Frew signed up and hungry for success 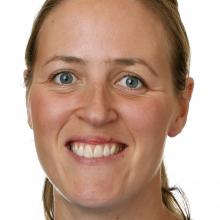 Wendy Frew.
The Southern Steel has secured its second key signing for next year, after veteran midcourter and captain Wendy Frew announced she will be back for another year.

Frew (31), who has played 106 games for the Steel since the franchise’s inception in 2008, will embark on her ninth campaign with the team in 2017, and joins Jamaican star Jhaniele Fowler-Reid in re-signing for next year.

Frew only missed  the 2012 season due to pregnancy and captained the Steel in all 15 matches this season.

She played for the Southland Sting in the National Bank Cup from 2001-2007, meaning next year will represent her 15th season of elite netball.

"I’m excited to pull on the Steel dress again. Every year, it’s a real honour to play for the franchise and the southern community," she said.

"The support we’ve had this year has been unbelievable and it’s a great feeling to play for our whole Steel family."

Frew led the Steel through an unbeaten regular season campaign this year, just the third in the ANZ Championship’s history, before her side lost both playoff matches.

"It’s still pretty depressing that we couldn’t go all the way, because I truly felt our team had the goods to do it.

"But it also adds a lot of fire to the belly. Next season can’t come soon enough."

Frew has two young children, aged 3 and 8 months, and has become accustomed to balancing sport and family life.

"It’s always hard to leave the kiddies but it also makes me even more motivated to train and play to my full potential and make it worth the sacrifice.

"Every year you have to work harder and I challenge myself to come back in better shape than I was before."

"Wendy is the kind of player you build a team around. She epitomises the values and work ethic we expect from all of our players and her leadership is invaluable."