Steel makes use of machine learning 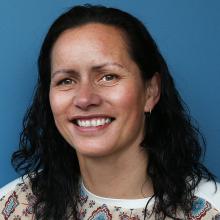 Reinga Bloxham
A new technology has helped the Southern Steel get a leg up over the past two seasons.

The franchise has made use of the Otago Polytechnic’s "machine learning" — a new form of artificial intelligence that can find patterns in large, complex data sets.

For the Steel, that meant being provided with something of a scouting report for opposition teams, analysing trends from past games.

"I suppose they look at a few things," Steel coach Reinga Bloxham said.

"So if opposition were looking at us, they’d know Gina [Crampton] receives quite a lot of centre passes, so you’re looking at those sorts of things.

"You might look at what other teams have done that have caused errors or turnovers, those sorts of things as well; there’s quite a few things like that."

The information could relate both to a trend in the overall team, as well as what an individual did.

That was useful for both players and coaches in preparing for games, as it either confirmed their thoughts or made them take a second look.

"A lot of the time you watch and you sort of have a gut feeling about things.

"Generally, a lot of the time, it does confirm what you’re thinking. Then, other times, it does pose other questions and makes you stop and think about ‘well, actually, this is what the data says, so maybe we need to stop and look at that next time’."

She said the players enjoyed it and  the polytechnic’s Hayden Croft and his team had done a great job of educating the team on how to make sense of the data.

While the team tended to focus on its own game plan, it would make small adjustments within that depending on the opponent.

She used the example of a player such as Maria Tutaia — a fantastic shooter who was a confidence player.

That could cause the team to change its defensive structures slightly, to try to limit the ball she got. With other teams, it could be other players in different positions the team made those adaptations for.

The machine learning had also been used by the Otago rugby team.

Its results were to be published in the International Journal of Performance Analysis in Sport.