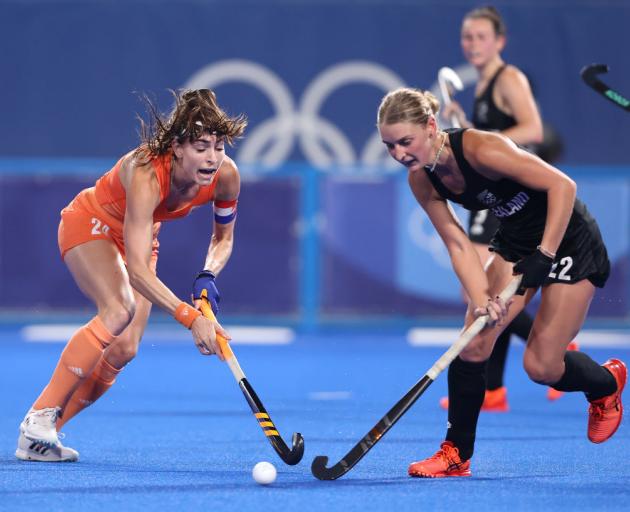 Eva Roma Maria de Goede of Netherlands and Katie Doar of New Zealand battle for the ball during the Women's Quarterfinal match. Photo: Getty Images
The Black Sticks women have been knocked out of the Olympic Games, being stifled 3-0 by the Netherlands in their quarter-final match-up.

Drawing the world's No1-ranked side in their first knockout match, the New Zealand side were pushed from start to finish, with the Netherlands playing a possession-heavy style of hockey to force their counterparts to work and tire in the Tokyo heat.

As has been a factor in a number of sports at these Olympic Games, the 30C heat appeared to take its toll on the Kiwis. The Dutch side passed the ball around with precision and had plenty of flow about their attacking play. The Netherlands weren't trying to force anything, but trusted in their ability to maintain possession and open up holes in the opposition defensive system.

That approach had positive results early on as the Dutch side found their way into the circle often and launched shots at goal.

The pressure was eventually reflected on the scoreboard when a quick free hit taken deep in their own half launched a counter attack, and the ball was sent into the circle for Lidewij Marsia Maria Welten to tap home ahead of the stick of goalkeeper Grace O'Hanlon.

While the final score was a fair reflection on the match, the way the second and third goals came were a bit unlucky for the New Zealand side.

After a Netherlands penalty corner struck New Zealand's Megan Hull on the top of the face mask when she was standing inside the goal post to defend the play, they were awarded a penalty stroke due to a New Zealand player deliberately blocking the goal with something other than their stick.

Frederique Matla made no mistake with the ensuing penalty stroke, leaving O'Hanlon no chance of keeping it out.

The final goal of the game came from a third-quarter penalty corner, which Lauren Lara Jeanette Stam snuck in down the side of the New Zealand goal.

Ultimately, the New Zealand side were run off their feet as the Netherlands played with 69 per cent of possession. It was telling in the number of times each team was able to penetrate the attacking circle – with the Netherlands working inside it 28 times to New Zealand's 3.

The Netherlands forced plenty of good saves from O'Hanlon throughout the contest and ended the game with 16 shots at goal to New Zealand's four.