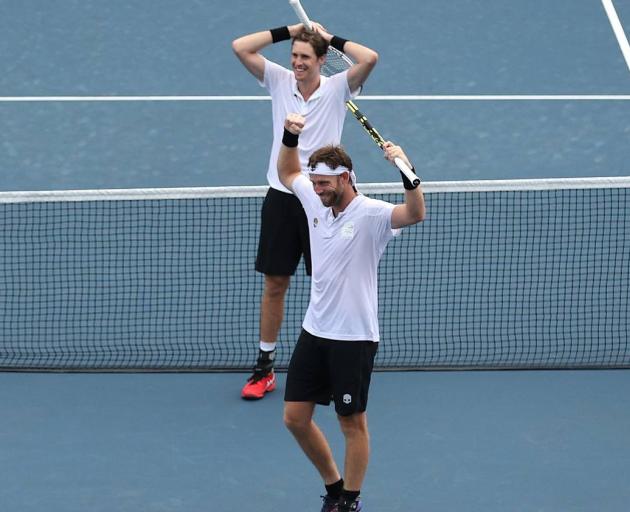 After losing their semifinal comprehensively, the Kiwis rebounded superbly in the third place playoff, with a 7-6 (3), 6-2 victory over the United States combination of Austin Krajicek and Tennys Sandgren.

It was a tight, tense match, befitting the circumstances, and Venus and Daniell rose to the occasion superbly in the 108-minute battle.

They showed flair, finesse and most importantly focus, refusing to let the pressure of the moment get to them.

Venus and Daniell are the first New Zealanders to win an Olympic tennis medal since the legendary Anthony Wilding, who took bronze in 1912 in Stockholm representing Australasia.

It's a stunning achievement. Tennis had a hiatus from the Olympics between 1924 and 1988, which meant the likes of Chris Lewis, Onny Parun and Russell Simpson couldn't participate, but no Kiwi has come close to the podium in the last three decades.

Venus and Daniell are longtime Davis Cup teammates but have barely played together over the last few years and weren't in the conversation among global tennis scribes, when medal prospects were being discussed before the Olympics.

It's also deserved recognition for the duo, whose ATP achievements can go under the radar, toiling in far flung places, with unfavourable time zones.

After being outplayed by Croatia on Thursday, the Kiwis were back to their best. They dominated with their net play, their movement was exceptional and they served without nerves or fear.

Their superiority came through in the first set tiebreak, making all the right decisions to take an early lead, then maintaining the advantage. The Kiwis lifted to another level in the second set and their opponents couldn't stay with them, broken twice.

After both teams traded holds, Krajicek was under early pressure in the first set, 0-30 down in the third game. The world No 48 then displayed lovely touch, painting the corners with a couple of delicately placed lobs.

2019 ASB Classic champion Sandgren made his name in singles, reaching the last eight of the 2018 Australian Open. But he has solid doubles experience and a booming serve.

After their issues against Croatia, the Kiwis looked dialled in early, full of energy. They had a break opportunity in the seventh game, but the left handed Krajicek managed a wickedly angled serve.

It felt like a key moment. The level of tennis hit new heights – from both teams – and Daniell was pushed to deuce on serve, but showed impressive mental strength to see off the danger.

Like they did against Colombia, New Zealand were superb in the tiebreak. They rocketed to early 6-1 lead, with a slashing crosscourt forehand from Venus producing a guttural roar from the 33-year-old. The Americans saved two set points, before Venus converted the third.

An early break of the Sandgren serve continued their momentum in the second set, before Daniell came up with a gutsy hold in the third game, fending off a break point.

The United States were in trouble at 0-3, saving two break points to stay in the contest. That lifted the Americans, who came close to breaking back, before some clutch serving from Venus.

Sandgren eluded two break points at 1-4, before Daniell held for a 5-2 lead.

That put the Kiwis on the edge and they finished in style, racing to a 0-40 advantage before a crisp forehand volley from Venus converted their first match point.