Call to focus on changing nature of society

Part of the audience attending the Connecting Coaches: Coaching Young Athletes in a Changing World conference at the University of Otago yesterday. Photos: Gerard O'Brien
The changing nature of society and what it means for sport will have to be a focus for coaches in the future, a conference in Dunedin has been told.

Robyn Cockburn is a leading researcher  studying participation among groups and worked on the New Zealand Rugby respect and responsibility review as its researcher and writer.

She was speaking at the Connecting Coaches: Coaching Young Athletes in a Changing World conference at the University of Otago on Friday.

More than 100 coaches from around New Zealand are attending. Other speakers include Gordon Walker, who coaches Olympic champion Lisa Carrington, and triathlon coach John Hellemans. The conference concluded on Saturday.

Cockburn said sport was changing in so many ways and coaches had to understand that.

The traditional sports were declining, people were seeking alternatives and many sports were being modified to suit needs.

Opportunities were becoming more tailored to what people needed and there were new forms of recreation being offered.

Cockburn said research showed what motivated children to play sport and boys and girls were considerably different in that regard. 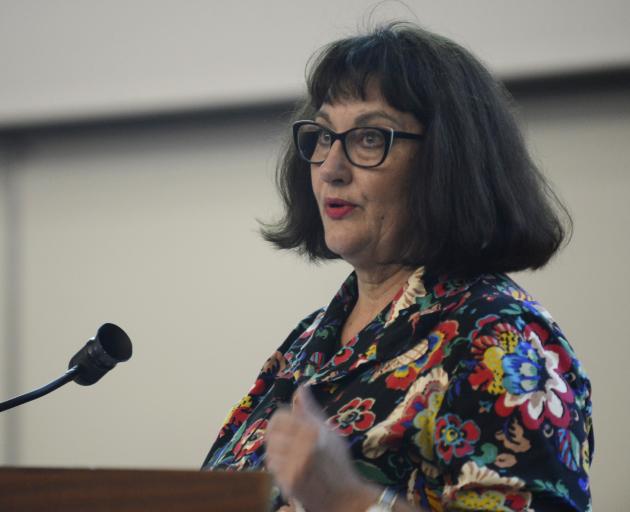 Researcher Robyn Cockburn speaks at the conference yesterday.
The peak years for participation were between 12 and 14, after which it declined. There were many barriers to sport and many coaches did not recognise them.

She said it was easy to see when a part of someone’s body was missing but  if a person’s disability was hidden it was often too hard for them to become involved in sport.

The barriers had to be understood at a personal, family and community level. Also, New Zealand’s increasing diversity was going to have a major impact on sport in the future.

By 2038, Asians, Maori and Pasifika would make up 51% of New Zealand’s population.

Since 2010,  37% of migrants to New Zealand had been Asian. The All Blacks  had been made up of equal parts

Maori, European and Pasifika. Yet the only way this diversity was reflected was in the use of the haka.

She said "if you did not understand all what the athlete brings then you are not going to get everything from the athlete out on the field".

Also many Asian migrants  were not familiar with the concept of volunteering,  which had an impact on sport given its reliance on volunteers.

Also lacking was female representation in top-level coaching. For example, in the New Zealand team which went to the Rio de Janeiro Olympics there was an even split of male and female athletes but only four out of the 41 coaches  were women.

She said that was slowly changing.

The old method of coaching was also changing as athletes wanted more input.

A theme of the conference was  how to achieve a better balance for young athletes. Specialising in a sport at a young age could be very hard on a young person and childhood success was not a reliable predictor of future success.

The focus for young people should not be on winning but  development.