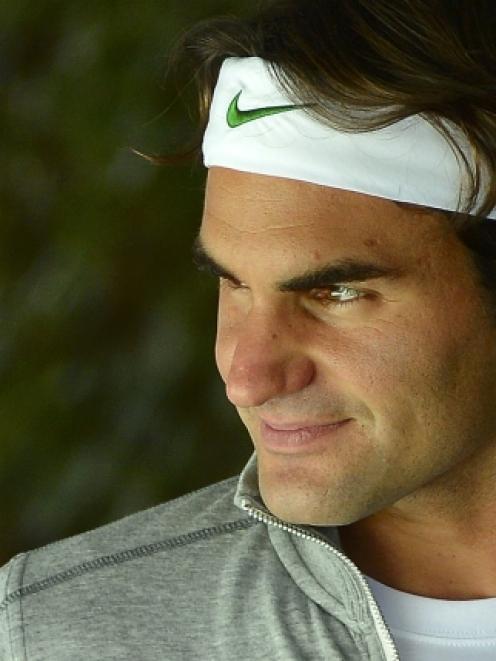 Roger Federer of Switzerland looks out across practice courts at Wimbledon in London yesterday. REUTERS/Toby Melville
For all its tradition and prestige, there is an unmistakable sense swirling round Wimbledon that this year's tournament is a dress rehearsal for a bigger sporting occasion.

Just weeks after the tournament finishes, the sport's best players will shed their whites and return to South West London wearing international colours for the Olympics.

It is hard to imagine the greats of tennis seeking rewards beyond the traditional four majors that have come to define the success or failure of any player's career.

However, Wimbledon champion Novak Djokovic believes the Olympics are "the pinnacle of all sports", his nearest rival Rafa Nadal described them as the "most important competition in the world of sport", while Serena Williams is starting to get "little butterflies in (her) stomach" as the London Games loom closer.

Since the reintroduction of tennis into the main Olympic programme in 1988, the sport's big box office attractions have frequently seen it as a distraction, while some have avoided the competition altogether.

However, the Games now seem to have a unique pull on the top stars.

"It is very emotional because it is not just you who matters there, it's the whole nation," Djokovic told reporters on the eve of starting his title defence at Wimbledon.

"So there is a huge excitement going on with all the tennis players prior to the Olympic games.

"I had this honour to be representing my country four years ago in Beijing. I won the bronze medal, so it was one of the best achievements and best feelings I had as a professional athlete."

Djokovic may only have come third in Beijing, but the achievement brought tears to his eyes, while 16-time grand slam winner Roger Federer also wept when he won gold in the doubles event the same year.

"If he won a doubles grand slam I don't think he would have been as emotional," was world No 4 Andy Murray's take on the Olympics.

"Even Novak winning a bronze medal and being in tears. You wouldn't see that losing the semifinals of a slam."

Williams also won the doubles gold with her sister Venus in 2008 and has her fingers crossed the duo will be selected to play together again in London.

"That would be great if we had an opportunity to play doubles again," the 13-time singles grand slam champion said.

"I played two Olympics, which is pretty awesome, and have two gold medals, which is even better.

For players used to the lonely sporting existence of travelling the world and representing only their own interests, the Olympics offers an opportunity to play for their country and be part of a team.

Serbia's Djokovic, Spain's Nadal and Russia's Maria Sharapova have been confirmed as their countries' flag bearers for the opening ceremony, while Federer is expected to take on the role for Switzerland for the third time in succession.

"All the tournaments we play - we play as individual tennis players," Djokovic said.

"There are very few competitions as the Olympic Games where we can feel the team spirit, as in Davis Cup. But this is even more.

"It makes you really proud of wearing your national colours, having athletes from your country coming to support you, going to the Olympic Village and of course the opening ceremony."

National colours will be on show at Wimbledon for the duration of the Games, with the All England Club's all white dress code being jettisoned.

It will not be the only change from the grand slam, which gets under way today.

The best-of-five set format used in majors will be replaced with the fast and furious best-of-three that is used on the rest of the tour.

This means players need to be on their guard against costly errors and occasional lapses in concentration that can be more easily punished in the shorter form of the game.

This will perhaps open the door to players outside of the top three of Djokovic, Nadal and Federer, who have won 28 out of the last 29 major titles.

Out of those three, only Nadal has an Olympic singles gold to his name, won in Beijing in 2008.

Britain's Murray, who has suffered more than most at the hands of his three main rivals, losing three grand slam finals, is among those hoping to muscle in on the medals.

"I think maybe 10 years ago a grand slam was probably viewed as being bigger in tennis," he said.

"But now everybody's playing the Olympics. No-one is skipping it.

"So I think winning a medal for your country is a big achievement."