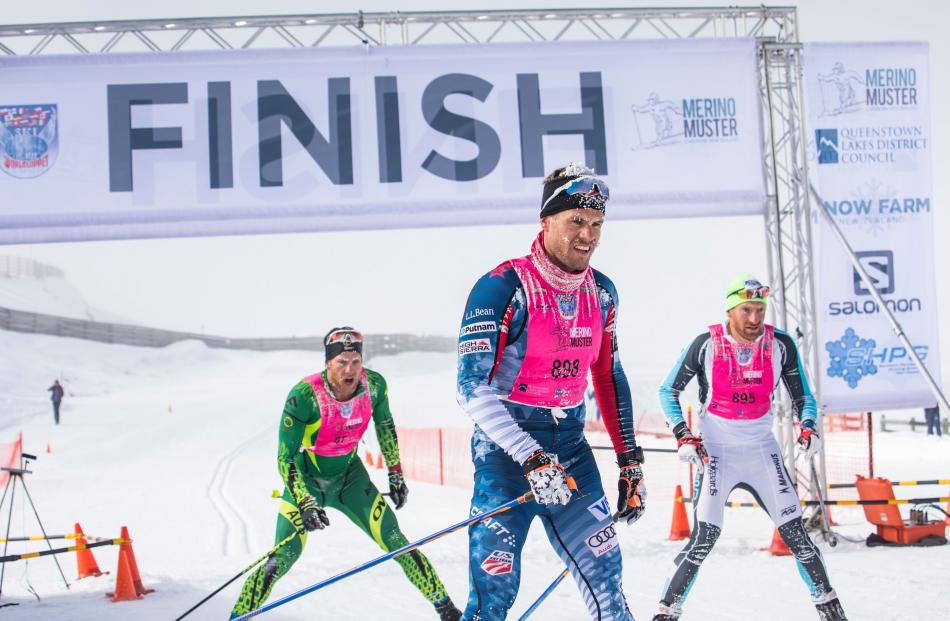 Americans Simeon Hamilton (centre) and Brian Gregg (right) and Australian Phillip Bellingham finished first, second and third respectively, all recording times within 1sec of each other in the 42km men’s ski marathon race at the Snow Farm, Wanaka, on... 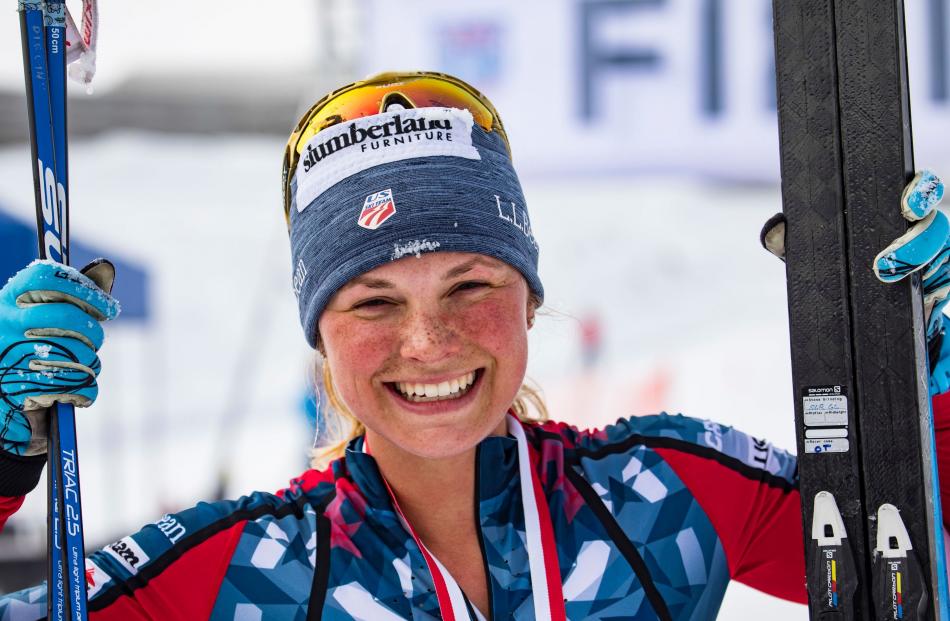 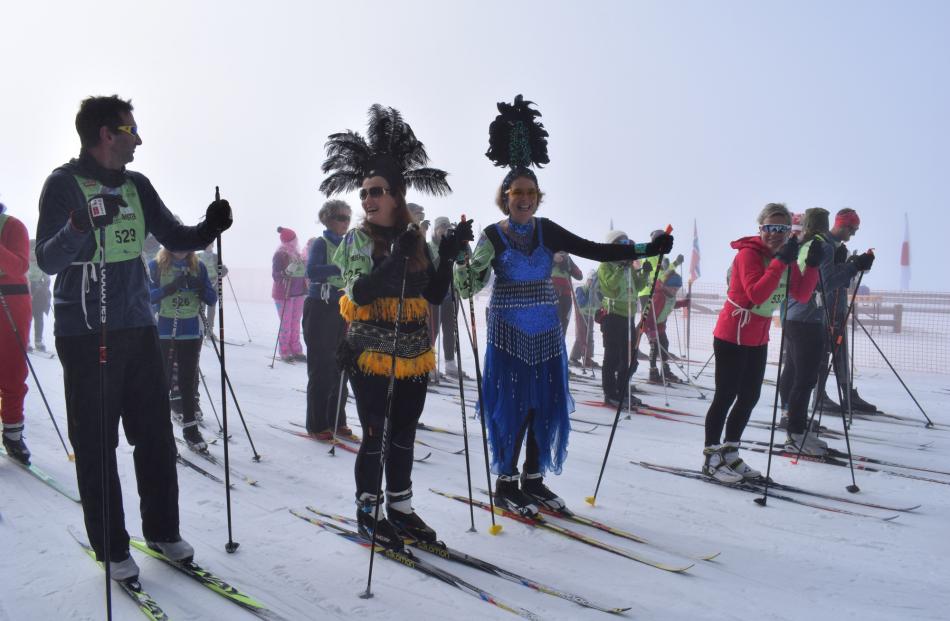 Straggle Muster entrants Phillipa Dobson-Brown, of Arrowtown (left), and Liz Maluschsig, of Wanaka, in their Brazilian dance outfits at the start of the 7km race. Photo: Kerrie Waterworth. 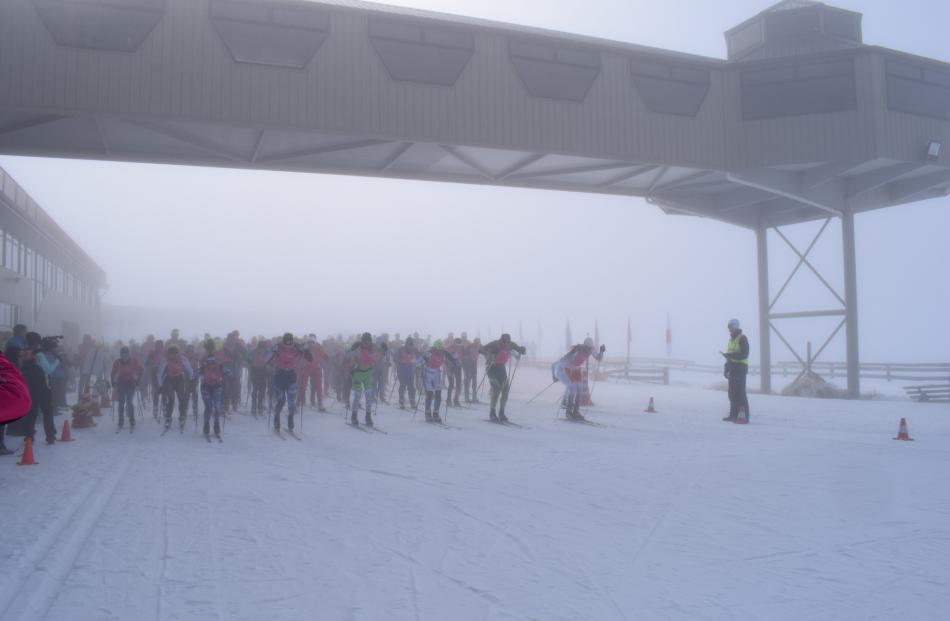 It was a foggy start to the 42km merino muster marathon at the Snow Farm on Saturday. Photo: Kerrie Waterworth.

There were no sheep in sight but the subzero temperatures resulted in many skiers and spectators wearing merino clothing at the 2017 Merino Muster at the Snow Farm near Wanaka at the weekend.

More than 200 skiers from 19 countries competed in the 42km marathon, 21km half-marathon and 7km cross-country ski races held  high up on the Pisa Ranges on Saturday as part of the Winter Games. The temperature was a chilly -5decC and the sun struggled to shine through the thick fog for the start of the 42km  race.

Although the sun did not break through until the finishing stages, organisers said the times recorded were some of the fastest in the 23-year history of the race.

First of the 85 skiers across the line in a blanket finish to the 42km marathon was American Simeon Hamilton in 1hr 40min 33sec. Second was fellow American Brian Gregg in 1hr 40min 34sec and third  Australian Phillip Bellingham in 1hr 40min 35sec.

It is the third year the 42km Merino Muster has been part of the WorldLoppet international sports federation of cross-country skiing marathons  after the signature race became one of the 20 WorldLoppet  races around the world. WorldLoppet president Juha Viljamaa, of Finland, was at the Snow Farm on Saturday and wished the competitors of all three races well before he himself competed in the 21km Snow Rake.

Afterwards he described the race as "nice and cool and ... run very professionally."

With the  Winter Olympics PyeongChang, South Korea, early next year, the Merino Muster was also one of the last opportunities for athletes to prepare.

Organisers said many of the more than 127 competitors who took part in the 21km Snow Rake and the 7km Straggle Muster did it "just for fun."

Phillipa Dobson-Brown, of Arrowtown, and Liz Maluschsig, of Wanaka, both skied the 7km Straggle Muster race dressed as Brazilian dancers. Dobson-Brown said last year she wore a Little Bo Peep outfit "but this year I thought we needed a complete switch around, and a Brazilian dancer was much more exciting and slightly sexy," she said.

Maluschsig said she had skied at the Snow Farm for the past 20 years and had "lost count" of how many Merino Musters she had participated in.

She said it was a "fun race" and dressing up made it a "a really enjoyable day."

John-Paul Lilbyne, of Arrowtown, delighted the crowd of New Zealand spectators and skiers by wearing a kiwi costume. He said he wore it every year skiing and last year wore it in a 90km race in Sweden.