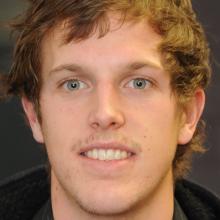 Rick Parry.
One down, two to go.

For just the second time in the 30-year history of transtasman ice hockey, the Ice Blacks have beaten the Australian Mighty Roos.

The home team delivered its fans a  4-1 win last night in the first of three test to be played at the Queenstown Ice Arena as part of the Winter Games. While the young Australian team  dominated the opening minutes of the game, it was the Ice Blacks who struck first, through Andrew Cox , when Australia was down a man due to a two-minute penalty.

New Zealand goalie Rick Parry was continually tested by the Australian offence for most of the first period, but each time the Roos had a shot on goal Parry found a way to keep the puck out of the back of the net.

With two minutes left in the first period,  the home side scored again through its man of the match, Aleksandr Polozov,  after the sustained period of pressure from the Australians failed to amount to anything.

Ahead by two goals, the Ice Blacks matched the Australians throughout a very even second period.

Parry and his defensive team continued to deny the Australians, which led to his name being chanted by the crowd each time he saved a goal. With less than five minutes left in the period, New Zealand centre Paris Heyd found himself open with only Australian Charles Smart  to beat.

Heyd easily slid the puck past the Australian goalie to give the New Zealanders a short-lived 3-0 lead. Straight after the restart, the Ice Blacks were caught napping on defence by Australian left wing Brendan McDowell, giving the Roos a glimmer of hope going into the third and final period 3-1 down. But the Ice Blacks scored first in the third, as Polozov took his second goal of the match and sealed the win for the home team.

New Zealand’s previous win against Australia, in 2011, also came at the Winter Games, when the series was held at the Dunedin Ice Stadium. The record between the two countries now stands at 15-2 and the Ice Blacks will be confident they can add to their win when the puck drops tonight. The second of the three tests starts tonight at the Queenstown Ice Area at 7pm and the third and final test is tomorrow at the same time.