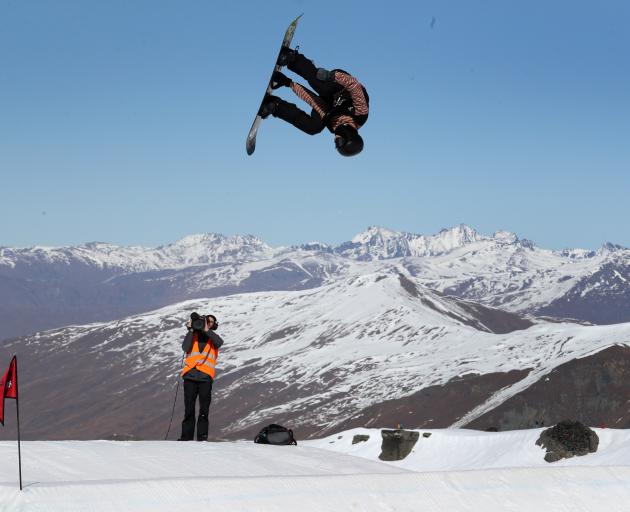 New Zealand snowboarder Carlos Garcia-Knight takes to the sky during his final run on his way to third at the Winter Games snowboard slopestyle world cup final at the Cardrona Alpine Resort yesterday. PHOTO: WINTER GAMES NZ
With the Winter Olympics only five months away, two young New Zealand Olympic hopefuls have got their build-up to the Games off to an almost perfect start.

Both the men's and women's fields were full of some of the top freestyle snowboarders in the world, including Olympic medallists.

As the last qualifier, Wanaka's Sadowski-Synnott was the first competitor out of the gates but she made her mark on the competition with a run which included a double back-flip, to leave her sitting third after the first round with a score of 68.58. 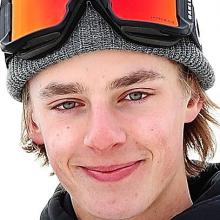 Carlos Garcia-Knight
Needing to improve on her first-round score to have a chance of keeping her position on the podium, the young snowboarder ironed out the flaws from her first run and hit the double back-flip again to increase her score to a 74.76 and secure herself third place.

``I cleaned up the rail section and got the grabs. Finishing with a medal is definitely the cherry on top.''

American and Sochi Olympic gold medallist Jamie Anderson took the top spot for her third win in a row at the Winter Games.

She also brought out a new trick for the first time in competition, a double 900.

``I just learned it [the double 900] a couple months ago and I haven't done it in a contest, and it felt really good.''

In the men's competition, Garcia-Knight had to land an almost flawless second run after making a costly mistake in the first.

To guarantee himself a podium finish, the Christchurch snowboarder had to pull out a run he had never completed before in competition, landing back-to-back 1260s, three and a-half full rotations of his body and snowboard. 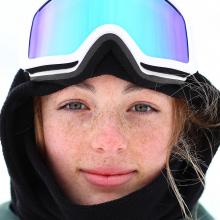 Zoi Sadowski-Synnott
Gold in the men's competition went to Norwegian Marcus Kleveland who scored highly on both of his runs with technical tricks spun in multiple directions.

At the forefront of all the athletes' minds in the finals was the vital Winter Olympic qualifying points on offer only five months out from the games.

Both Garcia-Knight and Sadowski-Synnott will be looking to impress the New Zealand selectors during the coming months at different world cup events in the northern hemisphere in order to make the team for the Winter Olympics in South Korea starting next February.