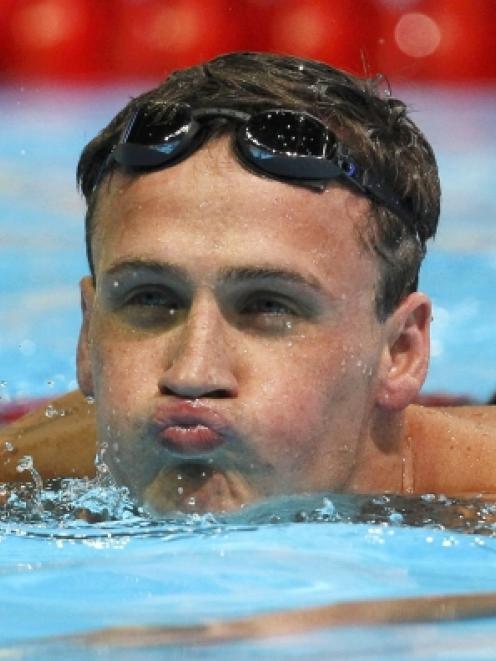 Lochte comfortably prevailed in the opening round of his heavyweight clash with Phelps when he won the 400 metres individual medley, slowing down near the end and gliding into the wall in four minutes 07.06 seconds.

Phelps, who had led after the opening butterfly leg but dropped back to third place heading into the final freestyle leg, finished second in 4:07.89, while Tyler Clary, the silver medallist at last year's world championships in Shanghai, came third in 4:09.92. Only the top two go to the Olympics.

"The first race is always the hardest," said Lochte, who already has six Olympic medals, including three gold, from his previous two trips to the Games.

"It feels great to be on the team. Now I can take a deep breath and relax ... I've still got so many events left in this meet."

After winning five gold medals in Shanghai last year to surpass Phelps as swimming's new standardbearer, Lochte is expected to swim in at least six events at London.

Phelps won the 400 medley at each of the past two Olympics and holds the world record at 4:03.84, which he set when he won his record eight gold medals in Beijing.

But the 26-year-old, who had struggled for motivation after the last Olympics, had initially planned to drop the gruelling event from his programme before having a late change of heart.

"I was very pleased with that," said Phelps, who is set to go head to head with Lochte in up to five events at the trials.

"There was a lot of discussion about this race but in the end I wanted to do it. This is an event I have done my whole career and I want to finish my career with it."

Peter Vanderkaay, who teamed up with Phelps and Lochte to win gold in the 4x200m freestyle relay at each of the past two Olympics, also secured his place for London when he won the 400m freestyle final.

The 28-year-old Vanderkaay was the oldest man in the final but charged through on the final lap to beat his younger rivals and win in 3:47.67, just ahead of Conor Dwyer (3:47.83).

"It definitely means a lot," said Vanderkaay. "I just wanted to get my hand on the wall, I was in some deep pain."

Elizabeth Beisel, the world champion for 400m individual medley, won her pet event in 4:31.74, with Caitlin Leverenz(4:34.48) second in the last of the three finals contested on the first day of the trials.