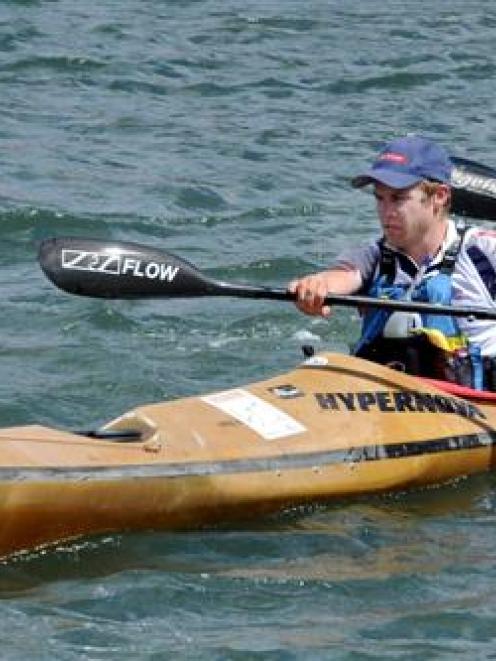 Hamish Fleming (left) and Pete Smallfield begin the kayak stage of the adventure challenge on Otago Harbour on Saturday. Photo by Craig Baxter.
It may have been a year of mixed fortunes for Pete Smallfield, but the 22-year-old Dunedin man rounded it off in style on Saturday.

In May, Smallfield broke an ankle in training, and he had to wear a moon boot for nine weeks.

The enforced layoff may have worked to his advantage, as he returned to the sport in September to win the Dunedin six-hour adventure challenge with Tim Farrant in a remarkable time of 3hr 27sec.

On Saturday, Smallfield and Fleming dominated the mountain bike stage from the start, midway between Bendoran Hut and Bucklands Crossing, inland from Waikouaiti, and then had a strong bush trek in the Silverpeaks.

The pair entered the water for the out and back kayak section between the Otago Yacht Club and Aramoana holding a 45min lead over Wilson and Vianna.

Despite high tide and blustery conditions on the harbour, Wilson and Vianna reduced this deficit to just 20min at the Aramoana checkpoint, and on their return to the Otago Yacht Club were just 8min adrift of the leading pair.

Smallfield and Fleming had enough of a lead off as they ran down Anzac Ave and up Lower Stuart St to the Octagon finish to beat the clock in 11hr 58min.

Race director Josh Harris was thrilled with how the leading teams tackled the technical course in the Dunedin City Mazda-sponsored race.

''Pete and Hamish smashed the course out,'' he saidSmallfield and Fleming will both now prepare for the Coast to Coast in February. Smallfield is targeting the two-day section, with Fleming eyeing another assault on the Longest Day, in which he finished 33rd in 13hr 45min 20sec last year.

Earlier on Saturday, adventure racing newcomers Brent Bachop and Fraser McGrouther were first to arrive in the Octagon after bailing out of the kayak section on Otago Harbour.

The Dunedin pair are more used to motors - McGrouther is a Dunedin car salesman, and Bachop a fleet manager with the Dunedin City Council - and decided to give it a miss because of their relative inexperience in the blustery conditions.

''We took the easy option and headed for home,'' Bachop said.

Finishing close behind, also after bailing out early on the kayak stage for ''strategic purposes'', were the East Taieri husband and wife team of Maria and Tony Gamble.

Tony has contested two Longest Day races in the Coast to Coast and also contested its two-day teams section, and Maria won the veteran women's section of Queenstown's Peak to Peak last year.

Another family combination to opt for a shortcut were Invercargill brothers Jason (27) and Aaron (30) Eyles.

A popular finish was that of the Dunedin pairing of Anne Gray and Tracey Bransgrove, who, according to Anne's husband Murray, ''did the event on no battle training at all''.

The pair also gained experience in the skills of kayaking.