Super Bowl: Can comeback be crowned? 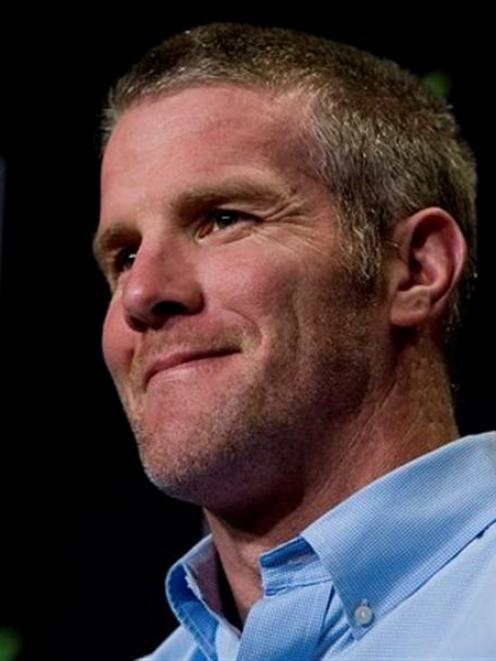 Brett Favre. AP photo.
Quarterback great Brett Favre, who this season came out of retirement for the second time, is now only one game away from playing in the Super Bowl at age 40. Mark Maske of The Washington Post reports.

When Brett Favre came out of retirement for a second time, it seemed to be with the hope of providing the Minnesota Vikings with the perfect complement.

The heavy lifting on a possible Super Bowl run could be handled by Adrian Peterson, a good offensive line and a solid defence - Favre merely needed to provide a threat in the passing game to keep opposing defences honest.

It hasn't quite turned out that way, with Favre instead having a Pro Bowl season while Peterson has all but disappeared from the offence in the second half of the season.

But the results have been highly productive, and Favre's successful comeback has produced a trip to New Orleans for a meeting with the Saints in Mondays' NFC championship game at the Superdome.

"I'm not surprised about where we are or the fact that we're playing in the championship game," Favre said after last Monday's 34-3 triumph over the Dallas Cowboys in an NFC semifinal at the Metrodome.

"I'm probably most surprised about how we've had to win some of the games and how we've got to this point.

"In talking to some of the guys prior to coming in, you know, not that I didn't want to make plays or be the quarterback they expected me to be, I was thinking, `Well, I'll throw about 15 times, hand it off to Adrian, kind of pick and choose where we throw and who we'll throw it to.

"We'll have the coverages we want. Our defence will be outstanding. So I can kind of just slip through the cracks. Boy, was I mistaken. I've been able to this point to answer the call."

Indeed he has, throwing 33 touchdown passes and just seven interceptions during the regular season to finish as the league's second-rated passer and end up fourth in the most valuable player voting.

Favre threw four touchdown passes on Monday, three of them to wide receiver Sidney Rice, and the Vikings will go to New Orleans as essentially a pass-first team.

Peterson ran for just 63 yards (57m) on 26 carries against the Cowboys. He was the league's fifth-leading rusher this season but has gone eight straight games without a 100-yard (90m) rushing performance.

"As I said during that press conference [last week before the Dallas game], this is what I came back for," Favre said on Monday.

"This is what this team expected. We expected to be in the play-offs. How can you not feel any different? That doesn't mean that you are going to win. But you have to be confident, and in order for us to win this coming week, we have to play the same way. We have to play outstanding football.

"We know we're capable of it. We'll see what happens."

It has been another career revival for Favre at age 40. His first comeback last season with New York ended with a disappointing finish in which he was plagued by a sore arm and threw interceptions in bunches late in the regular season while the Jets unravelled and missed the play-offs.

This time around, Favre appears healthy and relatively fresh late in the season. At least for now, he looks like a quarterback capable of playing a few more years if he so desires.

"We'd love to have him back," Rice said. "But that's not the focus right now. The focus is February 7th and holding that [Super Bowl] trophy up in the air for the whole team."

The second-seeded Vikings and top-seeded Saints righted themselves over the weekend after stumbling down the stretch during the regular season.

The Vikings lost three of four games at one point in December, and the focus became Favre and coach Brad Childress reportedly clashing over Favre's propensity to change running plays to passing plays with audibles at the line of scrimmage.

The Saints beat the Arizona Cardinals 45-14 on Sunday in the other conference semifinal after losing their final three regular season games.

"You work your tail off to get this bye and then you disappear for that week when everybody is playing," Childress said.

"There is really no story except that you are resting. You are a pretty good football team to get one of those two byes. In the end, you got the No 1 and No 2 teams in the NFC for most of the season that are going to play for the NFC championship."

The game will be a match-up not only of Favre and fellow Pro Bowl quarterback Drew Brees, but also of Favre and the team for which he rooted while growing up in Mississippi.

"All of the years that I pulled for the Saints - and I told [Saints coach] Sean Payton that way back when," Favre said.

"He and I have talked periodically, and I think he has done an outstanding job. I told him secretly I'm a Saints fan. We didn't think we were going to actually play. There was always an outside chance, but go figure.

"Now I'm going to be involved in a game that either they go to the Super Bowl or are knocked out. All of those years - I never wore a bag over my head, but I remember those days. Obviously, it is a lot different football team now. They are playing outstanding in their place."

A possible Super Bowl match-up against either the Jets, his most recent former team, or Indianapolis Colts quarterback Peyton Manning, the only player with more MVP awards than Favre's three, looms if the Vikings win this weekend.

But first, Favre and the Vikings would have to spoil the prospective storybook season of the Saints.

"The Saints are explosive," Favre said.

"We all know that. They are explosive on defence as well. So I think it's easier said than done that you contain them. It's the Superdome.

"I don't think too many people down there will be compassionate that I'm with the Vikings coming in. They've waited a long time for it. That's going to be a factor that we have to handle, obviously. I think it goes without saying how happy I am that we have this opportunity."

•Started 253 consecutive games (275 including play-offs), the Packers franchise record, longest stretch by an NFL quarterback, and the league's second-longest streak recorded among all positions.

•With 16 seasons in a Packers uniform, matched Bart Starr (1956-71) for most in franchise history.

•Possesses a 43-6 home record including play-offs when the kick-off temperature is 1degC or below.

•First NFL completion was to himself, the quarterback snaring his own deflected aerial for minus-7 yards in contest at Tampa Bay September 13, 1992.

•Established the Brett Favre Fourward Foundation in 1996; in conjunction with his annual golf tournament, celebrity softball game and fundraising dinners, foundation has donated more than $US3 million ($NZ4.2 million) to charities in his home state of Mississippi as well as to those in his adopted state of Wisconsin.

•Favre Fourward Foundation in 2005 took on an additional cause as a supporter of Hurricane Katrina relief; the effort raised approximately $1 million to assist in the state of Mississippi's three Gulf Coast counties: Hancock, Harrison and Jackson.

•His high school, Hancock North Central (Kiln, Mississippi), honoured him in May 2004 by renaming its field, Brett Favre Field, and unveiling a life-sized statue of the quarterback at the stadium's entrance.

•Named 2008 PFWA Good Guy Award winner as "player who best helped the media do its job".