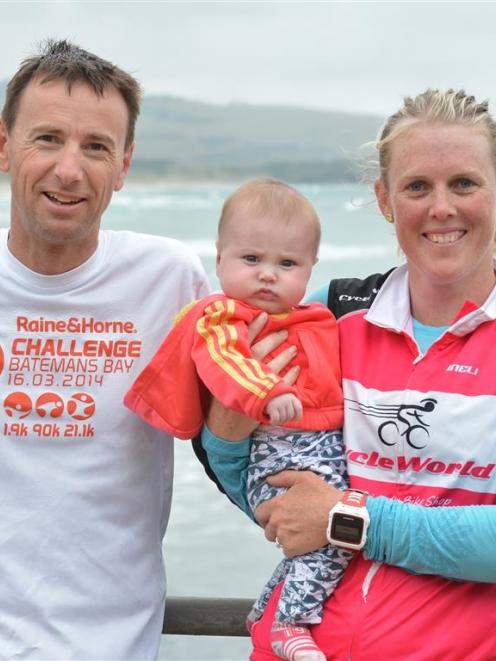 Tamsyn Hayes and partner Glen McSkimming with baby Anja taking a break from a training run at St Clair yesterday. PHOTO: GERARD O’BRIEN
The sport of ironman is all too familiar to Dunedin's Tamsyn Hayes, but now takes on an added dimension while she balances a desire to compete with that of motherhood.

Hayes (30) has competed professionally on the national and international circuit since winning the 18-29 age-group section of Challenge Wanaka in 2011 in 11hr 6min 53sec.

But following her victory in the Cromwell Triathlon early last year it all came to an abrupt halt when she found out she was pregnant after feeling unwell.

She immediately withdrew her entry from Challenge Wanaka in which she was favoured to be on the podium in the professional women's category.

Returning for a fourth time as a professional on February 20 will almost be like starting over for Hayes, following a troublesome pregnancy and an eventful first three months with daughter Anja, who was born on September 15.

Hayes suffered badly with morning sickness this time last year and, over the final two months of her pregnancy, was forced to rest after returning from a European holiday, where a viral infection hospitalised her in isolation.

Adding to the final stages of pregnancy was discomfort she had after her baby had kicked and cracked two ribs.

‘‘I basically had no immune system. I couldn't fight it off. For the last two months I couldn't do much at all, and spent a lot of time vomiting all day. It was a rough labour and a rough birth. Anja was in ICU for the first couple of days,'' Hayes said.

Hayes added that her strong muscular athletic body during her pregnancy played a part in the difficult birth of Anja and a rough start to her life.

With her own health now under control as well as that of baby Anja, Hayes has been able to resume a modified training schedule after Christmas, and recently marked a return to her work as a fitness instructor at Moana Pool.

‘‘I always thought that being pregnant and missing last year, that I'd be back for the next one,'' Hayes said of her goal to return for another Challenge Wanaka.

While pregnant, Hayes began thinking that she could start back with last December's 70.3 Taupo Ironman, but, with Anja suffering from bad reflux, combined with the realities of travelling up there with a baby, this idea was quickly shelved.

And such had been the drain on her own health, followed up with the extensive care of Anja in the first months of her life, there was no way that she was going to be in any condition to make competing possible.

‘‘She [Anja] was vomiting 20-plus times a day so there was just no way I was going to be ready to race,'' Hayes said.

The return to training after Christmas has been scheduled around Anja and a flexible programme from Cambridge-based coach Keegan Williams.

Hayes said it was far from ideal preparation for such an undertaking, and for the most part, she would be traversing the 226km Challenge Wanaka course involving a 3.8km swim, 180km bike and 42.2km run, on memory and desire.

‘‘I had false expectations as to what I was going to be able to do as soon as Anja was born,'' Hayes admitted.

‘‘Everyone sort of thinks that I'll just pop back to where I was. It was a pretty rough pregnancy, where I was unable to exercise. It feels like I'm starting again from scratch,'' she said.

Hayes said Challenge Wanaka provided more of a realistic starting point to make her return into ironman pro racing, with plenty of family and friends based there to support her.

Even though Hayes faces a pretty competitive field, with many international and nationally-ranked athletes entered to help recognise the event's 10th anniversary, she is hopeful of holding her own and targeting, at best, a top-five finish against the likes of six-time champion Gina Crawford (Wanganui) and Dutchwoman Yvonne van Vlerken, who has something like 80 podium finishes in ironman competition around the world.

Hayes is first to admither training and preparation has been far from ideal, but the flame of desire to compete at the top level is far from extinguished. 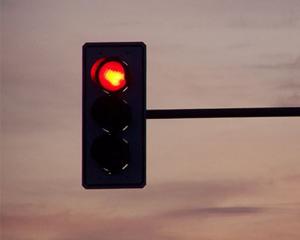