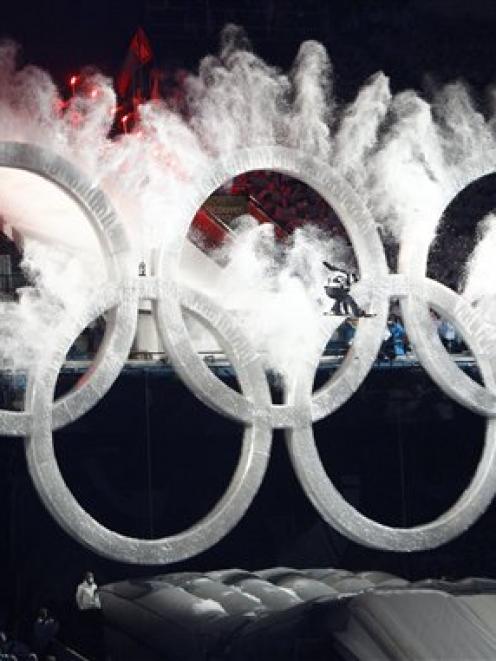 A snowboarder flies through the Olympic rings at the opening ceremony of the Vancouver Winter Olympic Games in Vancouver, British Columbia, Friday February 12, 2010. Photo by AP.
In time-honored tradition, the show went on.

Despite the training-run death earlier in the day of a luger from the country of Georgia, the Olympics' opening ceremonies were launched Friday night with a jubilant countdown by the crowd filling BC Place Stadium.

The festive mood, including a snowboarder's leap through giant Olympic rings, contrasted sharply with the grief that befell the games earlier in the day when luger Nodar Kumaritashvili died in a horrific crash on the sliding track at Whistler.

The ceremonies were dedicated to Kumaritashvili, and a moment of silence was observed in his memory. The seven remaining members of the Georgian team, who decided to stay and compete, wore black armbands as they marched behind a black-trimmed flag. Most of the crowd rose to give respectful applause.

"May you carry his Olympic dream on your shoulders and compete with his spirit in your heart," Furlong said.

More than 60,000 people packed into the stadium for the evening extravaganza, the first Olympic opening or closing ceremony ever held indoors. The loudest ovation came midway through, when the red-clad Canadian team - aiming for a first-place finish - entered the stadium as the last contingent of the parade of nations.

Later, a second, far larger cauldron was to be lit in a plaza along the downtown waterfront - giving Vancouver a visible symbol for the rest of the games that the indoor stadium could not provide.

Rain was forecast through the weekend in Vancouver, with high temperatures near 50 degrees, prompting some to dub these the Spring Olympics. Rain also has disrupted Alpine skiing events at Whistler.

About 2,500 athletes from a record 82 countries are participating in the games, vying for medals in 86 events - including the newly added ski-cross competition. First-time Winter Olympic participants include the Cayman Islands, Columbia, Ghana, Montenegro, Pakistan, Peru and Serbia.

The overall favorites include Germany and the United States - which finished first and second four years ago in Turin - and also Canada, a best-ever third in 2006 and now brashly proclaiming its intention to finish atop the medals table on its home turf.

The Canadian team marched exultantly behind flagbearer Clara Hughes, defending gold medalist in the 5,000-meter speedskating race. Prime Minister Stephen Harper was among the thousands in the stadium rising to applaud.

Just ahead in the parade were the Americans. Their flagbearer is Mark Grimmette, 39, of Muskegon, Mich., competing in his fifth Olympics as a doubles luge competitor. Kumaritashvili would have been one of his Olympic rivals.

It also highlighted performers and traditions from Canada's aboriginal communities. And the highest-ranking official delegation at the ceremony - amid dignitaries from around the world - included the four chiefs of the First Nations whose traditional native territory overlaps the Olympic region.

Special effects included a giant, sparkling polar bear rising from the stadium floor and hovering over some performers on a simulated ice flow. Later, Celtic fiddlers performed under a stadium-wide cascade of autumn leaves, and an acrobat on wires performed an aerial ballet to the strains of Joni Mitchell's "Both Sides Now."

Several well-known Canadians received the honor of carrying the Olympic flag at a high-profile moment near the end of the ceremony. Among them were hockey Hall of Famer Bobby Orr, singer Anne Murray, race car driver Jacques Villeneuve and Betty Fox, mother of national hero Terry Fox.

Terry Fox lost a leg to bone cancer as a youngster, then set off in 1980 on a fundraising trek across Canada. He had to give up after covering more than 3,000 miles, and died in 1981 at age 22, but remains revered by his compatriots as a symbol of courage and perseverance.

The flame reached the stadium after a 106-day torch relay across Canada, passing through more than 1,000 communities in every province and territory.

The relay was the occasional target for protesters, and Friday was no exception.

Activists espousing a variety of causes prompted the relay to change course twice as it passed near Vancouver's skid-row neighborhood, the Downtown Eastside.

Later, several thousand protesters marched to the stadium, where hundreds of police were waiting for them. A standoff lasted more than two hours - with some sticks and water bottles thrown toward the officers.