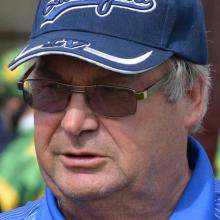 Michael Pitman
Leadnig trainer Michael Pitman had labelled the decision to cease racing at Waikouaiti as both ludicrous and ridiculous.

Pitman, who with son Matthew sits fourth in the premiership on 42 wins this season, said he was totally confused by the decision to shift Waikouaiti’s date on January 1 to Riverton.

The Yaldhurst trainer bases himself at Waikouaiti with a big stable of horses over summer.

"I like the people, I like the track, the facilities are great. So why do they want to shift it?"

Pitman had nothing against the Riverton track and the people at Riverton. He said they were good people and worked hard.

But it simply made no sense to have a meeting in Riverton on New Year’s Day.

"Who is going to go from Dunedin on Boxing Day, then to Timaru and then Kurow on January 30 and then travel all the way to Riverton on New Year’s Day?"

"It’s just ludicrous. At this stage there is no way we will be running at Riverton. Nothing against the Riverton people who are good people. But it is not a Riverton against Waikouaiti thing."

Pitman said he had spoken to senior people at the Racing Industry Transition Agency and at New Zealand Thoroughbred Racing and given his views.

He wondered how well those making up the calendar understood travel times in the South Island. He had sent them a map once to explain distances.

The long-standing Tuatapere sports day also took place on January 1, so Pitman wondered how big the crowd would be at Riverton.

The meeting at Waikouaiti attracted good crowds and a real mix of people who enjoyed the day out, and good on- and off-course betting figures, he said.

"There is a massive crowd there who sit up on that hill and enjoy the day out. They are quite happy sitting on the hill, getting a prickle up their backsides. But now they [ the racing authorities] want to stop that. It’s ridiculous."

Some of his best horses have raced at Waikouaiti and he fielded up to 18 horses at the meeting some years.

In 2012, he won seven of the eight races on the programme there so it had been a happy hunting ground for him.

Pitman said if Waikouaiti did not come back he was not sure whether he would head south as the future of the course and its facilities was up in the air.

After giving it their best, clubs must wait

Hopefully this is one of the first steps to abandon racing and gambling altogether. It is shameful that we still do this at the expense of animals.