Racing: Totara family a sure bet 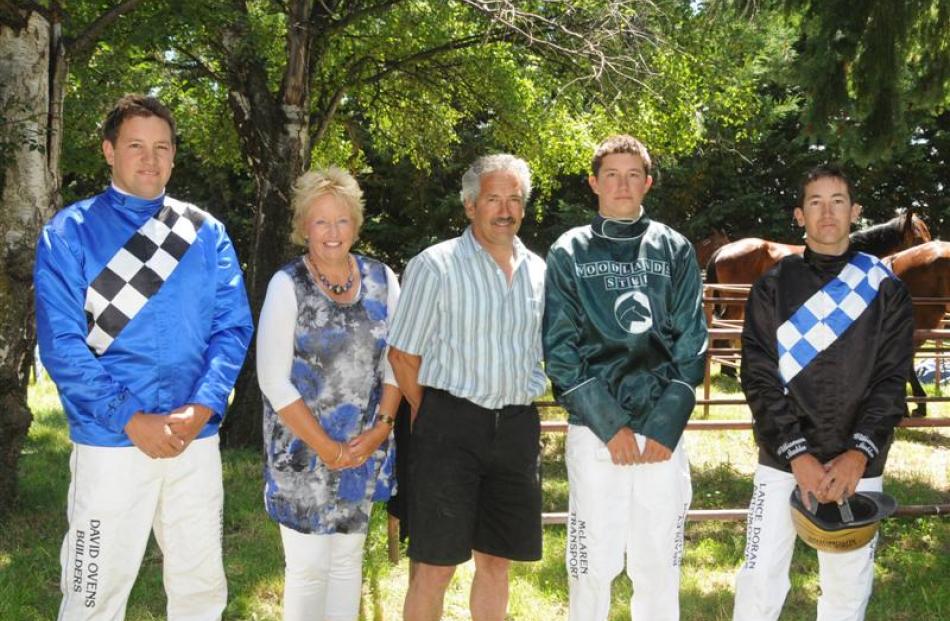 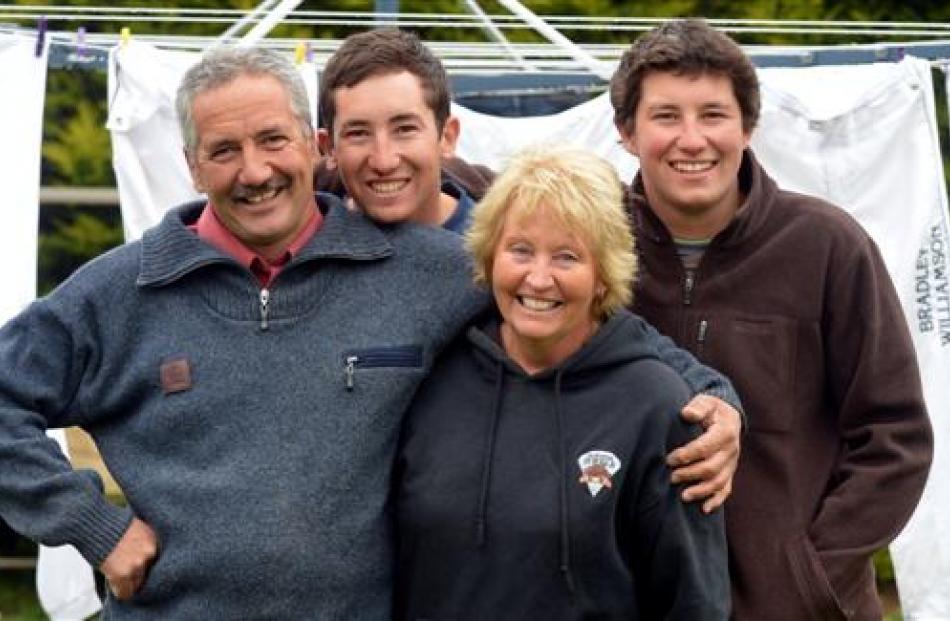 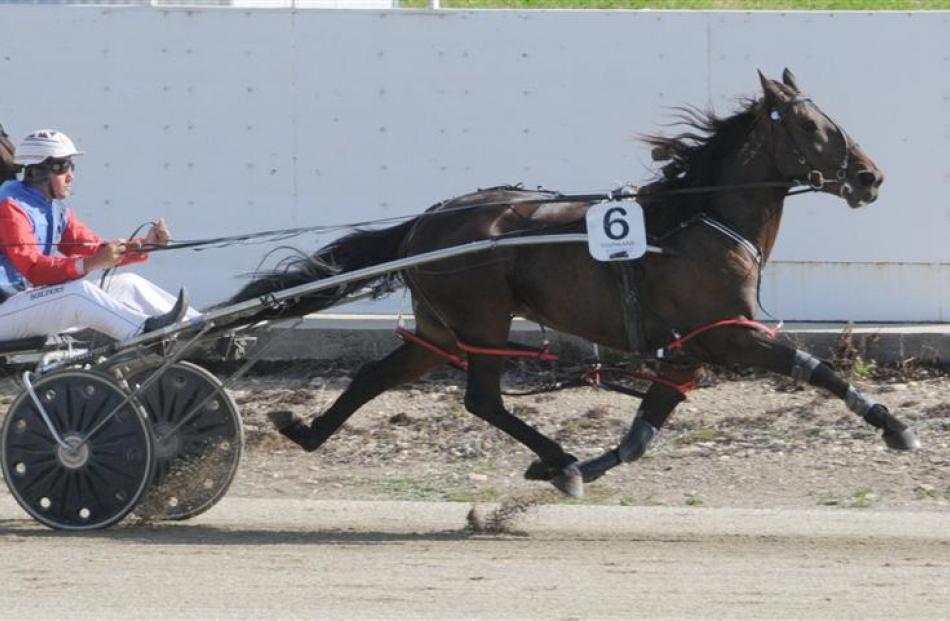 Nathan Williamson drives No Bettor to victory at Omakau in January. Photo from ODT files.

Following in their father's footsteps in the harness racing industry came naturally for the Williamson boys. Sally Rae speaks to the family about working together and staying friends.

As far as the highly successful North Otago trainer was concerned, they had to want to do it. But one by one, they started coming into the stable - first Nathan (now 24), then Matthew (22) and finally Brad (18) - as each decided they shared the passion.

''They've all basically got the disease without being asked to do it. I didn't force them into it. I wanted them to have the passion themselves.

''Racing's not a game of lucrative amounts of money. [It's] a game you have to want to do it for the love of it. If you can get a living out of it, you've done well. It's a way of life that we enjoy,'' Mr Williamson said.

Phil Williamson has enjoyed considerable success as a trainer since making the major decision to give up the security of a guaranteed income at the local tannery to follow his passion.

The family stable has won some major races over the years with horses such as Role Model, Let's Get Serious, One Over Kenny, Allegro Agitato, Leighton Hest and Springbank Richard. Now he and his wife Bev, who is an integral part of the operation, are also enjoying seeing their sons' succeed in the racing world.

''We're chuffed, there's no doubt about that. They've made not just a small impression but a big impression,'' he said.

The down-to-earth, engaging and hard-working Williamson family operate a busy stable from their property at Totara, just south of Oamaru.

Nathan Williamson is now based in Southland, where he trains on his own account, while Matthew and Brad work at the Totara stable when not away driving at races. Their sister Jasmyn (20) is studying at Lincoln University.

Matthew, who left school at the end of year 11 at Waitaki Boys' High School to start working for his father, acknowledged the siblings had been ''so lucky'' to have grown up in a racing family.

''Dad's just come in out of nowhere, got into it, got where he is. We've got successful already because [we] came with a start. Dad had to make his own,'' he said.

Phil Williamson grew up at Kaka Point, in South Otago, and was not from a horsey background. But next-door to Port Molyneux School lived a trainer called Len Tilson, who had a horse called Stella Frost who won the 1969 New Zealand Cup (she was

later disqualified for causing interference to another horse). The impressionable young Phil thought it looked exciting.

He started to listen to races on the radio - ''I used to listen to two things, the All Blacks playing and horse racing'' - and while he knew nothing about racing, he became ''infatuated'' with it.

After a couple of years of ''eating my lunch'' at South Otago High School, he was preparing to head back for his third secondary school year.

He was approached to see if he wanted to be a jockey.

''I said, anything that stops me going back to school sounds good to me''.

However, weight proved an issue and while he rode one winner, Frosty Light at Invercargill, he decided to ''flag it'' and get into harness racing.

He had his introduction to harness racing working for Alister Kerslake at Highbank near Methven, later moving to Oamaru to work for Dick Prendergast.

He did about a 20-year stint at the tannery, pottering around with horses in his spare time, until he made the big decision to quit work and train full-time.

''I thought if I was ever going to have a crack at training, I'd better to it now.'It was a ''big call'' - the children were young and while the work was ''not pleasant'' at the tannery, he had worked his way up to foreman and was making good money. But harness racing was his passion and, with the support and encouragement from his wife, whose family were involved in horses, they decided to ''have a crack''.

He acknowledged now it was the best thing he had ever done, starting with one horse and building up from there.

The Williamson children learned to ride on ponies borrowed from North Otago Riding for the Disabled in the school holidays.

They then ''pestered'' their father to let them try harness racing and, after getting approval from RDA, Mr Williamson did so. They then ''raced'' the borrowed ponies on the track and ''loved it'', he recalled.

As far as harness racing went, Matthew Williamson said he was ''not really that keen'' when he was younger, but his interest grew as he got older.

Seeing Nathan get involved and his father having ''a fantastic bit of success'' winning races probably helped.

He was not keen on school and horses became ''number one'', so he left school to join the stable. In the early days, Nathan and his father would both head away to race meetings and he would be at home ''chipping away''.

But his goal was always to drive horses and win races. After driving at work-outs and trials, his first race was a Kurow meeting at the Oamaru racecourse when he was 18.

He had seven or eight drives that day and he recalled how ''nerve-racking'' it was.

''I'd been waiting on it for a fair while. It's a whole different ball game, race day, to playing around at the trials. It takes a lot to get used to,'' he said. Several weeks later Matthew registered his first win, with a horse trained by his father, winning by a nose. Things had ''just spiralled'' over the years. He was getting more drives and ''things have really taken off'', although he admitted he still had a lot to learn.

Matthew said this season was shaping up as his best yet and winning the junior drivers' premiership was his main aim.

There was ''definitely'' rivalry among the three Williamson brothers, and also with their father. They all liked winning - and not only at the races.

And while he loved beating them, Matthew said: ''anytime I'm not winning, they are the person you want to see winning''.

Asked what made a good driver, he said being sharp and, like any sport, ''practice makes perfect''. He had learned a lot from his father especially.

Overall, Matthew believed the family operation worked well. ''It does all work. Like all families, you have your times. Working together, you see a lot of each other.

''It's just one of those things that's happened. All the boys haven't had any desire for anything else.''

And his father was a good boss, who had given his sons drives and opportunities.

''We've made mistakes and he's forgiven us. Luckily enough, we've got better.''

He had ''absolutely not one'' regret about joining the family business and his aim for the future was to ''just keep driving winners''.

For Brad, the youngest Williamson, the goal was similar - ''just pressing on, just trying to get winners''.

Phil Williamson reckoned his sons probably treated him ''like a big brother''. He was proud of how they had branched out and made their own names for themselves, stepping out from their parents' shadow.

Having been brought up around horses ''from day dot'' they were ''pretty naturally gifted'' and he had always had faith in them.

He was also very proud of daughter Jasmyn, who helped with the horses when she was home from university and shared the family's love of racing. The well-performed Jasmyn's Gift was named after her.

Asked the secret to the stable's success, the affable - and modest - Mr Williamson said he had been fortunate to strike some very good horses, including some ''superstar'' ones, and he paid tribute to the ''wonderful bunch'' of owners.

Added to that was ''probably a good work ethic and a pretty good understanding of the requirements of the training side''.

As to his own future, he said he would ''just keep doing what I do until the day they roll me into the hole''.

''If the boys end up taking over the training side of it, that would be great. I would willingly step down, have the boys take the reins.''