Bond the star turn as rowers gather for anniversary regatta

But Hamish Bond's drive to train worked to the advantage of rowers from around the world yesterday.

The two-time Olympic champion was on hand at the University of Otago's 150th anniversary international rowing regatta opening ceremony.

He proved popular as competitors from Japan, China and Russia swarmed for photos with the 33-year-old.

An orthopaedic conference his wife was attending brought Bond to town.

When he asked if he could use the University club's training facilities, he was in turn asked to speak as a guest at the ceremony. 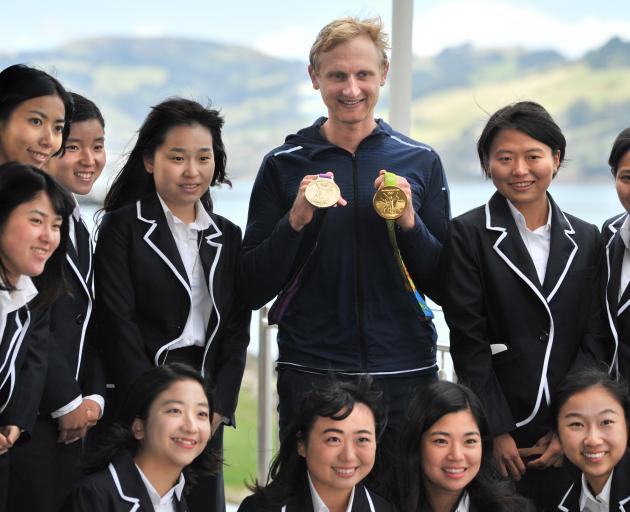 Bond displays his Olympic gold medals with members of the Keio University team.
He was enjoying being back in rowing following a stint in cycling.

After forming an unbeatable combination with Eric Murray in the men's pair, he has made a switch to the eight.

The crew did not qualify for next year's Olympics at the recent world championships.

However, claiming one of the final spots remained his focus.

''It was a bit of a challenge this last year, I enjoyed it,'' he said of the transition.

''Obviously, there's far more moving parts and I think one of the biggest challenges is you're only 12.5% of the crew, whereas in the pair you're 50%.

''It's difficult in some ways that you don't have as big an input on an individual basis.

''As hard as you try, sometimes it doesn't transfer through like it would in a smaller boat.

''So it really is about the collective effort and that's part of the challenge of being in a bigger boat.''

Training had been limited to the rowing machines during his visit so far.

If the wind was not blowing from the south, he might head on to the harbour, although so far he had run into ''classic Dunedin weather''.

Despite that, it brought back good memories.

''I guess that's where my foundation in the sport came from.

''I spent the first five or six years of my rowing career out here on the harbour and also out on the Henley River and Taieri River.

''So I basically learnt my trade here.

''I've always maintained that on a good day there's not many better places to row than on the Otago Harbour - it's just unfortunate the good days are few and far between.''

The university regatta will begin this morning, provided conditions allow.

A 5km race will be held on the harbour from 8am today, before racing moves to Lake Ruataniwha tomorrow to use the 2km course.

It returns to Dunedin with a 250m sprint on Saturday.

Races will be held for both women's and men's crews.