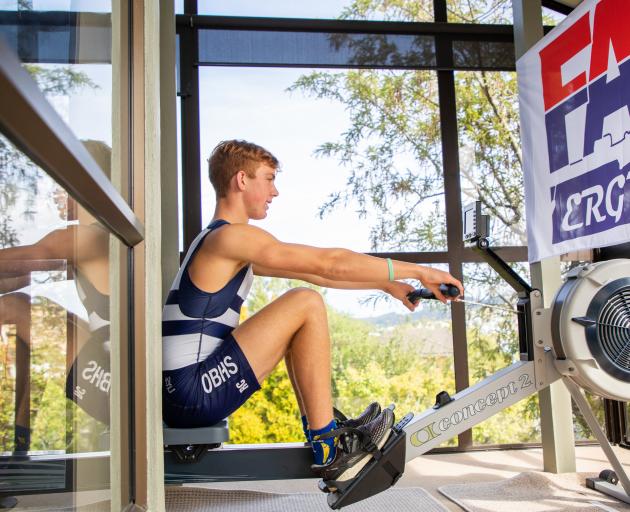 Reuben Cook on his way to a national record on Sunday. PHOTO: SUPPLIED
No Maadi Cup.

Bag a New Zealand record instead.

Otago Boys’ High School pupil Reuben Cook has been working his way through the season and was looking to climax at the Maadi Cup regatta at Lake Ruataniwha at the end of the month.

However, as Covid-19 swept through the nation, the Maadi Cup dream went out the window as the regatta was cancelled.

Cook (16), a year 12 pupil who won the under-17 singles and quads at the South Island secondary schools championships on Lake Ruataniwha earlier this month, found it tough as his dream went up in flames.

He admits it was hard to get over the cancellation.

"Since Maadi Cup has been cancelled I have been been pretty bummed out. I had peaked my season towards that and it all fell flat," he said.

"But I was going online and stumbled across the record and I thought ‘Why not?’"

Cook was after the 15-16 years 1000m erg record lightweight national record set by Daniel Bridgewater in 2004 at the Bay of Plenty championships.

He climbed on the erg at home in front of a crowd of one and tried to break the record of 3min 8.9sec.

At 700m, he thought he had a chance and he then managed to get through to set the record of 3min 8sec, breaking the old mark by just under a second.

He knew he had given his all.

"I was blimmin’ sore when I finished. Thought I was going to spew. I could not feel my legs after it. That was the first time I had a crack at something like that."

Weighing in at 70kg, he came in well under the required weight of 75kg.

He said with the Dunedin weather, rowing on the ergs was just part of being a rower in the South.

This summer has been particularly challenging because of the windy and wet weather. Some weeks he had not even got out on to the water.

Coached by Kirsty Dunhill, he will now get into winter training, and long term he has one more crack at the Maadi Cup in 2021, in year 13.