Another heartbreaker for Highlanders 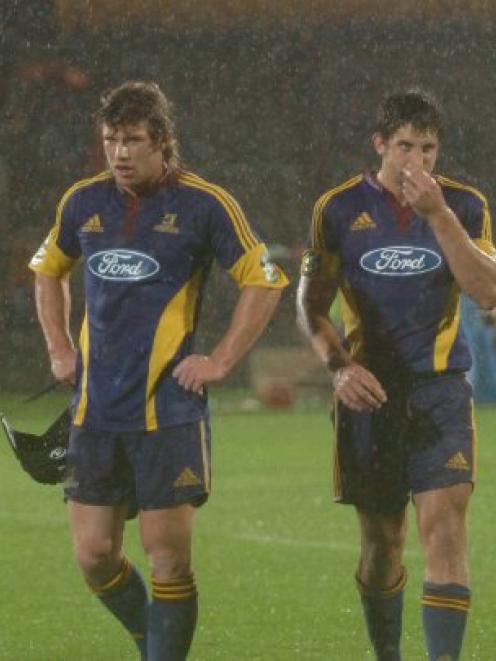 Tim Boys, left and Paul Williams after the loss to the Waratahs at Carisbrook on Saturday. Photo by Peter McIntosh

You can't fault the Highlanders for the commitment and effort they have showed in the first rounds of the Super 14.

You have to give them credit for at least getting a bonus point in each of their three games, two of which were played on the road.

You have to believe new coach Glenn Moore is doing his darnedest to whip his hugely inexperienced and unheralded side into a unit better than the sum of its parts, and that he has selected the best players at his disposal.

And you have to respect the 10,700 fans who hauled out their umbrellas, their ponchos, their gumboots and their makeshift hats fashioned out of cardboard beer trays and braved one of the wettest nights at Carisbrook in recent memory.

But sooner or later, the words ‘‘narrow'' and ‘‘loss'' are going to start to feel really, really hollow.

The consensus is the Highlanders are not far away, that with a bit of spit and polish - not to mention more experience and smarter decisions - they will be as competitive as most teams in the gruelling competition.

That's probably right. The Highlanders have been exciting to watch, showing far more sparkle in the backs and intent to play good rugby, have been mostly defensively sound, have kept a solid scrum despite the departure of an all-All Black front row, and have unleashed promising new players in Fetu'u Vainikolo, Steven Setephano and Daniel Bowden.
But what this latest loss, a three-point heart-sinker against the Waratahs, has further emphasised is that promise and fight are worthy attributes but are cold comfort if results are not put on the board.

The Highlanders were cursed by bad luck in their first two losses but on Saturday they were the architects of their own demise.

They rocketed to a 12-3 lead with two fine tries but then could not score in the last 51min of the game, and battled to get out of their own half in the second spell.

Kicking, both for goal and in general play, has been a weakness so far and the Highlanders again disappointed with the boot. James Wilson missed three of his four attempts at goal, including one long-range effort that would have tied the game in the final minutes, and butchered the prospect of an attacking line-out when he kicked out in goal.

Mike Delany, who was a mixed bag in his starting debut, made a terrible error to give the Waratahs the lead when he chipped a kick straight to Ben Jacobs. Delany tried to make amends by ankle-tapping Jacobs but the Waratah found Wycliff Palu for the try.

Palu then blotted his copybook by whacking Jimmy Cowan on the back of the head, earning himself 10 minutes in the bin.

It was the second yellow card of the game, with the Highlanders losing a forward to the bin in the first half for the third consecutive week. Lock Tom Donnelly was the villain, his experience failing to send a message to his brain when he lashed out with his boot at Brett Sheehan as the Waratahs halfback was preparing to pass.

Early in the game, the Highlanders were also marched for back-chat. Discipline has not been their strong suit this year, which is disappointing because it is one aspect of the game they can control.

Continuing another theme, the Highlanders were far more effective on the Waratahs' line-out throws than on their own. It remains a mystery why that part of the the game is proving such a struggle.

Both sides battled with the weather. It genuinely bucketed down, which was a crying shame for the franchise because it would have got a respectable crowd of 15,000 had the evening been fine.

There were some strong individual performances by the Highlanders, with flanker Adam Thomson the stand-out for his work around the field and in the line-out, and Alando Soakai and Jason Macdonald both industrious in the pack.

Johnny Leota had his best game in the midfield and Vainikolo was again potent as his reputation continues to build.

The Waratahs were marvellously led by their captain fantastic, Phil Waugh, who formed a bruising combination with Rocky Elsom, while Lote Tuqiri was always a threat.

It's a funny game, rugby. The Highlanders could genuinely have won all three games so far in the Super 14. They are far from some sort of crisis point, but the longer they have to wait for their first win, the more difficult it will be to avoid a lower-table finish.