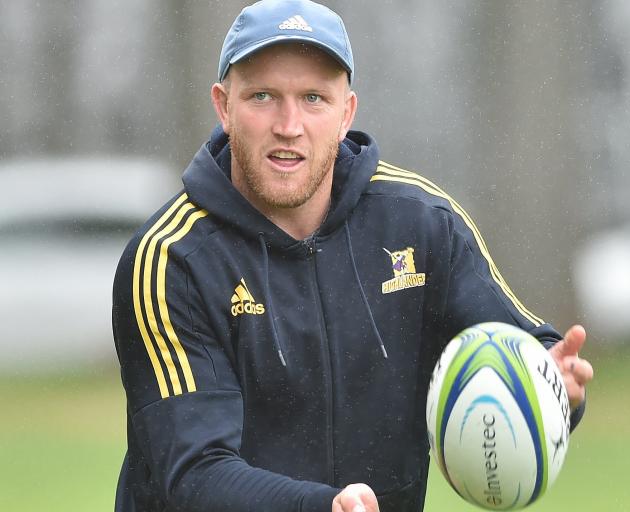 It was his fourth day back on the job and the veteran loose forward appeared to have re-acclimatised.

Well, at least there were not any signs of goose bumps.

The 30-year-old is very familiar with the city and its weather.

"This is exactly how I remember it," he said, looking skyward at the rain.

"But it is awesome to be back. We started on Thursday with fitness testing and things like that.

"The squad roster has changed a fair bit but there is still a good core nucleus of players.

"And from when I left, there is pretty much the same coaching staff.

"It is good to be back under Browny [coach Tony Brown] and Derms [assistant coach Clarke Dermody]."

The chance to play for Brown again, and to join his brother Bryn in the team, was a powerful incentive to transfer south again.

Gareth and Bryn have not played that much rugby together over the years as Bryn had a long playing stint overseas.

Gareth Evans first moved south to Dunedin in 2010 to attend the University of Otago and received his big break the following year.

He was rewarded for consistent form with a Highlanders contract in 2014. Evans played 44 games for the franchise during the next four seasons before heading north to play for the Hurricanes.

There were a couple of tremendous highlights during his first Highlanders stint.

He came on as a replacement during the 2015 Super Rugby final against the Hurricanes, and helped the Highlanders edged the British and Irish Lions 23-22 a couple of years later.

Evans went on the All Blacks’ northern tour to Japan and Europe in 2018 and made his international debut against Japan.

His enormous work rate and support play took him to the top of the game. But in recent seasons, he has been troubled by an ankle complaint.

This year shapes as a big season for Evans as he looks to recapture the form that got him selected in the All Blacks.

"To get things back on track, I thought it was a good time to come back down here.

"I don’t want to put too much pressure on myself. I’m looking forward to it and that is all I should probably say at the moment.

"I’m just looking forward to the opportunity, if it comes, and getting stuck in that way."

The Highlanders’ opening pre-season game is against the Crusaders in Weston, near Oamaru, on February 4.