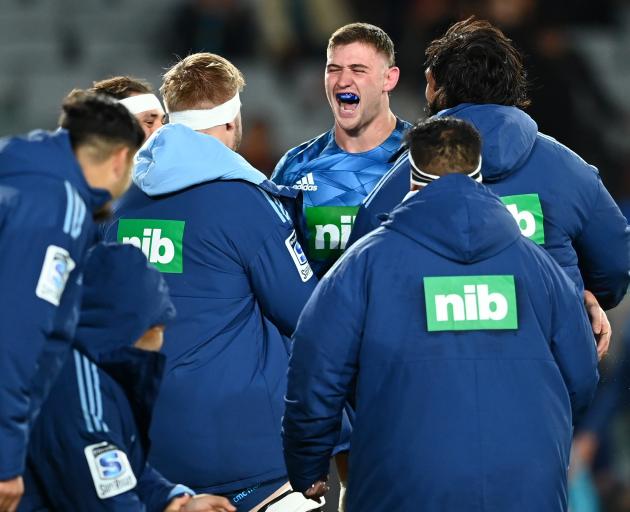 Dalton Papalii of the Blues celebrates after scoring a try against the Force in Auckland. Photo: Getty Images
For the first time since 2003, the Blues will contest a Super Rugby final, and after their strong transtasman campaign, they have earned the right to host it.

The Blues have ensured they finish the regular season at the top of the table, beating the Western Force 31-21 in Auckland on Saturday.

After the Highlanders and Crusaders both won earlier in the weekend, the equation was simple for the Blues. As long as they won, they would be hosting the final as, even without the bonus point that would separate them from their rivals, their points differential would be superior with a win.

It wasn't their best performance of the season, all but three of their points coming in the first half, but it was enough to get the job done.

"40 minutes is never good enough," Blues captain Patrick Tuipulotu said after the match. "You're always striving for the perfect 80, or 80 plus.

"It was a hard-fought game and you've got to be happy with the result that we get a home final, so we're looking forward to that.

"We'd love to have a full Eden Park for a final that we haven't had for a while. I know a lot of us are striving for success here, and this is a step in the right direction."

The Blues took some time to find their way in the match. Both sides needed a feeling out period, with neither able to control the possession for long periods in the early exchanges.

It took a barnstorming run from Hoskins Sotutu to bring life to the Blues, with the No 8 making a strong charge to find clear space, before sprinting away from the chasing defenders to score the game's opening try.

It was the only opportunity to Blues took inside the opening 25 minutes, and it seemed as though the Auckland faithful would be in for a rather nervous watch.

However, a 28th minute try to winger Mark Telea seemed to spark the Blues. They ran in two more tries before the end of the half through Sotutu and flanker Dalton Papalii to lead 28-0 at the break.

While it was an impressive period, it wasn't without issue as flanker Tom Robinson was forced from the field due to a head knock. He failed to pass his head injury assessment and was forced out for the rest of the match.

From the way the first half ended, it seemed the Blues were well poised to go on with the job. Instead, it was the Force who were firing on all cylinders in the second half.

The Blues did look to have another try through Telea late in the piece, but instead it was ruled out due to foul play in the build-up, and reserve hooker Ray Niuia was sent to the sin bin.

With the 10-point win, the Blues finish the season on equal points with the Highlanders and Crusaders, but end the campaign at the top of the table due to their superior points differential.