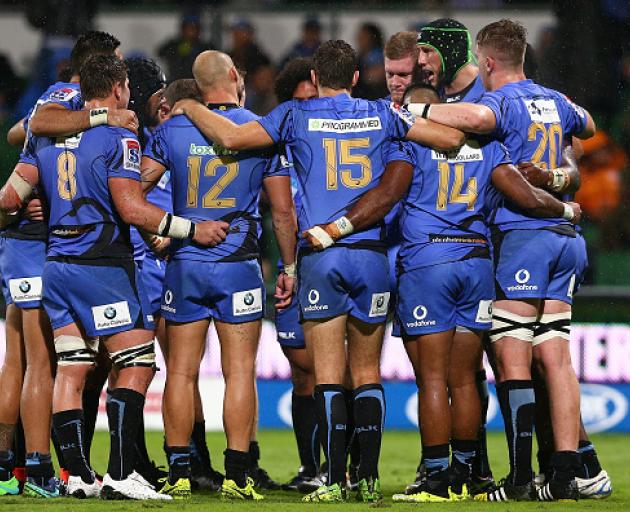 Force players in a huddle following their loss to the Highlanders at nib Stadium in Perth in 2017. Photo Getty

The Western Force will return to Super Rugby in 2020 for the "good of the sport" but billionaire owner Andrew Forrest wants to see a reinvention of the code before committing to any long-term investment.

Rugby Australia's (RA) proposed July restart firmed on Wednesday with the Force's return confirmed by Forrest, three years after they were cut from Super Rugby.

A five-team domestic competition from July 3 through to September 19 - to be known as Super Rugby AU - now looks likely, with the prospect of Japan's Sunwolves' involvement all but certain to be left on the cutting room floor.

The certainty of a minimum five-team competition has at least allowed RA to ramp up discussions with broadcaster Fox Sports and other commercial partners.

The Force may have to initially relocate to the east coast to contend with Western Australia's border closures, although Forrest is hopeful of hosting games in Perth later in the tournament.

Forrest's side were set to feature in the Asia-Pacific Global Rapid Rugby tournament before it too fell victim to the coronavirus pandemic.

The mining magnate said extraordinary circumstances led him to invest in the Force's one-off Super Rugby return, but made his broader opinions of Rugby Australia clear in a statement on Wednesday.

"My views on the mismanagement of the game under the previous Rugby Australia administration are well known and remain steadfast," he said.

"Change is imperative at the top for rugby to thrive long term.

"Rugby Australia cannot afford to miss this opportunity to restructure and reinvent every aspect of the game - its governance, cost structure, rules, competition construct, partnerships with broadcasters, commitment to grass roots and, most importantly, engagement with the fans."

He said Global Rapid Rugby had been created to show how the code could be played.

"Fun for the players, fast moving, high scoring and always entertaining," he said.

"The Australian sporting public deserves to see more of that style of rugby.

"Until I see evidence that reinvention is at the core of any strategic plan RA comes up with, it will be difficult to commit to a long-term investment."

"We are grateful for Andrew Forrest's support and understand that decisions made by Rugby Australia in 2017 were painful for sports fans in Western Australia and the Force players, and we are sorry that they haven't been able to share in the rivalry against their fellow Australian teams," he said.

"I would love to continue to work with Andrew into the future as we use this opportunity to innovate and reinvigorate Rugby right across the country."