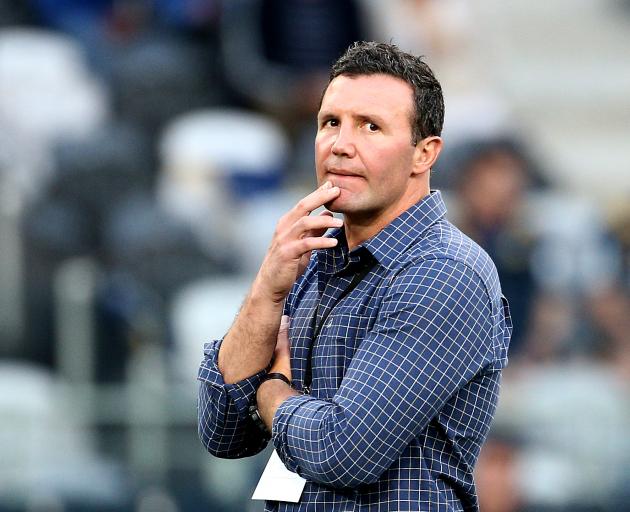 Highlanders coach Aaron Mauger looks on before the start of his side's Super Rugby match against the Reds in Dunedin on Friday night. PHOTO: GETTY IMAGES
The Highlanders are on the road for the next two weeks and will be hoping All Black loose forward Liam Squire can finally get on the park.

But his lingering hip injury has been nagging him for some time and may have to be managed throughout the season.

The Highlanders won their first home game of the season with a close run 36-31 victory over a gutsy Reds outfit at Forsyth Barr Stadium on Friday night.

The side now has two wins from two games and will be looking to make it a hat trick of victories when it faces the Rebels in Melbourne on Friday night.

The Rebels had the bye in
the just completed round so will have plenty of energy when
they play their opening home game of the season on Friday night.

The Highlanders will go to Melbourne, having made a good start to the season but will be on full alert for a Rebels onslaught.

The only injury issue the side picked up from the weekend was centre Rob Thompson, who left the field with an ankle injury in the first half, following an awkward fall in a tackle.

Thompson, though, was walking relatively freely after the game so the injury may not be too serious.

Highlanders coach Aaron Mauger said after win over the Reds the hip injury Squire had was not new.

"It's been ongoing for him. He's had it for the last year or so. We just want to make sure our players are all ready to go," he said.

"We have got strength in some positions and there is no point stressing our top players out when we don't need to, especially this early in the year, when it is such a long season."

Mauger said Squire was doubtful for the game against the Rebels but he hoped to get him involved in the next couple of weeks.

He said resting the injury was sometimes not ideal for Squire but the medical staff had a plan to get him back on the field.

The Highlanders will play the Hurricanes on March 8 in Wellington, before a game back at Forsyth Barr Stadium against the Crusaders on March 16.

The Highlanders and the Crusaders are the only two unbeaten New Zealand sides after the opening two rounds.

The Crusaders had a comfortable 38-22 win over the Hurricanes in Christchurch on Saturday night, although conceding three late tries cost the side a bonus point. The Hurricanes were way off the pace in the first half and trailed 31-0 early in the second half.

The Chiefs fell heavily to the Brumbies in Canberra, going down 54-17, in a disappointing effort from the Chiefs, in captain Brodie Retallick's 100th game at this level.

The Blues lost 26-7 to the Sharks and mirror the Chiefs, in having two losses from as many games.

The Stormers scored a try in the dying minutes to beat the Lions 19-17 in Cape Town.

In Buenos Aires, the Jaguares beat the Bulls 27-12.