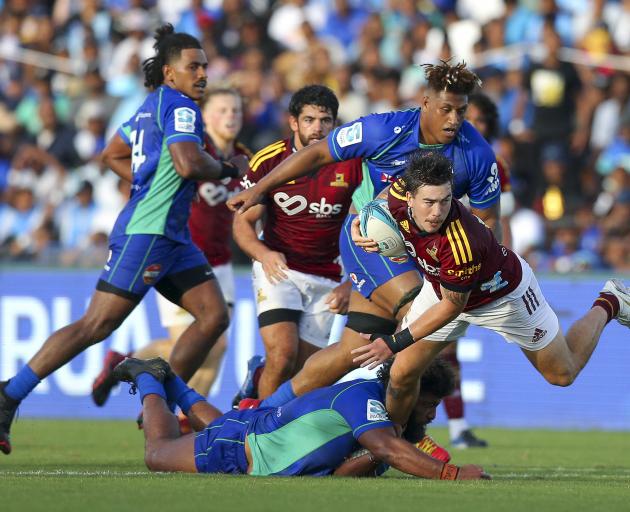 Connor Garden Bachop eludes a tackle in the Highlanders' narrow win over Fijian Drua in Suva. Photo: Getty Images
The Highlanders aren't the most complete team in Super Rugby Pacific, but they do have a very particular set of skills.

While struggling for results throughout the season, the Southerners have rarely been completely out of a game; they grind away and, in most cases, do enough to hang with their opponent.

On Saturday against the Fijian Drua in Suva, they did more than hang with their hosts, coming back from an 11-point deficit to claim a 27-24 win for just their second of the season.

Throughout the season, the Fijian Drua have shown how damaging they can be with ball in hand and, in front of a boisterous crowd in Suva, it wasn't long before they reminded everyone. In high temperatures and humidity, the Highlanders fell off a few tackles early, and the hosts took advantage.

Deep in their own territory with seemingly nothing on, the Drua spread the ball down the short side with a three-on-two advantage. It forced the Highlanders defence to make a decision, and freed up left wing Vinaya Habosi to stretch his legs down the touch line.

After a long run, he found halfback Frank Lomai on the inside, who scored the opening try of the match to thunderous applause.

However, it wasn't long before the Highlanders returned fire. After Fetuli Paea charged towards the posts and planted the ball at the base of the protective pad – which was once awarded as a try but not anymore – the Highlanders made the most of an attacking scrum five metres out, with right wing Sam Gilbert soon crossing in the corner.

It was a near mirror image of their first break that saw the Drua hit the lead again, as a short side play got Habosi in space with no one in front of him. This time, the winger got the points and the hosts led again.

He remained a threat throughout the first half, playing an important role in the build-up to their third try, with a run to get his side deep inside Highlanders territory, before a kick behind the line bounced favourably for midfielder Kalaveti Ravouvou to slam down.

With the match at risk of getting away from the Highlanders, they needed to be the next across the line. No 8 Marino Mikaele-Tu'u stepped up, bumping off a defender to stroll over from close range.

Trailing 21-17 at the break, the Highlanders kicked things up a notch in the second half. Their attack still fizzled out more often than not, but they were able to control the ball for large periods. The pressure ultimately accumulated in a try to reserve hooker Rhys Marshall – scoring the side's third close-range try to put the Highlanders ahead with just under 20 minutes to play.

It was enough to get the Highlanders the win, with neither side able to execute down the final stretch of the match.