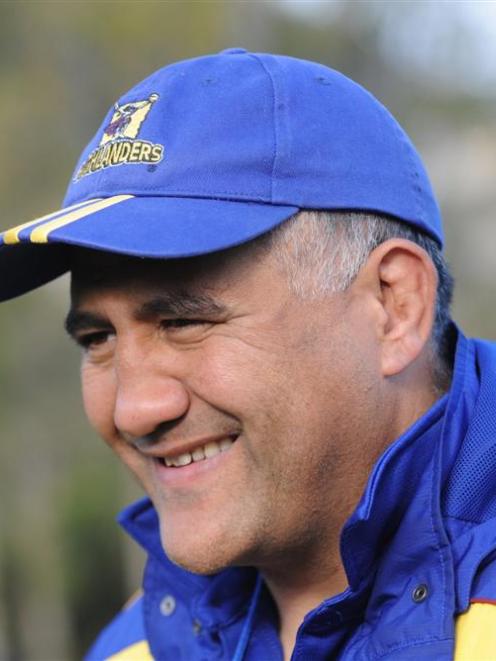 Jamie Joseph at Highlanders training this week. Photo by Peter McIntosh.
He is etched into the history of New Zealand rugby as one of the sport's "hard" men. An "enforcer". Now the boy from Blenheim - the "bruising" lock/loose forward from a golden era of Otago rugby - is moulding a team in his own image. Mark Price spoke to Highlanders coach Jamie Joseph about how the team of 2011 came to be.

It is the "commodity" he went shopping for when handed the Highlanders chequebook in the middle of last year.

Some he imported from up north in the form of players such as Jarrad Hoeata, Nasi Manu and Shaun Treeby. And some he found within the southern men he inherited with the job.

In an interview with the ODT before beating the Crusaders and prior to last night's match against the Blues, Joseph explained how he came to assemble a team so distinctively hard-nosed.

"One of the most important things for me was whoever we selected had to be of good mettle.

Joseph took on a Highlanders team in poor shape; second to last in 2010 - losing not only games, but fans, money, credibility and players.

"So we had to create a team and that's a bit of a different challenge from going out and finding some stars.

"It's one thing to have a chequebook and being able to go buy players but if there are no players available ..."

As coach of the Wellington Lions and New Zealand Maori, Joseph was familiar with the rising talent in those areas that the northern franchises had not picked up. Beyond that, he looked to his rugby network for advice.

"Obviously, coaching teams at various stages throughout the last 10 years you get to know a lot of coaches.

"I asked a lot of questions."

So, while Highlanders fans were recovering from last winter's rout, Joseph was on the road and in the air, interviewing prospective players in Koru lounges around the country - "poaching" development players and just trying to "suss a few things out".

Joseph played 68 games for Otago in the six years he spent in Dunedin from 1989 but at the same time he was completing a University of Otago physical education degree majoring in psychology.

It was knowledge he brought to bear in his hunt for players with mettle.

"That's my job. That's supposedly what I'm supposed to be good at, is to be able to identify good rugby players.

"I think anyone can watch a game of rugby and spot talent but there's a lot behind the scenes as well that I take particular interest in - just how they train and just sort of how they are as people."

Joseph says he wanted players who were "relentless" and had a strong work ethic.

"Those are the sorts of things I'm looking for by asking questions to people that know them, coached them, taught them, whatever, whoever."

At the same time as he was signing up new players, he was also dealing with dispirited Highlanders players, several looking at their options elsewhere.

"So I had to persuade some."

The most high-profile of those were Adam Thomson and captain Jamie Mackintosh.

"I'm not a car salesman; I didn't really sell them.

"I just sort of told them what I'm about and what I was going to do and how that would improve the team and the environment, which then would lead to an improvement in our performance.

"And they could be part of that if they wanted to."

Joseph said Mackintosh was "very confident" he wanted to be part of it but "Thommo took a bit more persuading".

"In the end I gave him the choice, mate, or he would have to move on as well."

In the end of course, Thomson, who could have gone to the Crusaders, decided to stay.

"We're very fortunate to have players like Thommo that were willing to, I guess, take a risk and stay in the Highlanders.

"I can't comment on how he was feeling in the years before but it wasn't good.

Joseph said he could not promise Thomson the Highlanders would be successful on the scoreboard but he "could promise him a few things that he could get his teeth into and he's obviously relishing that".

Joseph says it was a "a bit of a shame" he did not get a chance to talk to Israel Dagg, before he decided to leave for the Crusaders.

He also had to move a couple of players on "which was also very difficult".

One thing he found "a wee bit weird" was why the strong Southland contingent in the Highlanders did not perform in 2010.

"How could these players play like this for Southland but wouldn't front for the team that delivers them all the prestige, opportunity to the All Blacks or to overseas markets and more money?

"I couldn't understand that but obviously that was to do more with their mental wellbeing than their abilities."

He decided part of the way to tap into this "untapped potential" was to bring Southland co-coach and former All Black Simon Culhane ["Nibs"] into the Highlanders management team as assistant coach.

"Everyone sort of underestimates how important a good management team is and I guess what I did first was look at what I had to offer a team and what I don't have to offer.

"I tried to fill those holes in with the coaches I've selected."

He recognised Culhane had an "an obvious rapport" with the Southland players and was also a "good bugger from down here".

Joseph says he took on Kieran Keane as assistant coach for his experience, for his technical background and because he was "very hungry because he had been overlooked in various jobs".

Having gathered up his raw mettle, Joseph set about forging a side that could compete - turning the narrow losses of the previous season into wins.

He started by having a "few yarns" with the management team to devise a plan.

"We're a team that's limited in some places but not limited in others and I guess if you put us one-on-one on paper with all the other Super rugby teams, particularly the ones in New Zealand, you would say that we wouldn't have as much talent as the other teams.

"But what we do have is a commodity of teamliness and sticking together and work ethic and all these sorts of things which I've sort of defined as mettle.

"And when we click ... we can play and beat anybody.

"So we started off prudently with the way we wanted to play.

"We've been building a foundation of using our point of difference which is, as I say, the mettle that I talk about.

"And then as we've got more confidence, we've played a bit wider and hence we're starting to play some attractive footie.

"And I think that's just the natural development of a successful team."

Crosswell, one of the new boys, he included because he did not want "just an old boys network" from the previous year.

"What I said to those guys was that this will only work if they are right in, 24-seven, for the whole season.

"And thus far they have been. And if they start slipping I let them know.

"And thankfully they are always on board and that's what led to winning tight games."

Joseph says there was no point having a plan only he believed in.

"It's got to be a plan that the whole team does and thankfully those guys who have led understand that and agree.

"And, if they don't, we discuss that and we debate all that and at the end of the day that's my job - to coach these guys and give them belief in the plan that we have."

But, perhaps the most important tactical decision of the entire 2011 Highlanders' season was made back in July last year and was not made by Joseph at all.

It was the New Zealand Rugby Union's decision to offer Joseph the Highlanders' job.

Joseph had applied for the Hurricanes job and felt he had a good chance of getting it.

"I had been the Wellington coach for three years ... and had reasonable success with the Lions side so I certainly had the personal confidence to be able to step up and coach at this level."

Staying in Wellington would also have "made sense" for his family. His wife Mandy is from there and their four children were growing up there.

"So it just made a lot of sense to have a crack at that job and I was disappointed that I missed out."

Asked why he missed out, Joseph says the rugby union "just had a preferred candidate" in Mark Hammett.

"It's like anything that you apply for. You can only do what you do and only give what you give and I obviously wasn't what they were looking for, mate."

Joseph feels disappointed now for the Hurricanes players who had not performed as well as they might have liked.

"It just shows you how important you have to be in terms of playing as a team and playing together and playing for the right reasons, even though it might be professional.

"What I find is that if you can get the guys to play intrinsically [rather than] for professional remuneration, then they tend to play a lot better and they tend to enjoy their football a lot more."

The Hurricanes will test the Highlanders' mettle again on Friday, May 13.

But that match is too far in the future to be on Joseph's radar yet.

When we talked he had last night's game to analyse, a plan to set for next weekend and just a few days to "get the guys all in line and singing the same tune".