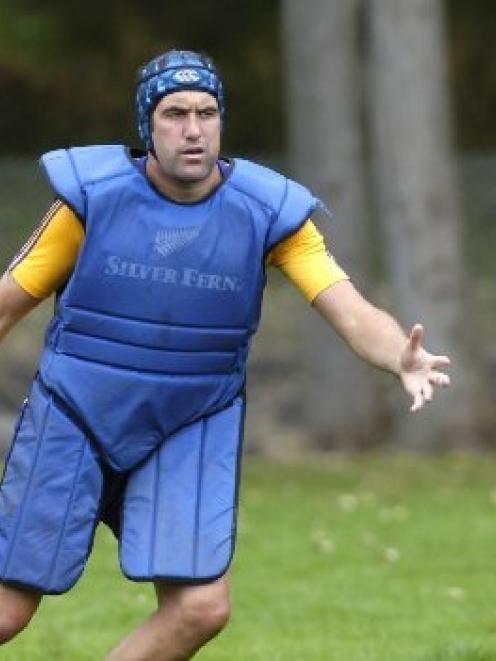 Highlanders lock Hoani MacDonald pads up as he takes part in a training drill at Logan Park. Photo by Peter McIntosh
It has been a tough season but the Highlanders, hoping to avoid a sixth consecutive defeat against the Chiefs tonight, have not lacked success stories.

The front row, entirely rebuilt following the departure of three All Blacks, has more than held its own. Steven Setephano has blossomed as a top-class No 8. And winger Fetu'u Vainikolo is the early candidate for Super 14 rookie of the year.

Then there is Hoani MacDonald.

He's 29, so he's no rookie. His name has never been mentioned in those stories previewing the naming of All Black teams. In many ways, he's as unfashionable as they come.

But in just two games, MacDonald has revealed all of his abilities as a lock and senior player. It is fair to say if others in the team had played with his drive and skill, the Highlanders might not be looking up at 13 other teams in the table.

Losing sits on the born-and-raised Southlander about as comfortably as a latte would feel in his hand. As a senior player - only prop Keith Cameron is older - he knows the recipe for success is actually quite simple.

"It's a real funny situation that we're in,'' MacDonald said. "We're not playing badly. We're playing real well in patches and then we have a lapse of 10-15min, and that's what is costing us.

"You can't really offer any advice other than to say we have to play 80min. We are the kind of team that has to play 80min. Teams like the Blues or the Hurricanes might be able to afford the odd lapse, but I don't think we can.''

MacDonald has been one of those unlucky players to have spent almost as much time in the physio's office as on the field in recent years, limiting him to 44 games for Southland over eight years and 25 games for the Highlanders.

He had major ankle problems, then played through the last Air New Zealand Cup with a ruptured pectoral muscle.

Just when he thought he would ease his 1.98m, 111kg frame into a Super 14 season feeling fit and healthy, he was sidelined by a broken finger and missed the first three games of the competition.

Injuries have curtailed some of MacDonald's progress but it is also reasonable to suggest he has been living in the shadows, at least at the Highlanders, of fellow locks James Ryan and Tom Donnelly.

In 2005, he made one start and that was on the side of the scrum. In 2006, all seven of his starts were on the flank. Even last year, he wore the No 6 jersey three times and possibly got as many as six starts at lock only because both Donnelly and Ryan had injuries.

"I've ended up playing on the blindside a lot, I suppose. But I wouldn't say I've been in the shadow of those guys,'' MacDonald said.

"It's just different, being a player coming from Southland. You sometimes have to adjust how you do things when you join the Highlanders.

"Things are changing. Southland are doing a great job and have got some good young players coming through. Years ago, you'd see players make the Southland Colts and then bolt for Otago. Now they're staying in Southland and really aspiring to play for the Stags.''

MacDonald is not your typical professional player who has known nothing but rugby. When he went to the University of Otago, completing a degree in marketing, rugby was the last thing on his mind.

He was quietly tootling through a club season in 2003, aged 24, when he was told by then Southland coach Phil Young to apply himself a bit harder because he might have a future in the game.

"Phil really gave me a shot. He said if I trained hard I would get picked. I guess it's all happened from there.

"I started quite late, so I definitely feel pretty young and keen. As long as you're still enjoying rugby, you can go on and play it for as long as you want.''

MacDonald played for New Zealand Maori in 2004 and has played for the Junior All Blacks the last two years. He is off contract with New Zealand rugby at the end of this year, and with plenty of options overseas, he has a big decision to make.

The only decision the Highlanders have to make tonight is whether they are satisfied to consign this season to the rubbish bin. Hopefully, the answer is a firm no.

They must keep backing themselves to be competitive, but they also need to play a lot smarter. The Chiefs, packed with power runners and line-breaking backs, will relish any loose ball and mis-directed kicks.

Hamilton hasn't been a favoured destination of southern teams for years now, and the Chiefs have won the last four games they have played against the Highlanders.

But there is always hope. The Chiefs have been lucky to win a couple of games and, partly because of injuries, have not played with much consistency. If the home side does not play well, the Highlanders are a chance.