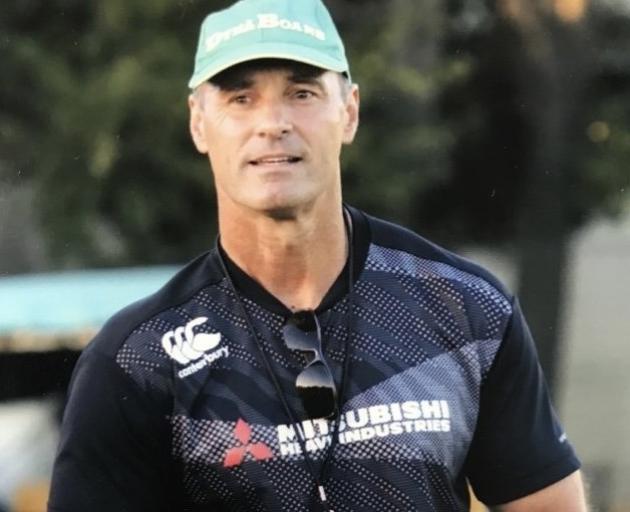 Former Highlanders coach Greg Cooper is enjoying life in Japan. PHOTO: SUPPLIED
Japanese rugby embarks on a new era when League One, formerly the Top League, begins this weekend. In the middle of it all will be Otago rugby great and former Highlanders coach Greg Cooper, who guides the fortunes of the Mitsubishi Dynaboars. He speaks to sports editor Hayden Meikle on the eve of what could be a significant moment for world rugby.

BEST friends — not a threat.

That is how Greg Cooper believes New Zealand rugby bigwigs should be regarding their Japanese counterparts as a bold new competition begins in the Asian nation.

The old 16-team Top League morphs into a 24-team, three-division Japan Rugby League One this weekend.

It is not a hastily rejigged concept. It has been some time in the making, and Japanese rugby bosses are openly talking about their aim of making it the sport’s premier domestic competition.

In the words of league boss and businessman Genichi Tamatsuka: "A totally different world is coming".

It is a world with vast resources, no real salary constraints, a public appetite for rugby that has exploded following the hosting of the 2019 World Cup, and a trickle of world-class players that could turn into a flood.

Small wonder some down this end of the world are nervous that even more top New Zealand players will choose to chase the yen.

But that would be a short-sighted approach, according to Cooper, who coaches the Mitsubishi Dynaboars in the new second division. 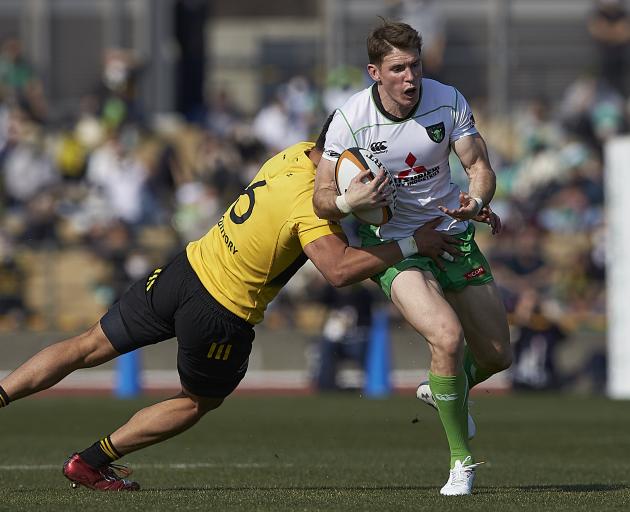 Colin Slade’s long professional career shows no sign of ending. PHOTO: GETTY IMAGES
"I’ve been saying for a while now that, if I was New Zealand rugby, the first national union I would be wanting to talk to would be Japan," he told the Otago Daily Times.

"They should be starting to think about how to work the Japanese rugby season in with the Super Rugby season.

"The top New Zealand rugby players can come over here and go back to New Zealand. We’ve seen players do that. That’s the way of the world now, and the way it has to be.

"To me, Japan should be our greatest friends in terms of rugby, and we should be doing everything possible to link in here.

"It’s not about seeing Japan as a threat. It’s about finding ways to work with them."

There are reports the Japanese union is well advanced with discussions with Super Rugby over introducing some sort of cross-border competition in the future.

Cooper said that was a no-brainer, not just because of the relatively friendly time zone but because it was a chance for New Zealand to tap into the rise of rugby in Japan.

"There is phenomenal interest in rugby in Japan. And it’s only going to get bigger. 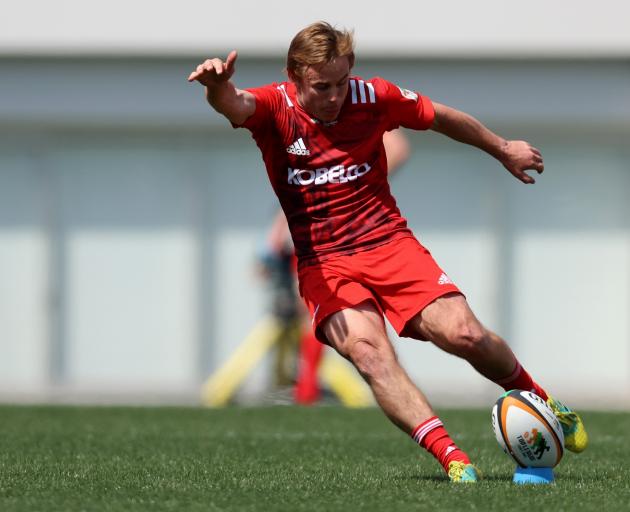 Cooper likes the move to condense the top division from 16 teams to 12, and to have clear promotion-relegation rules between the three divisions.

Covid had stalled momentum created by hosting the World Cup — and the opening game of League One has already been cancelled due to the resurgence of the virus — but the legacy of that tournament was set to be realised.

"I think this is seen as the momentum builder again. I think it’s a massive moment for Japanese rugby.

"They are clearly ambitious. They’ve made the top eight at a World Cup. And the Japanese mentality is very much: OK, where do we go next?

"In the old days, they might have been satisfied with a quarterfinal. Not now. They want to make more history. One day, I think they genuinely want to win the Rugby World Cup."

Cooper’s Mitsubishi Dynaboars, who had earned promotion in 2020, only got to play six games last year before the league was cancelled due to Covid. 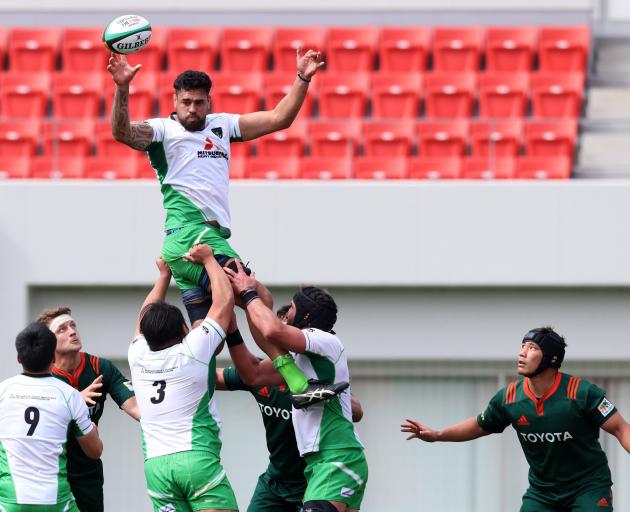 Former Highlanders lock Jackson Hemopo is a key man for the Mitsubishi Dynaboars. PHOTO: GETTY IMAGES
He said the standard of rugby in Japan had improved, powered in part by the smart recruitment of good players from New Zealand.

"We look at players all round the world. Some of them haven’t got right to the top in New Zealand, but they have the character to come to Japan and succeed.

"Think of someone like Glen Marsh. Glen was a very good player, but not an All Black. His name is huge over here. He came to Japan and was one hell of a competitor who never took a backwards step, and the Japanese loved him.

"The big thing now is if a foreign player comes to a Japanese team, he is expected to do a job. He can’t come here just because he’s seen as a name."

Japanese rugby has also enlisted plenty of foreign coaches, and Cooper is now something of a senior figure on the scene.

After all his years with the Highlanders, Otago, the Blues and clubs in France and Japan, Cooper is a coach at peace with the responsibilities on his shoulders but still someone who hungers to learn.

He has had to deal with long periods away from his family, and the challenges of learning languages and adapting new cultures, not to mention having to constantly refresh his coaching methods to deal with a new generation of young men.

"As a coach, I probably got a bit defensive in my early days, if there was something I thought was negative.

"I’m not like that now. I’m more about thinking things through and trying to come up with a constructive response. 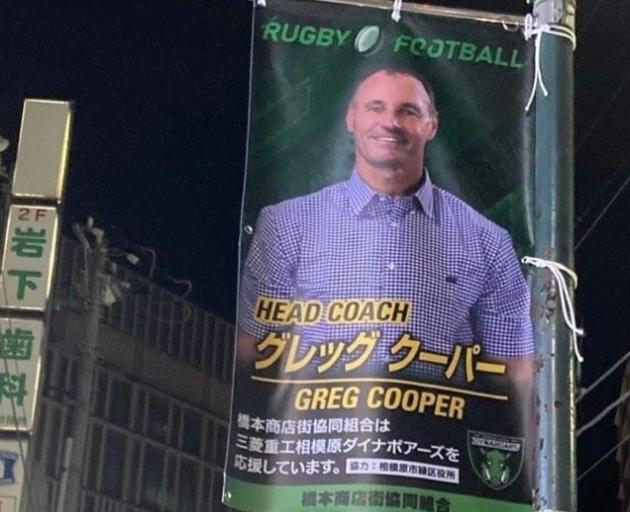 Cooper’s banner at a local shopping precinct has his image on one side and the team’s pig mascot on the other. PHOTO: SUPPLIED
"My biggest thing now is I’ve realised that if someone speaks their mind, they’re doing it for a reason, and I need to think about why they’re saying it.

"I don’t react, like I used to. I contemplate before reacting.

"The game’s changing, and as a coach, you have to be learning all the time. The people you coach are changing."

Cooper has not made any specific plans to return to New Zealand or dip his toe back into coaching at home.

He loves what he does — especially the role with the Dynaboars, which is almost more a director of rugby than a coach — and relishes opportunities to help other coaches.

"I don’t have specific thoughts about aspiring to coach anywhere else at this point in time.

"But I do love the idea of coaching in a place like the United States, eventually — somewhere really different in terms of a fledgling rugby scene."

Cooper’s Dynaboars, based in the city of Sagamihara, in the Kanagawa Prefecture, open their campaign with a game against the Hanazono Kintetsu Liners on Monday.

The Liners possess a decent inside-back combination in the form of former Wallabies Will Genia and Quade Cooper.