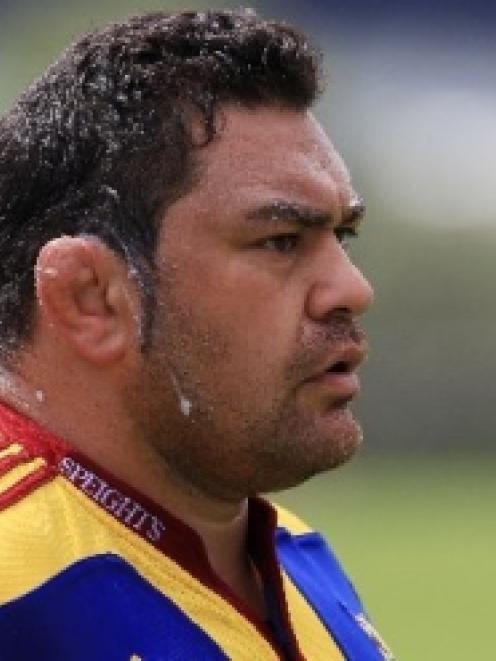 Highlanders assistant coach Kees Meeuws, who had to sit on the bench and got a few minutes in the final pre-season game against the Blues in Auckland last Friday.
The Highlanders will go into their first game of the season with nearly a third of their side unavailable and the side's two Japanese-based players unlikely to fill the gaps.

The side will take on the Chiefs in the opening Super 15 match this Saturday in Hamilton and coach Jamie Joseph will field a XV but it will be far from his first-choice side.

The side is struggling to find a tighthead prop with both Chris King and Ma'afu Fia under injury clouds.

King has a groin complaint while Fia has been worried by a hamstring strain.

The propping situation got so serious that assistant coach and former All Black Kees Meeuws was forced to sit on the bench and got a few minutes in the final pre-season game against the Blues in Auckland last Friday.

The midfield remains lacking in numbers and it looks as though Ben Smith will be forced to play centre with new recruit Phil Burleigh inside him.

Joseph said second five-eighth Shaun Treeby did go for a run over the weekend and reported no pain in his knee, which was operated on last year.

But Joseph said Treeby was obviously still some way short of being available for selection.

There had been hope that the two players playing in Japan, midfielder Tamati Ellison and loose forward James Haskell would arrive in Dunedin this week to boost playing numbers.

The side the duo had been playing for in Japan, the Ricoh Black Rams, had been knocked out of the Japanese league playoffs over the weekend, losing to Kobe Steel 32-19.

But Joseph said the players still had contractual obligations to fulfil with the Japanese club and were not likely to be heading south until tomorrow [Wednesday] at the earliest.

"It is probably not likely they will get here in time which is disappointing for them and us.

But it takes a couple of days to get here and that is too close to the game," he said.

"We'll still be able to field a XV but it is disappointing there is a cloud over so many players.

"We've got a pretty good bunch of guys who are working hard but we really do need the support of the other players. It's not ideal obviously. We would have liked to have 30 available to pick from.

But you can only control what you can control."

One positive was prop and captain Jamie Mackintosh and lock Josh Bekhuis had got through most of the game after coming back from serious injury.

They would be in the frame for this Saturday's game.

The side lost to the Blues on Friday 29-12 and Joseph said the side had no ball in the first half and it was a credit to the team to only be down 15-7 at the break.

The referees had been instructed to look hard at the position of the tackler in the breakdown and coming in from the correct side for this season.

Jonathon White will referee the match on Saturday.