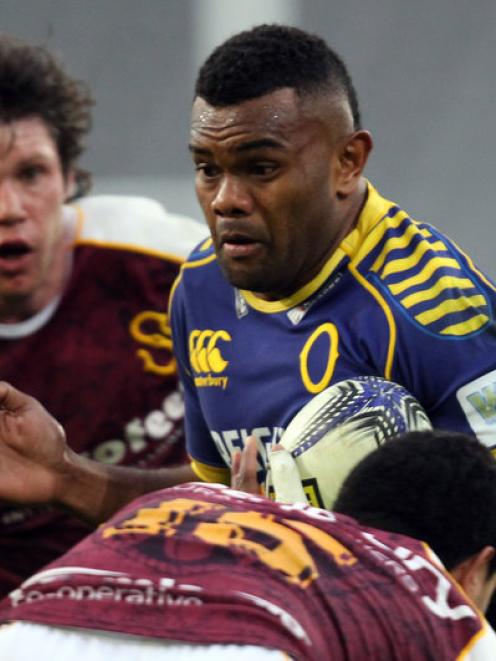 Michael Collins 8/10: Lively on the counter, took great options and found gaps with ease. Hardly put a foot wrong in arguably his best performance for Otago.

Sio Tomkinson 6/10: Played in an unfamiliar position and didn't do anything wrong, although did not see a lot of ball either. Took good options and looked to keep the ball alive.

Matt Faddes 8/10: One of Otago's best once again. Was threatening with ball in hand, excelling with his speed and strength to make a handful of breaks and attract the attention of the defence.

Tei Walden 6.5/10: Pretty solid, took good options and finished off a good try. Made quite a few tackles in the midfield.

Jack Wilson 7.5/10: Chased well, was strong defensively and had some great touches on attack which helped put Otago into try scoring positions.

Peter Breen 7.5/10: Kicked well once again. Also took the ball to the line on attack and brought a measured approach while also providing spark.

Josh Renton 7/10: Provided good service, supported well after the ball went wide and put in a couple of good kicks, including the one which put Otago into position to score the first try.

Naulia Dawai 7.5/10: Recovered well after dropping an early kick. Ran strongly in the open and was prominent on defence, hitting hard and making plenty of tackles.

James Lentjes 7.5/10: Outstanding in his first game back from injury. Made some good tackles, but was most noticeable in his breakdown work, where he was instrumental in turning ball over.

Adam Knight 7/10: Got his hands on the ball in the open and carried it well, while getting involved around the field.

Tom Franklin 8/10: Very good in the lineout, was noticeable in his work around the field and threw a nice inside ball to put Jayden Spence into a gap, which he took and scored off.

Blair Tweed 7/10: Got around the field well, made his tackles and hit rucks.

Hisa Sasagi 7/10: Another who worked hard, getting to rucks, making tackles and looking to carry the ball.

Liam Coltman 8/10: His throwing was a bit off at times, but was huge around the field. Added physicality, made his tackles and scored an outstanding try in which he stepped a player then carried a tackler over the line.

Craig Millar 7/10: Got around the field well, provided support at the ruck and made a handful of tackles.

Sekonaia Pole 6/10: Came on in the second half and was active, getting around the field well and doing his job.

Aki Seiuli 7/10: Made an impact, was aggressive in contact and threw a good offload.

Donald Brighouse 6/10: Played the last 20 minutes. Was fairly solid but not spectacular.

Jackson Hemopo 6.5/10: Made one good run down the right side of the field, did well in his first game back.

Mika Mafi 7.5/10: Carried the ball strongly to provide go-forward, including the phase before Renton's try. Got around the field well and went looking for the ball.

Kaide Whiting 6/10: Closed the game out well after coming on late, putting a few kicks in behind and making one good run.

Fletcher Smith 7.5/10: Added spark to the backline, took the ball to the line, ran at gaps, put players into space and made a couple of breaks, including one to set up Renton's try. Found space kicking in behind the Southland line too.

Jayden Spence 7.5/10: Had his best game of the season, was dangerous with ball in hand and came off his wing to score a good try.