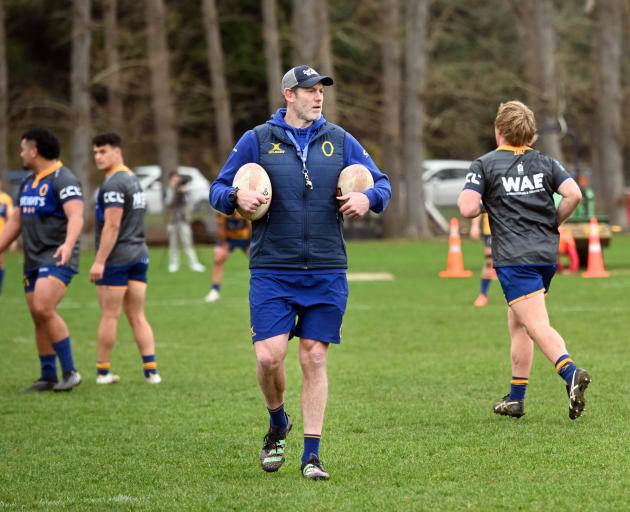 Otago rugby coach Tom Donnelly at team training at Logan Park on Thursday. PHOTO: LINDA ROBERTSON
Otago gets its NPC campaign under way against Counties-Manukau this afternoon and there is reason to feel optimistic about the team’s prospects this season, writes reporter Adrian Seconi.

You do not win the NPC with a cracking 40-minute effort against Canterbury in the pre-season.

You certainly do not win it with the second-half effort either.

But that first half offered a glimpse of glory.

If Otago can find that sort of form consistently then that NPC final on October 22 could be within reach.

Plenty of rucks to hit first of course, but coach Tom Donnelly sees a lot of positives.

"I was really happy with the pre-season," he said.

"We did a couple of nice things in the games, but there are some pretty big areas for us to work on which we’ve worked pretty hard on this week.

"I think we’re in a really good space for this first game."

The season opener is against Counties-Manukau in Pukekohe this afternoon.

Josh Timu shone at centre during the pre-season. He stood out for his work rate mostly, but his pace and agility is a real asset.

His midfield partner Thomas Umaga-Jensen is a very different type of player. He takes a more direct route and is hard to stop. He got himself involved close to the ruck and created havoc for the Canterbury defence.

Umaga-Jensen has had a tough run of injuries in the past few years, but he is fresh from a strong season with the Highlanders where he was arguably their best back.

The pair will have just that extra bit of time to work their magic thanks to the combination inside them.

Chiefs first five Josh Ioane was probably Otago’s best player last year. He has a quality passing game. His tactical kicking gets a prize from the top shelf and you cannot give him space lest he slip through a gap.

He will combine with former Wellington halfback Kemara Hauiti-Parapara, who has a solid distribution game.

He has not shown much of a running game since the move south recently. But his role will be to shovel the ball wide and he has done a very decent job of that so far.

Winger Jona Nareki has been sidelined with an ACL injury for the best part of a year. But he showed signs he can rediscover the sparkling form he was in prior to his injury.

He is one of the players Otago will look to create something when everything else has not worked.

The three front-rowers on the bench look just as good as the three in the starting line-up.

If there is a question mark about this Otago side it is around the loose forward trio. The captain James Lentjes will slot into No 8 until Christian Lio-Willie returns from an ankle complaint.

He could be out for up to a month and it leaves Otago without a big ball carrier in that spot.

The arrival of Oliver Haig has helped answer a few questions. The rangy New Zealand under-20 blindside offers Otago a third lineout option and he covers a lot of ground in a game.

There are 23 players in the Otago wider squad with Super Rugby involvement.

That is a lot of depth, but Otago is not the only team bursting with talent, Donnelly pointed out.

But he is very happy with his side.