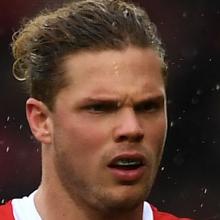 Henry Purdy
Otago and Southland are not alone in bringing in overseas talent to plug gaps as most sides look to bolster line-ups in the provincial competition.

Otago lined up winger Henry Purdy in its team against Bay of Plenty on Sunday and also had South Africans Louis Conradie and Rowan Gouws on the reserve bench.

Purdy played more than 80 times for Gloucester in the English Premiership and also played for England under-20. He arrived in New Zealand last week having been released from Gloucester at the end of the season.

Otago needed some outside-back cover after being hit by injuries.

It had lost winger Mitchell Scott for the season with a pectoral injury and Michael Collins was still coming back from a groin strain. Josh Timu was also out with an ankle injury and Matt Whaanga had a knee niggle which ruled him out for last weekend.

Otago Rugby Football Union general manager Richard Kinley said Purdy was experienced and, with all the injuries, he was needed in the side.

But it was not a sign of Otago bringing in overseas players ahead of locals, he said.

Otago would always go for local players who played in the club competitions in the provinces but it did not want to expose players before they were ready for first-class rugby.

"Otago Rugby has a philosophy of selecting local players for our Mitre 10 Cup team. This approach also supports our player-development model which is considered as one of the leading programmes in New Zealand,'' he said.

"However, it is important to maintain a balance and the union will identify and source players from outside the region for the Mitre 10 Cup when it is deemed potentially detrimental to a local player's development to bring them into that level of rugby too early in their playing career.''

"For example, it would be unwise to introduce a young front rower into the team when the side was due to play a heavyweight such as Canterbury or Auckland. A tough experience would hurt the player and his prospects.

'We are absolutely committed to developing local players.''

Southland has brought in players from the Brumbies to help bolster its backline. Wellington has named former Italian lock Josh Furno, who played for Otago two years ago, in its squad, while young Australian fullback Andrew Kellaway plays for Counties-Manukau. Other sides have overseas players.

Regulations say overseas players must be playing in the club competition of the host union by July 12 if they want to qualify as local players.

There is no limit on how many loan or overseas players unions can have but no more than six players can be named in a match-day squad of 23. A loan player is one who comes from another union within New Zealand.