Rugby: Game 'nothing but good times' for Pilcher 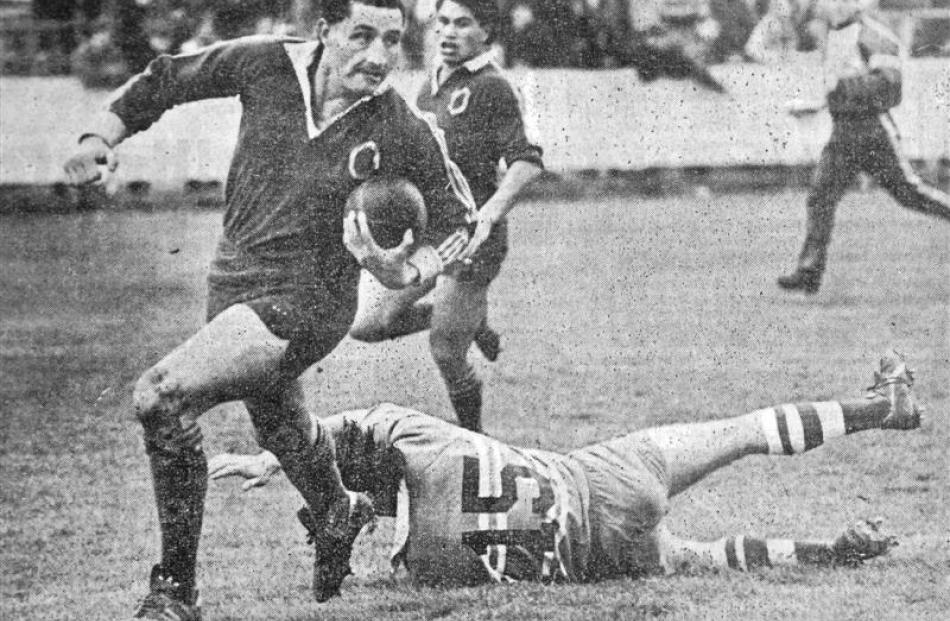 Noel Pilcher scores a try against Manawatu in 1988 at Carisbrook with Manawatu fullback Matene Love sprawled on the ground. John Timu is in behind. Otago won the game 55-6. Photo by ODT.

In some ways, Noel Pilcher was before his time. The former Otago winger was big and strong and played on the wing in the times when most wingers were small and taller players were moved into the forwards. Steve Hepburn catches up with Pilcher, who these days is a long way from Carisbrook.

There was something a bit old school about Noel Pilcher.

He was a bit of an accidental rugby player.

There were no academies and gym programmes for Pilcher.

In fact, if you said Pilcher stumbled into rugby, you would be dead right.

Well, not perhaps stumble, but more of a gentle stroll.

Pilcher, who played 60 games for Otago, mainly on the left wing from 1982 until 1989, was more of a basketballer when he grew up, playing for Otago at one stage.

''I played basketball right up until 1981. When I went to school [Kaikorai Valley High School], basketball was my game. I'd played rugby to start with but changed to that,'' he said.

''But then one day I was walking past Bathgate Park and I started watching a trial they were having. I thought I might have a go at that.

''I had played rugby when I was a little kid but hadn't played for years. It was certainly a lot different than basketball.''

Pilcher, who was about 1.9m tall and weighed nearer 100kg than 90kg, should have perhaps played in the forwards. In those days, if you were big, you played with a single digit on your back.

Pilcher did have some speed and was good at keeping the ball alive, with his large frame able to move the ball on.

He played initially for Southern, coached by future Otago and All Black coach Laurie Mains.

''Laurie taught me a lot. He was a hard trainer and you certainly knew you had been in a training run.''

Pilcher was a quick learner and, within a year, was picked for Otago and made his debut at centre, against Southland, in the first game in 1982. Inside him, also making his first-class debut, was future All Black captain, halfback David Kirk.

The side beat Southland in that opening game but it was not much of a season for Otago and only through a magical performance by fullback David Halligan against Bay of Plenty did the side escape relegation.

The tides were changing in Otago rugby and Mains was named Otago coach in 1983.

Pilcher was to remain in the Otago team for the next seven seasons as Mains and other players started to rebuild the Otago side and get the team winning more regularly.

Pilcher was part of those plans and, slowly but surely, the Otago team started improving.

He said, looking back, it was nothing but good times.

''It was a lot of fun. You were playing with guys who played with a lot of heart and really wanted to play with each other.

''We were just talking at work the other day about rugby and to me, thinking back, it was just good times. Sure, trainings were hard and Laurie certainly made you work hard, but you were with all your mates, all in it together. That was what it was like back in the amateur days.''

From the depths of flirting with relegation in 1982, Otago slowly worked its way back up into contention.

Pilcher was part of the side but was often hit by injury. His 1984 season ended after three games and he played sporadically the following year.

His knees were playing up and other wingers were preferred.

But by 1987, Pilcher, by then playing for Taieri, became more of a regular and was described by the Rugby Almanack as ''Otago's outstanding back''.

Otago finished third in the first division of the national provincial competition that year.

The next year it was again competitive and journeyed to Eden Park with an outside chance of grabbing the Ranfurly Shield. And it put up a heck of a challenge.

Pilcher scored a try from an intercept early in the second half and Otago was up 17-12. Then a few minutes later, Pilcher worked a move off Arthur Stone and was on his way to the tryline.

It looked as though he would score but he was lowered by Frank Bunce and it was ruled no try, which Pilcher maintains was the correct decision.

''It was definitely not a try. A few people back in Otago thought it was a try but he got hold of me before the line. I wish it was but I was a metre or so away. I've lived it in my dreams since that I have scored the try but it wasn't.''

But 1988 was a year to remember for Pilcher. John Timu broke the Otago try-scoring record with 16 tries and Pilcher, on the left wing, was only one behind.

He was rewarded with selection in the Southern zone team and played a couple of games in the short-lived zonal concept.

But by now his knees were really starting to hurt.

He came back in 1989 for five games but the writing was on the wall about his joints.

''My knees were just shot. I went to the doctor and he said, get another knock on your knee and it could be wheelchair time. So I had to stop. I was slowing down anyway.

''But I missed it heaps. I used to go down to training and watch them train for the rest of the year. I did not realise how much of an impact it would have on me by not playing.

Pilcher continued to live in Dunedin, working at Dunedin Airport, but in May 1998, like many before him and many after him, he took the journey across the Ditch.

He has lived in Surfers Paradise ever since, working in security, first at Jupiter's Casino and now at Gold Coast University Hospital.

Pilcher, now 54, said the sun and warm weather in Queensland was hard to match but Dunedin still held a big place in his heart.

''Sometimes over here the sun shines endlessly and you would not mind some rain.

''Not that it rains all the time in Dunedin. I try to get back once a year. I've still got family there and it is a great place to live.''