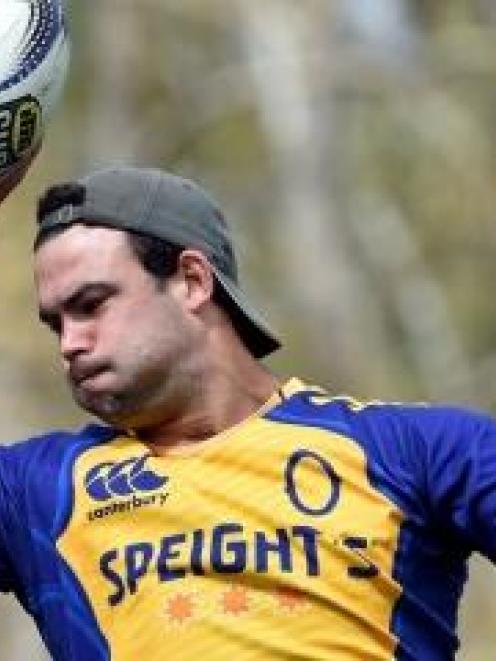 Tom Franklin
Highlanders coach Jamie Joseph has been forced to make a raft of changes to his team for tomorrow night's match against the Waratahs in Sydney.

Wheeler has been replaced by Tom Franklin in the second row, and Liam Squire replaces Pryor at No8.

Squire was down to start last week at the back of the scrum, but was a late scratching due to an illness.

Whitelock, forced off the paddock last week with a medial ligament strain, has been replaced by Elliot Dixon.

Ryan Tongia makes his first appearance of the season on the wing, replacing Osborne in the only change to the backline.

Lock Mark Reddish has recovered from a shoulder injury and has been named in the match-day team for the first time this season.

Despite being hit with injuries - another five players, Waisake Naholo (leg), Marty Banks (knee), Fumiaki Tanaka (calf), Tei Walden (concussion) and Josh Hohneck (head cut), were also unavailable - Joseph has still named a strong side to take on the 2014 champions.

Liam Coltman will start in his 50th game for the Highlanders, three years after making his debut. In a rematch of last year's semifinal, the Highlanders will face a dangerous Waratahs' outfit fresh off a bye, and no doubt stung by its 32-15 round two loss against the Brumbies.

But the Waratahs will be without first five-eighth Bernard Foley, who will miss a third-straight game with a shoulder injury. Foley picked up the injury in his team's final pre-season match against the Highlanders in Queenstown last month.

His return has been put off until next week, when the Waratahs play the Reds in Brisbane, meaning Kurtley Beale will again wear the No10 jersey. Waratahs coach Daryl Gibson has stuck with the same backline which failed to fire in a loss to the Brumbies, but he has made a couple of changes to his pack.

Wycliff Palu will make his first start for the year at No8, while hooker Tolu Latu comes in for the injured Tatafu Polota-Nau, who fractured his arm against the Brumbies.

Former NRL speedster Reece Robinson has been named on the bench as back cover and will make his Super rugby debut if he gets on.

The Highlanders will remain in Australia after the game, as their next game is against the Rebels, in Melbourne on March 26.