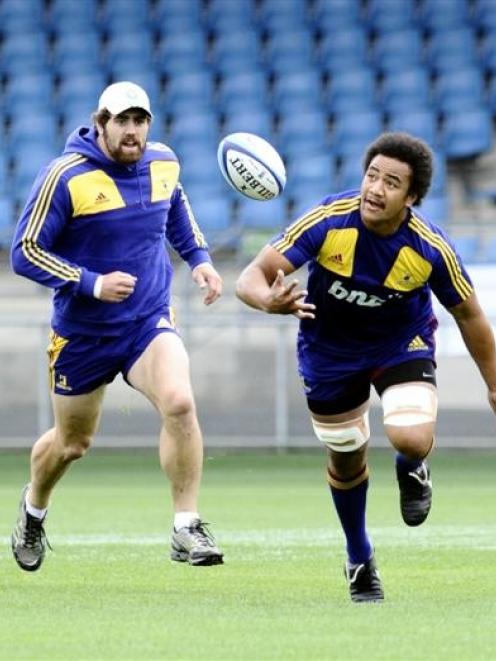 Highlanders No 8 Nasi Manu juggles the ball while captain Jamie Mackintosh backs up at Carisbrook yesterday. Photo by Gregor Richardson.
Jamie Mackintosh admits he has received unprecedented support as a Highlander in the past week but says it will all go to waste if the side does not put on a good performance tonight.

Mackintosh will make his debut as Highlanders skipper on Carisbrook tonight and is looking to make it the second win in a row for the franchise.

But beating the Chiefs is not going to be easy. The Highlanders have not beaten them since 2003 and the Hamilton-based side will be looking to make amends for a disappointing and losing performance against the Brumbies last Saturday night.

"They have got that many good players in their team that they will not play that bad twice. They created quite a lot of opportunities last week and they just did not work out," Mackintosh said.

"If we let them play then they can be lethal, so if we can stay on top of them they might fall into those habits they showed last week."

Mackintosh, who turned 26 last Sunday, was part of a gutsy forward effort last week which finished all over the Hurricanes and more of that is needed against the Chiefs.

"It wasn't the greatest game of rugby to watch but as far as our team it was a great building block and cornerstone as to where we are at.

"I think the boys showed a lot of heart at times in that game ... we didn't execute everything we wanted but we came away with the win".

"But we know more than anyone if we have a bad performance this weekend against the Chiefs it is all going to be thrown away."

Mackintosh said the key for tonight would be to take the chances on offer.

And he was quick to remind anyone within hearing distance the season is only one-week-old.

"We are only one game down and we could turn up this week and things could change and people will be talking about past years. For me it is about putting in a physical performance. We want to be a team that people do not want to play."

Mackintosh rejected suggestions the side had brought some Southland-like mongrel into the team this year.

"It's nothing to do with a Southland style. It is just the way the Highlanders have come together and want to play the game with a big emphasis at the breakdown. The thing with Jamie [coach Jamie Joseph] is you know what you get. There are no grey areas. It is black and white. He knows what he wants and that is to be hard and physical. If you are not then you'll be resting next week.

"That puts a lot of pressure on the players. You've got to front up every week and it was great to front up last week but we know we've got quite a lot to work on."

Mackintosh said the team had been buoyed by the feedback from the public since returning from Wellington.

"I know it is only the first week but I've never been in the Highlanders for the past five years where I've had so many people come up to me and say how proud they were and giving compliments."

Mackintosh was looking forward to playing in front of friends and family as the captain of the Highlanders on Carisbrook for the first time tonight.

"It makes me extremely proud to captain the Highlanders at Carisbrook for the first time. It is something that I will never take for granted.

Mackintosh will want his side to continue from last week although it needs to be more accurate on attack as does Lima Sopoaga in his goal kicking.

The Chiefs have some absolute match-winners out wide and if they feature prominently there will only be one result.

The Highlanders must deny them the ball, take chances when they come along, and, most importantly, kick their goals.

Showers predicted this morning are expected to clear this afternoon.

• The Highlanders will hold a collection to help earthquake victims in Canterbury. Money will be collected along with canned food in collection stations outside the ground tonight.