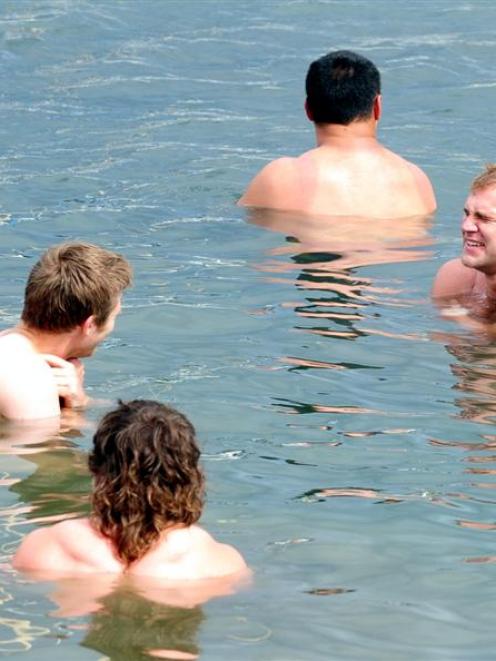 Testing the chilly waters of the Otago Harbour are (clockwise from bottom): Tim Boys, Chris Noakes, Bronson Murray and Sam Hibbard. Photo by Craig Baxter.
The Highlanders swung back into training yesterday.

The squad had broken for the Christmas-New Year break on December 23 but after two weeks away got back into business yesterday.

That included a dip in the Otago Harbour by the Otago Yacht Club which is part of the daily routine.

Team trainer Matt Dallow said research had shown up to 15 minutes in cold water at the end of training aided recovery and the chilly waters of the harbour were too handy to the training base at Logan Park to ignore.

Judging by the speed - or lack of it - the players have not totally embraced the idea of the cold dip at the end of training.

Coach Glenn Moore said the squad spent most of yesterday afternoon out on the training paddock.

Their first warm-up game is just over two weeks away.

Moore said everyone had come back from the break well, eager to get back into work.

There was a slight concern about centre Kendrick Lynn, who was carrying a groin strain, but he was being monitored and his injury appeared to be improving.

Testing on strength and speed would take place next week.

Much of the strength and conditioning work had been done and it was now about finalising the game plan and work on the paddock.

The team has a warm-up game against the Chiefs on January 23 at Carisbrook, with the game being played in the afternoon to suit the hot conditions expected in South Africa where both teams are travelling early in the season.

Moore said they were still waiting to work out other pre-season games and there was a possibility of a match against a Fijian side.

It was hoped to have that pinned down by the beginning of next week.

All Blacks Tom Donnelly and Ben Smith were expected to drift back into camp next week, as was captain Jimmy Cowan.

Moore said he was impressed with the spirit within the team, and the keenness of players to get back into work.

The side kicks off its Super 14 campaign against the Crusaders in Christchurch on February 13.