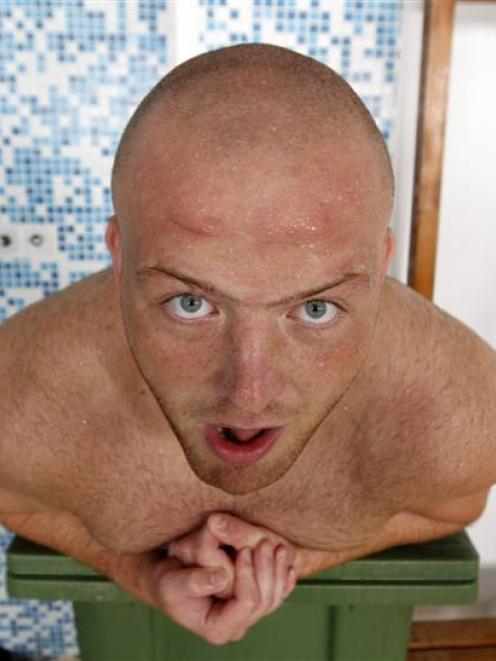 Romanian player Mihaita Lazar stands in a bin filled with ice during a recovery session at the Poiana Brasov mountain resort, in Romania. Photo by Reuters.
We begin a series looking at the six teams visiting Dunedin during the Rugby World Cup. Today, Steve Hepburn profiles Romania.

Romania once pushed the All Blacks close but this year it could be a struggle for what is an ageing side.

The team has plenty of experience as it plays in the lower tier of the European national competition.

Many of its players have played more than 50 tests and can rack up to a dozen caps per year, especially in trying to qualify for the World Cup, when they take on nations such as Russia, Georgia and Spain.

Romania was actually the last team to qualify for the World Cup. It placed third in the European qualifying pool, and played Uruguay in the playoff for the 20th and final place at the tournament.

After a 21-21 draw in Montevideo, Romania won the return leg 39-12 to seal its qualification and keep up its record of playing at every World Cup.

The side includes a good core of players who have been to the tournament before but rugby is not what it was in the country.

In 1981 the national side played the All Blacks in Bucharest and the Romanians lost only 14-6. However, 26 years later it was a completely different story at the World Cup in France, with the All Blacks winning 85-8.

Since the fall of the Ceausescu reign in 1989, when many players who were soldiers died in the violent revolution, resources and money have gone elsewhere.

The country has about 1000 senior players and the standard of the domestic league is mixed. The power of the game is concentrated in the capital and rugby is very much a distant second in team sports to football.

To try to help its forward play, the side has brought in former All Black prop Steve McDowell as a technical assistant.

McDowell has talked of the frustration with the lack of technique and the Romanians seem to be slow to take on his urgings about improved fitness and nutrition.

As with many of the lower tier nations, the side will have a reasonably strong set piece, with a steady scrum and a reasonable performing lineout.

In the backs the boot will be in full force, with Dan Dumbrava sure to plug the corners.

Romania will struggle against Ireland, Scotland and Argentina. It will target the game against Georgia, in Palmerston North, as one to win. But Georgia has improved greatly in past years and Romania may struggle.

~ GENERAL ~
• Capital: Bucharest
• Population: 22 million
• Facts:-
- Romania includes Transylvania, the mythical home of Dracula. Transylvania is actually an industrialised area of the nation, home to steel mills and factories.
- Nicolae Ceausescu was the ruthless dictator of the country from 1965-1989. He referred to himself as the conductor, and made an economic mess of the country, with millions dying of starvation. He was overthrown in a revolution in 1989 and executed by a firing squad.
- The great Nadia Comaneci came from Romania, and was the first gymnast to be awarded a perfect 10, competing at the Montreal Olympics in 1976.

~ RUGBY ~
• Coach: Romeo Gontineac.
• Captain: Hooker Marius Tincu.
• Previous World Cup performances: Been to every World Cup but never gone beyond pool play.
• Games: v Scotland, Invercargill, September 10; v Agentina, Invercargill, September 17; v England, Dunedin, September 24; v Georgia, Palmerston North, September 28.
• Players to watch:-
- Cristian Petre: An experienced lock who plays his rugby in France and will be expected to help present a solid tight five.
- Dan Dumbrava: A steady hand in the pivot position who has plenty of experience.
- Ovidiu Tonita: Playing for Perpignan in the French Top 14 has undoubtedly helped the steady loose forward, who has played in every game for Romania in the past two World Cups.