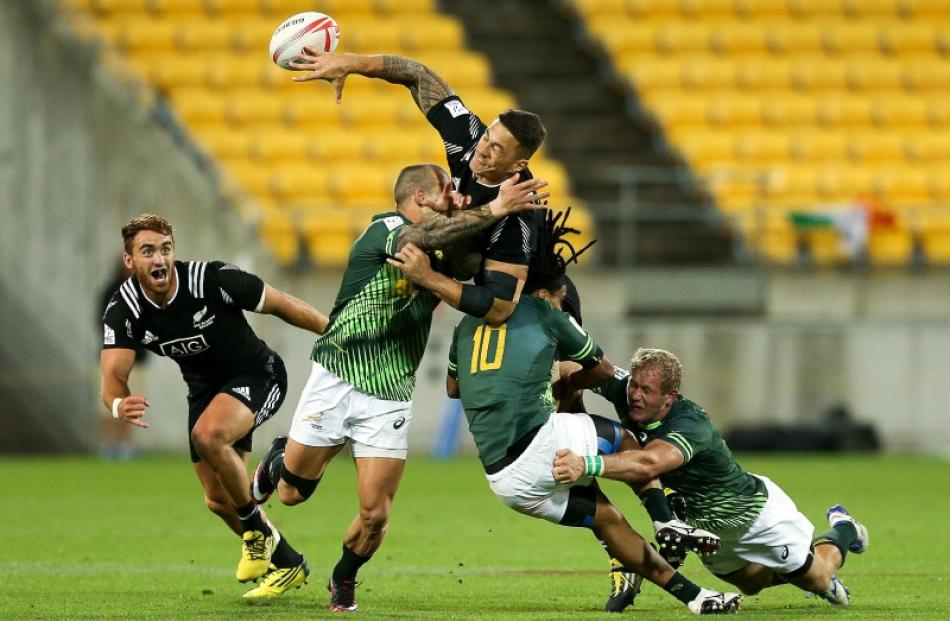 Sonny Bill Williams gets away the offload which set up Joe Webber to score the winning try against South Africa. Photo: Getty Images

New Zealand won all three of their matches to finish top of their pool on day one at the Wellington Sevens today.

After brushing aside Russia 38-7 and Scotland 27-7, they were pushed to the brink by South Africa, clinching the 19-14 win with a last-minute try by Joe Webber.

They changed their line up regularly throughout the day, ensuring all the newcomers got a taste of the action, while keeping a core of experience on the field.

That experience seemingly went missing in the first half against South Africa however, as New Zealand were messy and found themselves under plenty of pressure. After struggling to create any chances for most of the half, an Akira Ioane break and offload put Sam Dickson in to give New Zealand its first points.

Trailing 7-5 at halftime, they came out for the second spell with far more urgency and began to look better in their execution. It was Ioane who created, and this time scored, the next try too, showing his pace by beating Francois Hougaard on the outside.

A wayward offload from late replacement Sonny Bill Williams saw South Africa pounce to take the lead. It was Williams who put Joe Webber into space minutes later though, sealing the 19-14 win.

Ioane was arguably New Zealand's star performer of the day, while Tim Mikkelson got through plenty of work.

On the other side of the draw, Fiji were in devastating form and will meet the USA in their quarterfnal, while England match up with Argentina.