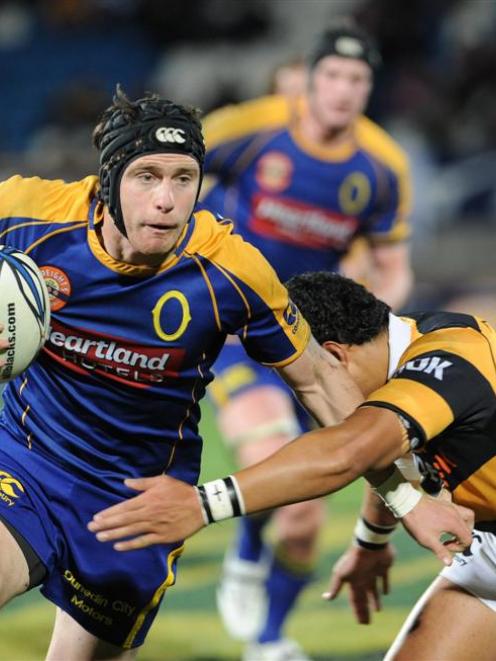 Ben Smith, pictured playing for Otago against Taranaki at Carisbrook last week, will make his international sevens debut at the Commonwealth Games. Photo by Peter McIntosh.
He is the outstanding Otago rugby back of his generation and now he hopes to help continue New Zealand's remarkable record in Commonwealth Games sevens. Sports editor Hayden Meikle talks to Ben Smith.

Ben Smith doesn't have to look far for inspiration as he prepares to take a break from Otago to chase gold in India.

Smith and Otago team-mate Adam Thomson will miss three weeks of what has so far been a disappointing ITM Cup campaign to play for the New Zealand sevens team in the Commonwealth Games in Delhi next month.

The pair already rub shoulders with a gold medallist on a daily basis.

Their captain, Alando Soakai, was in the 2006 squad that won in Melbourne.

Smith was just 12 when he watched a star-studded New Zealand side win the first sevens gold medal, in Kuala Lumpur in 1998.

"I remember they had Jonah Lomu and Christian Cullen and those guys. And I watched a fair bit in Melbourne four years ago. The Otago guys, Soaks and Josh Blackie, were playing really well."

Of all the New Zealand team in Delhi, the sevens players have the most intimidating record to protect.

Three Games, three golds - Smith is aware of the perfect record but does not think it will affect how this year's squad prepares for its campaign.

"We haven't really talked about it much. Sevens has come a long way in the last few years. Watching a bit of the world circuit, it looks like most of the top countries have got quite a bit closer."

Smith is in his fourth year with Otago, has starred in two campaigns for the Highlanders and boasts an All Black jersey after making his test debut against Italy last year.

"To be honest, I wasn't really thinking about sevens this year. But the opportunity has come around and it's great. I'm looking forward to it.

"A couple of months ago, they asked if people were available for selection. It's all happened pretty quickly from there."

Smith said he sought some advice about the merits of taking a break from rugby, and about what playing sevens could do for his development.

The examples set by Soakai, Blackie and Thomson, who became an All Black after an extended spell with the Gordon Tietjens-coached sevens team, helped his decision.

Working with Tietjens, the long-serving sevens coach with notoriously high fitness standards, for the first time was literally breath-taking for Smith.

"We got up there and he put us straight into a yo-yo, which is sort of like a beep test. Then we were straight to the paddock to run lengths of the field.

"I had in the back of my head what everybody else has been saying, that it was going to be tough. And it definitely lived up to that.

"I've got to do a bit more fitness work, and keep on it. I have wee targets I want to reach to make sure I can hold my own."

Smith has played for Otago twice at the national sevens tournament in Queenstown.

A fullback, winger or midfield back in rugby, he generally plays first receiver in the sevens backline.

"It's great. I really enjoy sevens. You get to have a dab all over the place."

The sevens players have had security briefings about what to expect in India and Smith is eagerly anticipating the sights and sounds of a country that is off rugby's beaten track.

He also hopes to get a chance to watch some of his New Zealand team-mates in action.