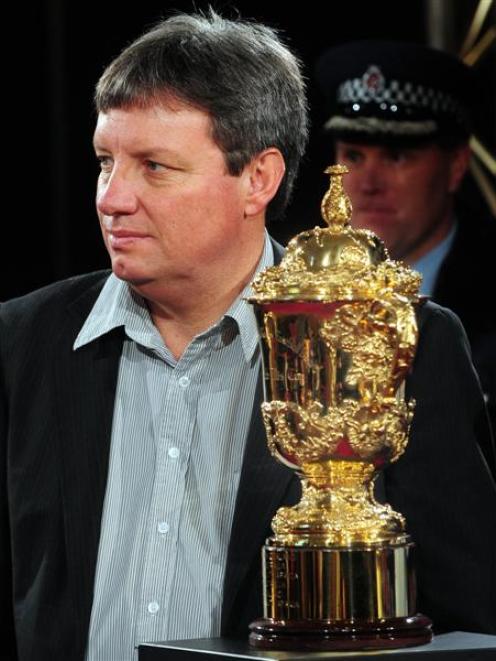 Snedden has been in Dunedin for the last two days to promoting next year's World Cup and was a guest speaker at the Otago Sports Awards last night.

During his stay he met officials and visited the stadium construction site. He was impressed with the progress.

"It looks stunning. I probably timed this visit right in terms of them getting the roof truss up last week," Snedden said.

"From what I can gather, it was probably the risky part of the whole process. They've still got a long way to go ... but I feel great about it. At the moment, it looks as though it is going exactly as it is meant to."

Following his visit, Snedden said he was now more confident the $200 million facility would be ready in time for the event which gets under way in September next year.

"I think the punters want to be sure the matches are being played at the stadium. So they are just probably waiting a little bit longer to be clear that that is going to be the case," Snedden said when asked if interest had been strong for the pool B games being staged in Dunedin.

"We know when there is clarity it would pick up straight away."

The first phase of ticketing for the tournament ended yesterday. Fans had from April 27 to May 21 to apply for venue and team pool packs.

"[Interest] has been terrific. At Eden Park we've got a situation where we've had far more applications received than the seats we've got available to us at this stage."

More tickets may become available if the International Rugby Board fails to sell its allocated tickets, Snedden explained.

Applications for the quarterfinal games in Christchurch and Wellington had also been strong and demand for pool games in the other regions has been steady.

"In terms of the rest of the venues, it is exactly as we expected. We've got a solid pick-up but our view is it takes longer for the areas that are not hosting the absolute plum matches. But we're delighted with where it is at overall."

Applicants will find out whether they have been successful in July.

The second ticketing phase will see individual tickets released for every match except the semifinals and final, which will be sold through a ballot system. The second phase is expected to start in October.

The final phase will enable fans who applied for tickets in phase one or two to elect to enter the ballot system for tickets to the semifinals and the final. The final phase is expected to start in November and any remaining tickets will go on sale in 2011.

However, people might have to pay a little extra for tickets with GST rising from 12.5% to 15% on October 1.

"We've been doing a bit of work on that in the last few weeks because we anticipated that GST would go up a little bit.

"We are still working our way through that and I don't know the answer yet. But I suspect within a few weeks we'll know."