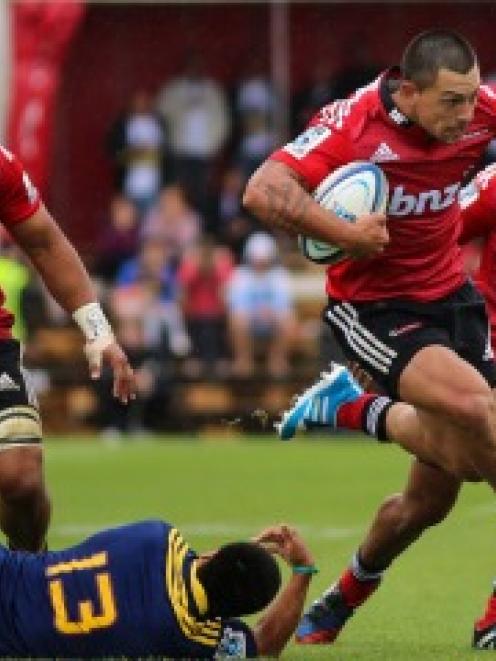 Working with ITM Cup rugby players, University of Canterbury researchers developed a simple and cost effective way to measure stress in the human body, which they also hope could be rolled out in hospitals to monitor surgery patients.

Designed to help find ways to keep players healthy for longer and prevent injuries, All Blacks' strength and conditioning coach Nic Gill has not ruled out introducing the testing in the future.

Taking urine and saliva samples - "because rugby players spill enough blood" - before and after a game, and then a few days later, they were able to measure the levels of stress and trauma the players' bodies went through, and their recovery time.

The trauma levels showed damage in the "ranges expected from serious trauma", the researchers said, likening it to a car crash.

The tests were honed down to four "gold standards" of trauma, which could be easily measured: muscle damage, inflammation, immune resistance and mental stress.

"The idea was to give coaches an ability to judge how banged up or stressed or damaged individual players are. It allows them to get a measure of how each individual responds to the type of rugby games they're involved in," associate professor Gieseg said.

"It's pretty obvious when someone breaks a leg or tears a hamstring, but there's a lot of small damage and micro damage that doesn't show up until much later."

The team was also interested in using the testing in a clinical setting to monitor a patient during an operation.

"These measures theoretically should be able to tell the surgeon how the patient handles the surgery."

It was now hoped the New Zealand Rugby Union would take it on board.

Mr Gill, who assisted with some of the research, said the results were "interesting", but not yet at a stage where the tests could be applicable on the field.

"I think if Canterbury University continue to develop the procedure and their understanding of the results, it could one day have great application," he said.

"At the moment, it's not something that in the All Blacks we'll be pursuing vigorously in the immediate future, but we're definitely interested in watching closely the development."

While he believed players' bodies "adapt to a degree" to the collisions experienced during a season, he said the aim was to keep players "on the park for longer".

"We're trying to prevent injuries and trying to keep players healthy, so this is where this is heading, and maybe one day it's going to be at a point where it's useful rather than just interesting."

Retired New Zealand rugby player Paul Tito is not surprised at the comparison between rugby injuries and trauma suffered by car crash victims.

"I think the game's changed a lot since I left New Zealand. It's a lot more physical and the players are a lot stronger and bigger, so it doesn't really surprise me."

After a string of injuries, the 36-year-old lock called it quits on the game in 2012.

"I played rugby for a fair amount of time, and concussion - at the end of the day - got the better of me."

The worst symptom from the concussion was the effect on the player's eyesight.

"I couldn't really live a normal life. I spent a lot of time on the couch, but I couldn't watch telly without blurred vision.

"That was the worst thing for me was just my vision - I couldn't drive for a month."

There was better education about head injuries now, Tito said.

"I was a little bit old-school. I had a job to do and I wanted to do it the best I could.

"I still think rugby players will still get out there and die for the cause - I don't that will ever change - but I think with the research that is getting done with head knocks especially, we've got to be a lot more strict about when these boys can get back into the game."

Tito's concern lay with younger players who might not have reaped the financial benefits that came with top competitions before becoming injured, "and hello, they're out on their ear and back into the real world".

- By Patrice Dougan of APNZ