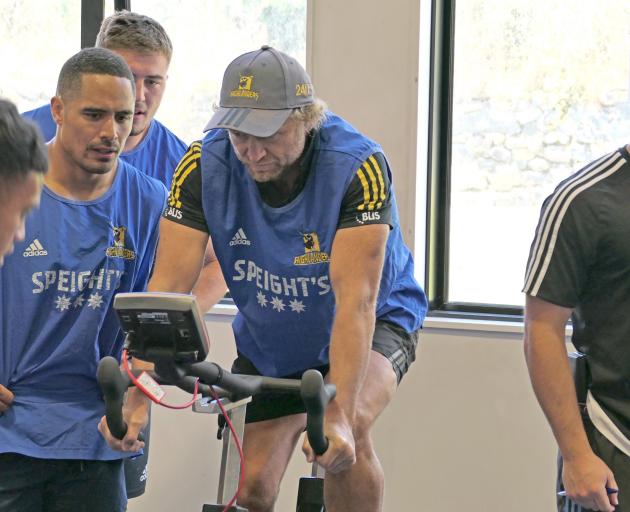 Well, "new" might be a stretch — but "excitable" is certainly accurate.

The presence of All Blacks star Aaron Smith, the most experienced Highlander with 163 caps, in camp at the height of summer has been a boost for the squad, which has its talismanic halfback on deck as he played only a limited role for the national side in the latter months of 2021.

"It’s been really good to have Aaron involved in the pre-season," Brown said yesterday.

"It’s probably seven or eight years since he’s done a pre-season with the Highlanders, so it’s good to have him here.

"He’s fizzing. It doesn’t matter what training or what day it is — if he’s involved, you’re always training with a lot of energy and excitement."

The early weeks of their pre-season had progressed smoothly, Brown said.

It was intensive stuff as the Highlanders did not have as much time as usual thanks to the delayed finish of the NPC.

"That creates a bit of anxiety for the coaches and trainers to make sure we get the squad really up to speed.

"The majority of our training has been focused on fitness, but we’re starting to work on our game now. We’re doing some set piece, and some contact stuff, making sure we are ready for our first pre-season game."

Brown said he was looking forward to taking the Highlanders to Weston to play the Crusaders on February 4 as he had heard the Valley club’s home ground was a good spot.

There were no new injuries to report, Brown said.

Smith’s fellow All Blacks, flanker Shannon Frizell and prop Ethan de Groot, remained on leave as they had heavier workloads, and would not return till the end of the month.

Tasman prop Luca Inch remains with the squad as cover for de Groot, and Otago loose forward Sam Fischli as cover for Frizell.

Both flanker Billy Harmon and halfback Folau Fakatava remain on track with their injury rehabilitation.

The Highlanders have also taken on board three players on development contracts.

It was a New Zealand Rugby initiative designed to help young players by giving them an opportunity to combine study/career with a professional rugby programme, Highlanders chief executive Roger Clark said.

Meanwhile, the Highlanders coach has used some of his meagre spare time to keep an eye on the revamped Japan Rugby League One.

Brown, who will head back to Japan after the Highlanders season to rejoin Jamie Joseph in the Brave Blossoms coaching team, has liked what he has seen, especially from pace-setting Suntory Sungoliath and its star new fullback.

"Suntory have looked pretty impressive. Damian McKenzie has slotted in well and had a big impact, so they’re looking good.

"The standard looks like a good watch so far."