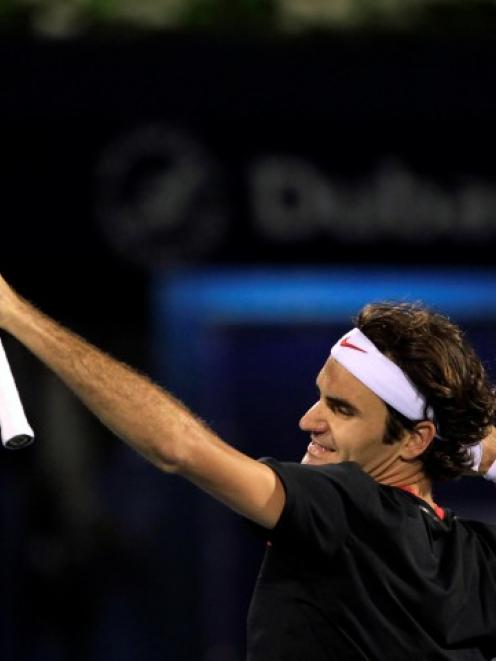 The 16-times grand slam winner may no longer be favourite for the top prizes but few can match his longevity or dedication on the gruelling men's tour and the 30-year-old claimed his fifth Dubai title without dropping a set all week.

"Against Andy I knew I had to stay aggressive but not overly - you don't want to overhit," Federer told reporters. "I think I found the right balance out there tonight."

The Swiss has now won five of his past seven tournaments since reaching the semi-finals of last year's U.S. Open.

"There is no substitute to confidence," said Federer. "I'm defending much better than I was in the middle of last year where I felt like I couldn't come out of tough defensive positions anymore. I was able to turn it around. Now, I just have to keep it up."

Third-seeded Murray went into Saturday's final with an 8-6 winning record against second seed Federer, although the Swiss has won both of their grand slam encounters.

Murray, 24, did beat world number one Novak Djokovic on Friday to reach the final and gain revenge for his semi-final defeat by the Serb in January's Australian Open.

But he was strangely lacklustre against Federer and struggled to get his service going with his first serve percentage dipping from a modest 58 in his opening four service games to a lamentable 38 over the next five.

Federer, in response, abandoned his strategy of hugging the baseline and instead prowled the net at every opportunity on both his and Murray's serve.

The Swiss broke the three-times grand slam finalist at 5-5 in the first set and again early in the second to take a seemingly decisive 3-1 lead but the Briton produced two brilliant lobs to square the set at 3-3.

Federer remained unfazed by his opponent's fightback and attacked Murray's second serve to force the Briton to net a backhand for a decisive 5-4 lead.

Serving for the match, Federer hit a series of stinging forehands into the left side of the court to earn match point and sealed victory with a blistering winner past a subdued Murray.

"I made a few too many mistakes in the second (set) and he was playing a lot more aggressive than in the first set," Murray told reporters.

"Overall it was a good week. It was perfect preparation for the stretch over in America. I got through very tough matches against top players, so it was good," added Murray, who will now fly to Los Angeles for the first Masters tournaments of 2012.