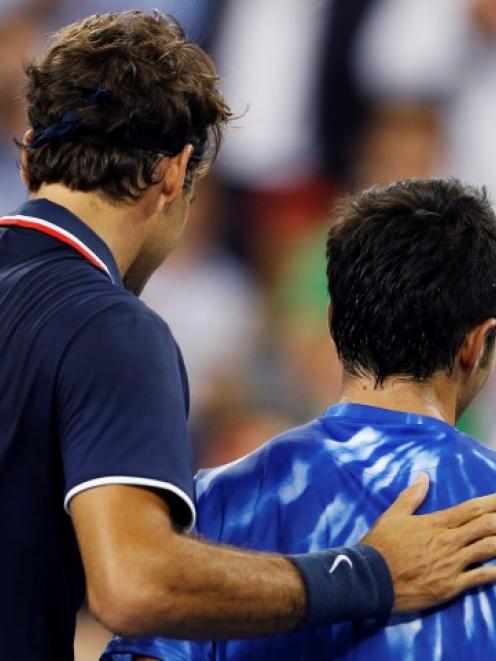 Roger Federer of Switzerland (L) pats Bjorn Phau of Germany on the back after defeating him at the US Open in New York. REUTERS/Adam Hunger
World number one Roger Federer put on another evening exhibition at Flushing Meadows as he brushed aside Germany's Bjorn Phau 6-2 6-3 6-2 to reach the third round of the US Open.

The five-time champion smashed 15 aces and 44 winners in all as he followed up his confident first-round win with another immaculate display, wrapping up victory in just 90 minutes.

"I enjoyed it a lot, it was a great match for me," Federer told the packed crowd inside the cavernous Arthur Ashe Stadium.

"I always enjoy it when I have the chance to come out here at night and make it a match for you guys."

In the last game of the match, Phau had the temerity to hit one reflex backhand pass off a Federer smash that the Swiss agreed had been the shot of the match.

"Bjorn had some incredible shot-making," Federer said. "That backhand was ridiculous really.

"When it's against you, you don't really enjoy it but I was leading so it was OK. It was a lot of fun."

World number 83 Phau was once renowned as the fastest player on the Tour but, at 32, his speed is on the wane and Federer had him on the stretch from the start.

The Swiss broke in the fourth game to establish control and never loosened his grip on the match as he cruised through to a clash with Fernando Verdasco of Spain.

Federer has won all four of his meetings with Verdasco but knows better than to underestimate him when they play on Saturday.

"He's a great player," he said. "He's been around a long time and had his share of big wins so I am not going to look any further than him." 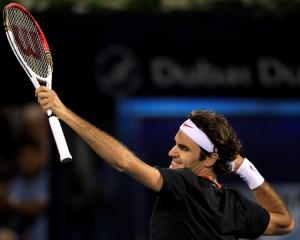