National has unveiled its new-look line up with big promotions for Chris Bishop and Erica Stanford, now ranked fourth and seventh.

Bishop has been reunited with the shadow leader of the house portfolio, which former leader Judith Collins stripped him of.

Stanford has taken education from Paul Goldsmith, and retained the immigration portfolio.

She has rocketed up the rankings. having been ranked 25th previously.

Collins is one of the biggest losers, demoted to 19th. But she still stays in the shadow cabinet, and has the research, science and innovation portfolio.

New National Party leader Chris Luxon has decided to part with the tradition of giving the entire caucus - except new and departing MPs - a numbered ranking.

Instead, he's given rankings to the first 20 MPs, and left the rest unranked.

"My shadow Cabinet leverages the wealth of talent and depth of real-world experience across the National caucus team," Luxon said today.

"I have deliberately selected a shadow Cabinet of 20 members to match the Government's Cabinet. 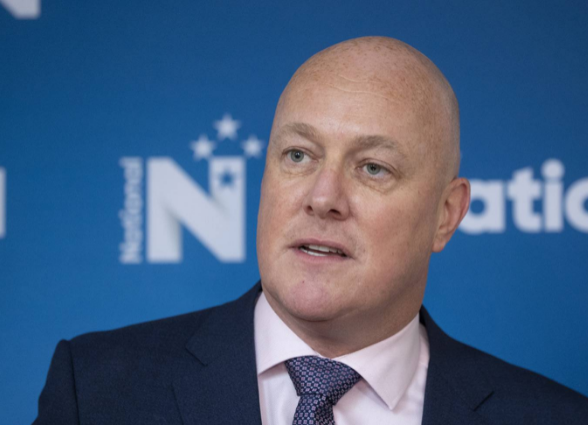 "I'm confident that when you put any of National's shadow ministers against their Labour counterparts, you'll see that National's MPs have the deep experience, the political skills, the work ethic and the intellectual grunt to come out on top every time," Luxon said.

Former deputy leader Dr Shane Reti has suffered the least of Collins' former team. He has fallen from second place to fifth. And he has kept health and been given the Maori-Crown and Pacific Peoples portfolios.

Whip Matt Doocey has kept mental health and youth and been given a ranking of 8. He was previously ranked 20. He has been given the associate transport portfolio. It is unclear whether he retains the whip.

One MP to suffer a severe drop is Todd McClay, falling from number six to the unranked bottom of the list. He's got the trade portfolio and tourism.

Simeon Brown continues his dramatic rise, climbing up the ranks from 19 to ninth. He's dropped his police portfolio (given to Mark Mitchell - number 14, down one) and been given transport and public service.

Collins ally David Bennett has been stripped of transport, and dumped to 20th.

Veteran MP Gerry Brownlee is ranked 14, and has retained the foreign affairs and spy agency GCSB and SIS portfolios.

Goldsmith will be spokesman for justice, workplace relations and safety. 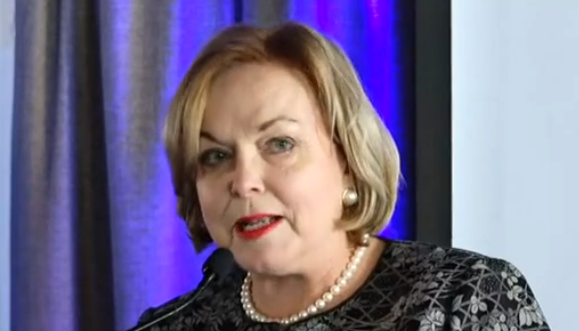 Bayly now has small business, commerce, manufacturing, building and construction, and revenue, and is ranked 15.

Woodhouse has state-owned enterprises, ACC, statistics, sport and recreation and is ranked 18.

Luxon's deputy, Nicola Willis, has the number two spot, and last week leadership rival Simon Bridges was given the finance and infrastructure portfolios and a ranking of number three.

Earlier today, it became clear the reshuffle would be the first test of what will be a big week for Luxon, who assumed the leadership last Thursday.

On Tuesday he will face Prime Minister Jacinda Ardern in question time. It will be Luxon's first time squaring off against the Prime Minister as leader of the Opposition, and a huge test for his leadership.

Collins was deposed from the leadership in a no-confidence vote that followed her decision to strip Bridges of his portfolios and demote him as punishment for a lewd joke.

The episode was widely seen as an attempt by Collins to save her own fragile leadership from Bridges, who was known to be mounting a coup against her. 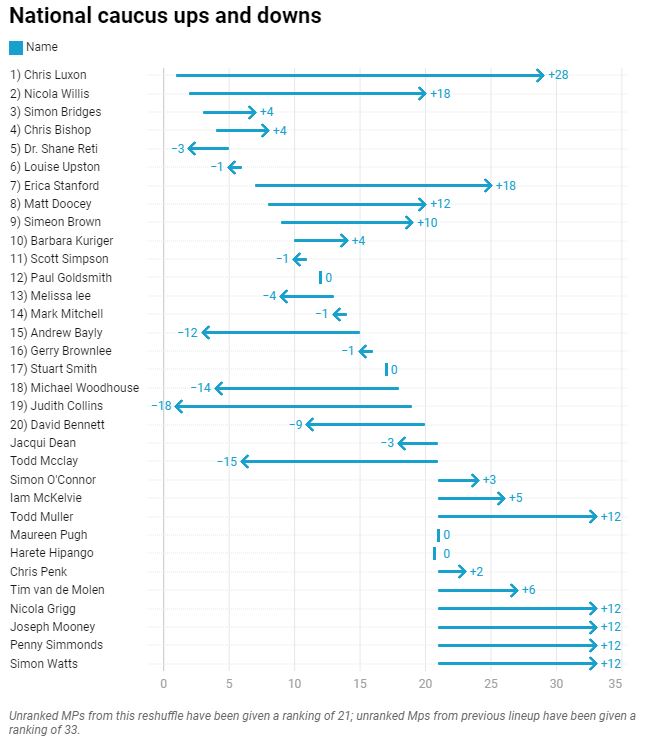