0 Comments
A woman sent fake bomb threats to the University of Otago warning of carnage greater than the 2019 Christchurch mosques attacks to stop her parents from finding out she was not graduating.

The former student was sentenced to five months’ community detention and nine months’ supervision when she appeared in the Auckland District Court yesterday.

The woman, who has interim name suppression, was a top pupil in primary school whose mental health and grades suffered after her move to New Zealand, and dramatically worsened in university, Judge Claire Ryan said.

"Your parents, family and friends were proud of you, and you were too frightened to tell them of your failures," Judge Ryan said to the woman.

Now in her early 20s, the woman sat in the public gallery with her head bowed, accompanied by her parents and brother.

She failed her first year of university twice and, suspended from enrolling a third time under the institution’s academic policy, transferred to an Otago Polytechnic course.

She did not tell her parents, who thought she was doing well at university.

She also tried and failed to get a bank loan to buy a fake graduation certificate online.

At her wits’ end, she went to a public library and sent her first email with the title "Beware, gun attack at graduation ceremony" on December 4, 2020, using a new email she had created with the user name "far.right". 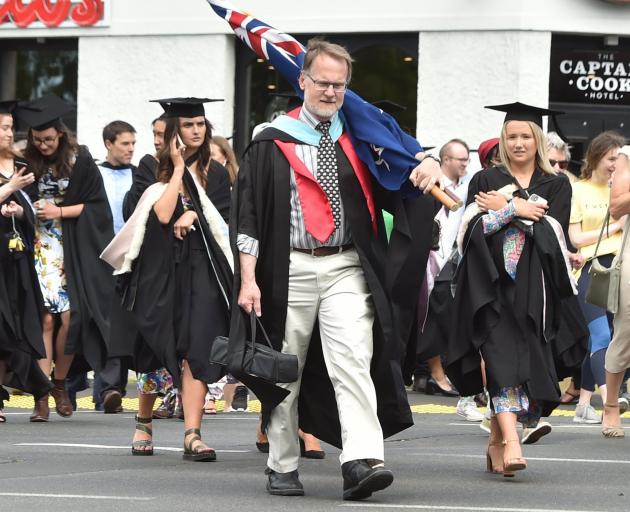 Caroline Freeman College warden Chris Addington, carrying a flag, together with students and family after the cancellation of an Otago University graduation ceremonies in Dunedin in December 2020. PHOTO: PETER MCINTOSH
It bounced back, so she created more email accounts, including "white.supremacy.rocks", to send the same message again that afternoon.

"Dear University of Otago," she wrote, "Since you c***s have suspended me I’m going to ruin your graduation with some firearms and a little touch of explosives. The town hall will make quite a boom.

"I will make the mosque attacks look like child’s play ... Are you going to take the gamble?" the emails read.

University staff received the email threats, and the University of Otago and Otago Polytechnic eventually called off their December 2020 graduation ceremonies and parades at the 11th hour.

The woman did not deny the facts when questioned by police, saying she feared her parents would disown her if they found out she did not have a degree.

She was seen wiping away tears and her parents wept audibly during the more than two-hour sentencing hearing.

Thousands of students and their families had travelled to Dunedin for the graduations after a challenging year of Covid-19 lockdowns, restrictions on school and home life, suffering what the judge called "significant loss emotionally and financially".

Not all were from wealthy, stable, happy homes, Judge Ryan said.

The alarming specificity of the gun and bomb threats were chilling, the university vice-chancellor said in her victim impact statement read out by the judge, and the link to the Christchurch mosque massacre was especially disturbing and callous.

The cancellations and the aftermath cost the university an estimated $1.3million.

They were former refugees, people turning their lives around and becoming the first tertiary graduates in their family, and many families had travelled from North Island for the graduations.

"The cost was far beyond what money could buy."

The judge declined the defendant’s application for a discharge without conviction, saying the offending was serious because of the reference to right-wing white supremacy and the Christchurch mosque attacks in her threats.

She also rejected the defendant’s permanent name suppression, which lapses later this month.

At the name suppression hearing earlier yesterday, counsel John Munro said the defendant suffered from anxiety and depression — relying on three different drugs — and publication of her name could lead to a downward spiral.

She did not fit the mould of a person facing charges aligned with terrorism, he said.

Crown prosecutor Robin McCoubrey said the scale of offending was "very grave", robbing thousands of graduands and their families of the chance to see the reward for years of study.

The woman had many opportunities before graduation day to tell her parents the truth, he said.

University of Otago vice-chancellor Prof David Murdoch said last evening he was pleased there was a result from the court case.

"The offender’s actions were at the serious end of the scale and threatened the privilege New Zealanders have to be able to live in a safe and free society.

"Thousands were impacted by the woman’s actions and what occurred would remain "remain in our collective consciousness for many years to come," Prof Murdoch said.