By Hayden Meikle
0 Comments
All Blacks captain Sam Cane says there is no great secret to dealing with the regular disruptions caused by Covid.

You just had to learn to live with it, like everybody else, Cane said as he reflected on the latest case in camp ahead of the second test against Ireland at Forsyth Barr Stadium on Saturday night.

Three backs missed the first test — all have returned to training this week — and yesterday it was the turn of the forward pack.

Lock Tupou Vaa’i has tested positive for Covid and is in isolation in Dunedin.

Cane is not the type to get flustered anyway, but he merely shrugged when asked if another week of pandemic problems, even if it remains a solitary new case, would galvanise the rest of the squad.

"It’s not just the last week," he said after training at Logan Park.

"Guys have learned to deal with it and roll with the punches for 18 months through Covid now.

"It’s impressive that it just doesn’t fluster the boys. Someone else will step up.

"Tupou has been playing awesome rugby and sort of hanging out for his opportunity, so it’s a tough pill for him to swallow.

"But we’ve almost got to the stage where Covid is lurking and it will strike soon for anyone who hasn’t already had it." 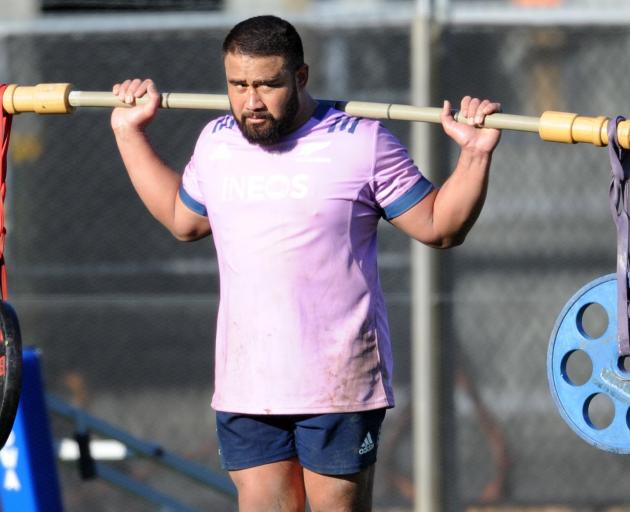 All Blacks prop Nepo Laulala balances weights at Logan Park yesterday. PHOTOS: GERARD O'BRIEN
Will Jordan, Jack Goodhue and David Havili are on deck this week but their status for selection remains unclear.

Cane said there was absolutely no pressure on the trio to rush back into the test arena following their time out with the virus.

"They were on a bike yesterday with heart rate monitors, so all precautions are being taken there.

"The last thing anyone would want is to risk them getting long Covid. They’ll have to tick a few boxes during the week to even be available."

The bad news — especially for a locking unit already missing young buck Josh Lord — did not stop at Covid.

Veteran lock Sam Whitelock has been diagnosed with delayed-onset concussion and, in line with World Rugby’s new guidelines on head injuries, is out for the series.

He has been replaced in the squad by 41-test lock Patrick Tuipolotu, who is back from a sabbatical in Japan and has received New Zealand Rugby clearance to play, having initially been told he would need to play NPC rugby to be eligible for international selection.

"Sammy was awesome at the weekend and became the second-most capped All Black of all time, which is hugely impressive," Cane said.

"We’ll no doubt miss his leadership and what he brings.

"But Patrick trained with us last week and he’s up to speed." 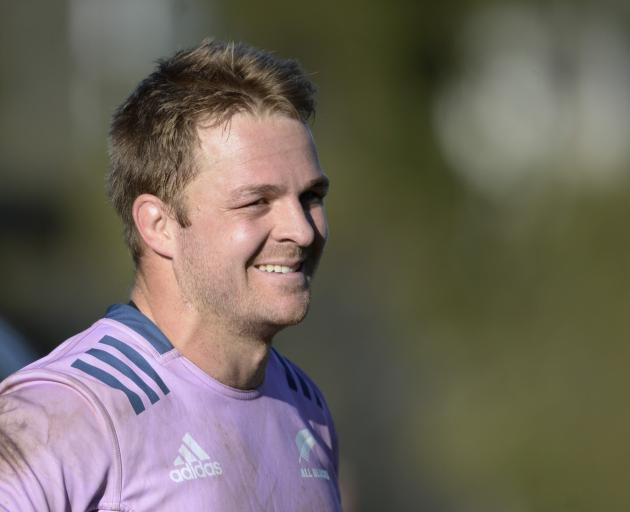 "Sam runs the lineout particularly well, but Brodie will take over that mantle, and he’s ready and looking forward to doing that.

"It’s crazy he’s played 90-odd tests and his locking partner has always been the one running the lineout, but he’s done it at Super Rugby time and time again."

Speaking of Retallick, it is 10 years since Cane made his debut alongside the great lock and halfback Aaron Smith against Ireland.

Cane is still just 30 and is enjoying captaining the All Blacks too much to think too deeply about what the decade, and all its highs and lows, has meant to him.

"I remember guys saying how it always goes so quickly, and as a young fellow, you find that hard to believe.

"You reflect a little bit, but it’s just cool I’ve been able to live out a dream for so long."

The All Blacks bucked the trend at Eden Park by shucking any hint of early-season rust and delivering a whopping performance against one of the world’s best teams.

Fizzing up again for the Dunedin test was a given, Cane said.

"It’s never easy to get up for a test straight after another one. There’s always that day or two of soreness, and a bit of mental fatigue, I suppose.

"But that doesn’t last long. As soon as we got down to Dunedin and settled in, we were energised and looking at areas to get better. 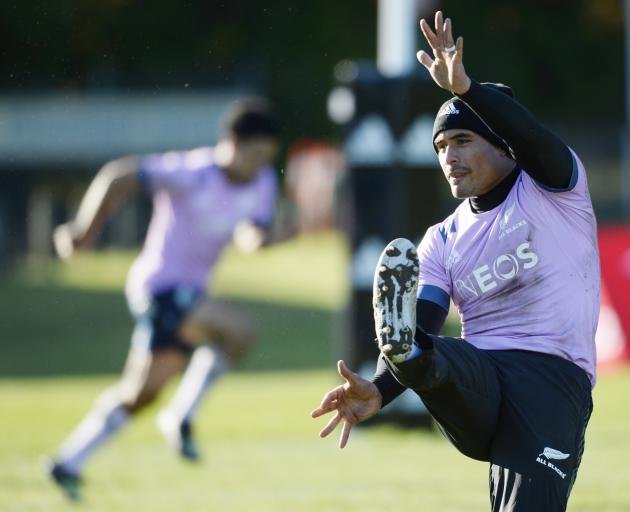 Halfback Aaron Smith stretches his legs.
"Under the roof at this time of year is exciting. We want to play fast and use our skills."

Two Highlanders forwards have joined the All Blacks as training partners.

They will not be part of the squad unless there are further injuries or Covid cases.

Dickson is on high alert as he is due to became a father this week.

Meanwhile, Ireland captain Johnny Sexton has been passed fit to play on Saturday.

Sexton was taken off with a suspected concussion during his team’s 42-19 loss in Auckland, but Ireland assistant coach Mike Catt confirmed the 36-year-old will be available for selection.

"Johnny is fit; Johnny has passed every test that he needs to pass, so from our point of view he’s good to go."

Sexton was not allowed to return to the field on Saturday having failed an initial Head Injury Assessment. — Additional reporting Reuters