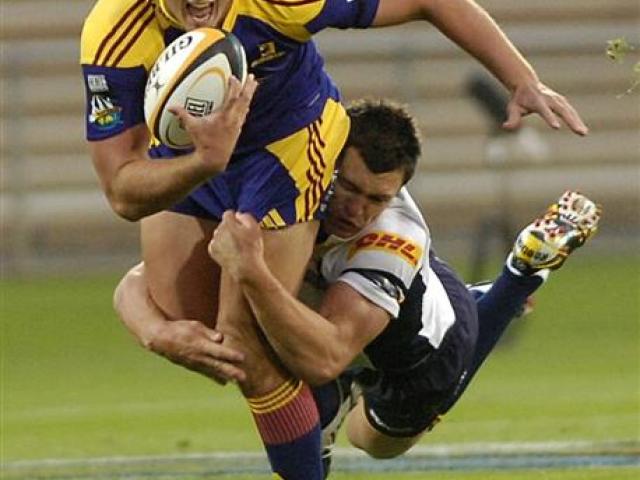 The Highlanders can see the space to attack and score but it is getting the ball there that is the issue, captain Jimmy Cowan says.

COMMENT: The Highlanders have one game left but the season is gone, with the question as to whether enough progress has been made this season hanging over the team.

Highlanders openside flanker Alando Soakai has fully backed the call by All Black coach Graham Henry that refereeing interpretations are making the game a lottery.

Highlanders coach Glenn Moore is demanding a better set-piece from his side in this weekend's do-or-die match against the Sharks in Durban.

With dropped ball on average once every two minutes, this match will not find its way to rugby heaven.
Highlanders coach Glenn Moore says his side paid dearly for two errors in the narrow loss to the Sharks in Durban.

Those play-off hopes just disappeared into a dark night.

Highlanders coach Glenn Moore said the laws intended to clean up the breakdown have, if anything, made it more confusing.

Kees Meeuws is laid up at the moment but he has not thrown the boots away yet.

Highlanders captain Jimmy Cowan has received no further punishment for his contentious tackle, capping a perfect day for New Zealand players in front of the Super 14 rugby judiciary.

Highlanders No8 George Naoupu believes a change in attitude and passion is needed for the side's match against the Stormers tomorrow night.

The Highlanders have four games left in this year's Super 14 and coach Glenn Moore still believes his side can make the semifinals.

Most Highlanders fans will be glad the Blues' first-choice front row is not able to front tonight, but the big southern man in the engine room thinks differently.

The Queensland Reds' southern rugby curse continued when they went down 24-19 to the Highlanders in a Super 14 match at Invercargill tonight that could have gone either way.

Pretty it was not but, when all is said and done, it was a win.

Highlanders vice-captain Jason Shoemark says the side knew it did not play well on Saturday night but to come away with a win showed a new maturity in the team.

Highlanders assistant coach Peter Russell has given his backline a pass mark but says there is always room for improvement.

The Highlanders returned from their week off yesterday, eager to continue winning momentum, and should have the luxury of picking from an injury-free squad this week.

If ever there was a time for the Highlanders to deliver a top-class performance it is tonight.