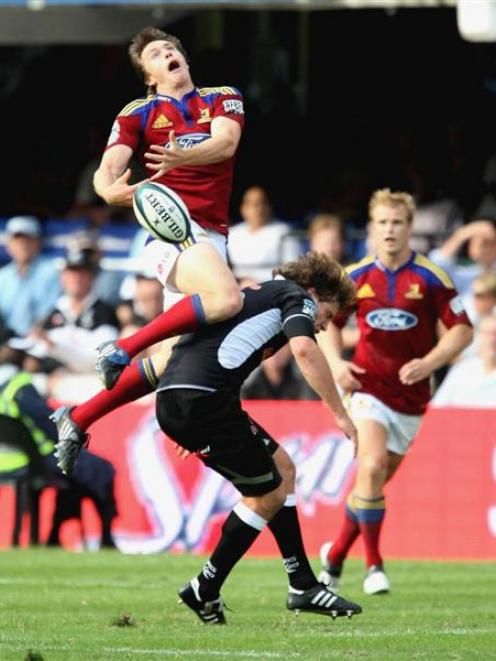 Highlanders winger Ben Smith goes high for the ball and lands on Francois Steyn, of the Sharks, during the Round 12 Super 14 match at ABSA Stadium in Durban yesterday. Photo by Getty Images.
With dropped ball on average once every two minutes, this match will not find its way to rugby heaven.

But the Sharks, who dropped twice as much ball as the Highlanders, still did enough to win in Durban yesterday morning (NZ time).

They had more possession and territory and the visiting side was hampered by a poor scrum.

The Highlanders could not nail their chances when they really counted and a couple of errors at vital times really cost the side.

The southern franchise hung in there but needed to score when they had the ball and territory early on in the second half, when trailing just 17-15.

They could not, thanks to some silly little errors, and gradually the game slipped away from them.

Two penalties from Sharks halfback Rory Kockott was all the scoring in the second 40 minutes.

The Highlander scrum went backwards all match, so the Sharks were not disadvantaged by their countless knock-ons.

The visiting side's line-out went well enough, but once again there was just not enough continuity shown to put the Highlanders in front.

The match meandered through the second half, and if the Sharks want to go further in the competition, they must learn to finish better.

The game ended on a sour note.

Kockott was then red carded for a nasty slap on Highlanders loose forward Adam Thomson.

Sharks replacement Keegan Daniel was then yellow carded for a spear tackle after the hooter.

In the first half, the Highlanders took a while to get their hands on the ball but scored a pearler of a try in their first real attack, after 11 minutes.

The ball was sent along the backline and winger Ben Smith made a fine run.

A couple of rucks later, the ball went wide to hooker Jason Rutledge, on as a blood replacement, who dived over in the corner.

The Sharks, though, quickly bounced back.

Winger JP Pietersen made a good break, carried on by No 8 Ryan Kankowski, who fed lock Steven Sykes to score.

A costly error from Berquist put the Highlanders right behind the eight-ball after 25 minutes.

The Highlanders first five-eighth dropped the ball cold in his own dead ball area and flying Sharks flanker Jacques Botes dropped on the ball to score.

That was a back-breaking try, as it pushed the Sharks 10 points ahead, and gave them a whiff of confidence.

Botes, though, was the bad boy 10 minutes later when he retaliated after a big tackle from Thomson and Steven Setephano.

Berquist knocked over the handy penalty.

Then after the hooter had gone for half-time, captain Jimmy Cowan sniped over to score.

The try came from good work by Thomson who made a break up the middle after the visiting side secured the ball from a lofty Israel Dagg kick.

Berquist could not add the extras to tie the score at the break.

Best for the Highlanders were Smith, loose forwards Alando Soakai and Thomson, while Tom Donnelly had a fine match.

Sharks fullback Stefan Terblanche was all class while Kankowski got through plenty of work.

But the best for the Sharks was their all-Springbok front row, who dominated proceedings.