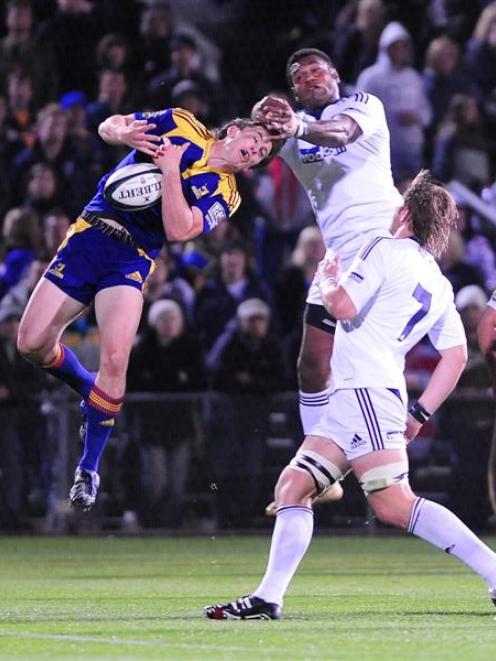 Highlanders wing Ben Smith grabs at a high ball ahead of Stormers counterpart Gcobani Bobo in their Super 14 clash at Carisbrook last night. Photo by Craig Baxter.
Those play-off hopes just disappeared into a dark night.

Playing a committed and accurate Stormers side, the Highlanders could not quite find the recipe to win their last home game, and have more or less kissed their play-off chances goodbye.

The Stormers might have only won two games before last night but they showed plenty of commitment at the breakdown and were staunch enough in defence against a slightly off key Highlanders side.

The home team suffered from a lack of accuracy in attack and, given the stop-start nature of the game, could not get any continuity into its game.

But the Stormers, who did not want to play with the ball in their own territory, fully deserved the win.

The Highlanders panicked in their own half at times and, when they did make breaks, the passes did not stick and the Stormers defence was too good.

The Highlanders scrum was average and the Stormers line-out was dominant.

Referee Matt Goddard did not help matters with some strange interpretations at the breakdown.

He handed out threats but showed little action against ill-disciplined play.

The match was locked up 11-11 with 15 minutes left but the Stormers went after a try, throwing everything but the kitchen sink at the Highlanders.

After a concerted period of attack and through more than 10 phases, the Highlanders ran out of defenders and Stormers second five-eight Peter Grant scampered over wide out with 10 minutes left.

The Highlanders went close but kicking the ball dead from a penalty was the end of their hopes.

The Highlanders' try was a good effort although it took a long time coming.

The side finally strung some phases together and it included a piece of class from fullback Israel Dagg after 52 minutes.

The custodian came into the backline, stepped inside a defender, and then fed winger Ben Smith who ran 30m to score his first Super 14 try.

The Stormers scored the first try off a Highlanders mistake when George Naoupu put in an ill-judged chip kick and it ended in the hands of Grant.

He fed big Fijian winger Sireli Naqelevuki who was too quick for the chasing defence.

Most impressive for the visitors was No 8 Luke Watson, who was all round the paddock and was never far from the ball.

Big lock Andries Bekker, in his first game back for a month, showed why he has worn the Springbok jersey.

De Waal showed a good boot, while outside him Grant looked assured.

In the Highlanders pack, Hayden Triggs got through plenty of work while centre Jason Shoemark showed some nice touches.

But the match was one that got away, although the Stormers have been threatening a win all tour.

The Highlanders struggled to get their hands on the ball in the opening 40 minutes and had little territory.

The Stormers were content to keep the ball away from their own tryline and use a kicking game while the Highlanders could not create any chances.

The Highlanders finally went in front when Mathew Berquist knocked over a handy penalty on the 25-minute mark after the Stormers were slow getting back from a ruck.

He added another three points seven minutes later for the home team to lead 6-0 at the break.

But the Highlanders were suffering from a wonky line-out and just could not get a toehold in Stormers territory in the first 40 minutes.

The Stormers had the bulk of the possession in the opening stanza and went close a couple of times, but tough defence from the home side kept them out.

If anything, the class loose forwards on display denied the game of any continuity in the first half as there were too many turnovers for either team to get momentum.

Highlanders loose forward Alando Soakai made a vital steal under the goalposts as the Stormers poured on to attack after 20 minutes.