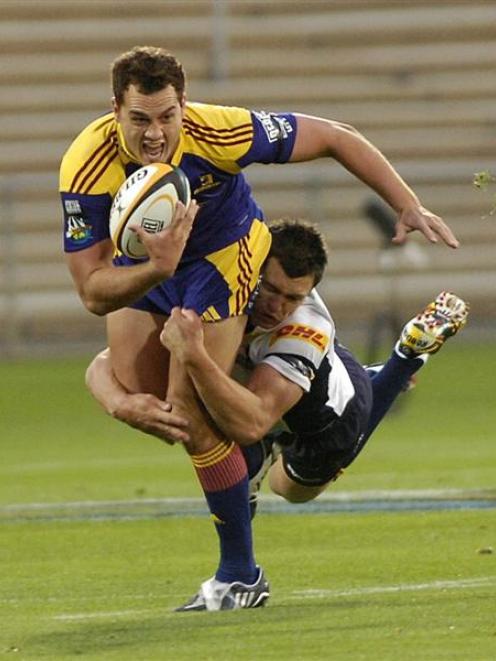 In a sport which is drowning in statistics there is only one - where you finish in the competition table - that really matters.

Winning one more game than last year, the Highlanders suffered from inconsistency, getting the bye at exactly the wrong time, not nailing games, and some - how shall we say it - puzzling refereeing decisions to dip out on getting near the top four.

They started the season with a last-minute loss to the Brumbies and the following week again went down in the dying stages, to the Hurricanes.

After being disposed of by the Waratahs, the team finally found winning form over the Crusaders in a low-scoring affair.

It then lost to the Chiefs in a match which could have gone either way, before embarking on a purple patch to beat the Cheetahs, Bulls and the Reds.

But the next week, the Highlanders went to Eden Park, got smashed by the Blues and then lost to the Stormers, Sharks, Lions and Force for a dismal end to the season.

That playing record suggests a side which was inconsistent, and that would be right.

The players on their day could be good such as in beating the Bulls.

But on other days they could be bad. Inconsistency at this level is costly. You've got to show up week in, week out.

But what is consistency in rugby ? Surely it is just doing the basics well, and not making silly mistakes.

Unfortunately there were just too many of those basic errors from the Highlanders.

Every game had them: Daniel Bowden dropping the ball from the kick off after scoring a great solo try against the Brumbies; Fetu'u Vainikolo tackling air as Laila Masaga scored for the Chiefs; Mathew Berquist dropping the ball in the in-goal to gift a try to the Sharks.

Good sides simply do not do that.

The Highlanders did not make those mistakes against the Bulls and that was why they won so well.

But straight after that win came the bye and, although coach Glenn Moore said it came at a good time, in hindsight it did not.

Momentum is so important in this competition.

Just look at the Chiefs.

On the back of that Bulls win, if the Highlanders could have put on another polished performance straight away, then they could have made great strides.

As it did the players went away for a week and could never recapture that form when they returned.

Why ? Answer that and every coach will want your phone number.

It was disappointing for the side to lose the last five games, especially when they were 17 points ahead of the Lions, and showed little aggression against the Blues.

The Blues match was spoiled by referee Stu Dickinson and his puzzling rulings.

The refereeing was a real mixed bag right throughout the tournament with officiating at the breakdown a complete shambles in some matches.

Everyone bemoans the loss of experience of players overseas but the retirement of a glut of good referees has had a big impact on the game.

The scrum, which had been travelling well, went wonky in the matches in South Africa.

Flanker Adam Thomson, who started every game, was the best performer.

He defended well, won line-out ball and made ground when needed, but the tightness of many games meant he was unable to range wide.

His display, along with fellow loose forward Alando Soakai, against the Bulls made a trip to Palmerston North a pleasant experience.

Captain Jimmy Cowan was his usual honest self and his captaincy developed.

He did himself no favours in the Blues match as Dickinson was at his dictatorial best.

Cowan probably needs another couple of years as captain to fully mature, but he had the respect of his team-mates.

Ben Smith and Israel Dagg were impressive young outside backs and grew as the tournament went on.

But for this side to make the top four, the goal for next year, consistency is needed.

Not to be consistently inconsistent.

Rookie of the year: Israel Dagg.

Five things the Highlanders need to do for next year:

In the past two seasons, the side has lost 14 games by eight points or less.

Turn even half of those losses into victories and the side will be further up the table.

In the side's seven victories in the past two years, the average winning margin was a shade under 12 points.

Israel Dagg: Only 20, he looked all class at the back, and played every minute of every game. A good boot and solid defender but talk of being the next Christian Cullen is premature 7.5

Ben Smith: A rookie, every week he looked better and better in his role. Showed nothing can beat a solid bag of skills and a good rugby brain 7.5

Fetu'u Vainikolo: Wanted - the player who last year had speed and guile which stood out in the Highlanders. Because this year it was not Vainikolo who seemed to be lost at times and went missing on defence. Must come back well in the Air New Zealand Cup for Otago 5

Kendrick Lynn: Has plenty of pace, and a good footballer. Never really got many chances, but looked tidy in everything he did 6

Jason Shoemark: Solid, reliable, and pretty much error-free. But maybe lacks the X factor which can make and break games 6.5

Jayden Hayward: Much was talked about Hayward before the season but never really got a chance, starting only two games. Not the biggest, his size may have been against him, especially paired with others of similar stature 6

Johnny Leota: Never got a good run of games, but always made the advantage line. Bad hands at times did not help and threw the occasional wayward pass 6

Daniel Bowden: Did improve from last year, and scored a couple of nice tries. Tricky on his feet, his goal-kicking improved, but still prone to a costly error. The backline looked a better attacking unit when he wore the No 10 jersey 6.5

Mathew Berquist: Much was made of having two kicking options when playing Berquist and Bowden together. But Berquist's kicking was average and his hands too slow at moving the ball on. Seemed to tire as the season went on. Won't have great memories of Durban 5.5

Jimmy Cowan: The captain was his usual combative self. Got through plenty of work on defence but many times could not find support players on attack. Will not be swapping Christmas cards with referee Stu Dickinson 6

Sean Romans: Did not see much action but when he did, played well. Has a good kick on him, and plenty of pace 6

George Naoupu: Had a stand-out match against the Cheetahs but lacked consistency. Was hard to stop but went missing on defence 6

Steven Setephano: In and out of games and the side. If the Highlanders wanted to dominate, the No 8 had to be at the fore. Neither were 5.5

Alando Soakai: Rarely beaten, he was all energy and aggression. Pilfered plenty of ball and made some good runs. An impressive effort 7.5

Adam Thomson: A stand-out effort which should be rewarded with an All Black jersey. Got round the paddock, made plenty of good tackles, and effective at the breakdown. Out-played rivals for the All Black jersey 8

Tim Boys: Only got one start, but did all that was asked of him, and never let anyone down 6

Tom Donnelly: Injured before the season started so took a while to get going. Had a couple of average games in the middle of the season but played well in the final three matches, and would not look out of place in a national side. Should make Junior All Blacks at least 6.5

Hayden Triggs: The usual 100% effort, and had a top match in the win over the Bulls. Dropped a bit of ball 6.5

Josh Bekhuis: Grew a lot in the first half of the season and swapped places with Triggs for most of the campaign. Will be better for the experience 6.5

Clint Newland: Seemed to be always struggling for fitness. Rarely played a full 80 minutes, and the scrum looked shaky at times, especially in South Africa 5.5

Chris King: An impressive season, marked by cutting All Black prop Ben Franks in half in a scrum. Should have started more games 7

Jamie Mackintosh: Injured in the first game and then initially came back well. But went missing in the last few games and appears to have slipped out of All Black reckoning 5.5

Jason Rutledge: Did well when he came on, and hard to stop. Would not bet your house on him throwing the ball in straight 6